Intel is officially launching its 11th gen Core processors for desktops, the RKL-S series, sometime in Q1 2021 (i.e. before the end of this month), with rumours that they could be released mid-March. The desktop processor range was revealed at CES 2021, in part, with an overview of what technologies would be coming to the CPUs, and a closer look at the flagship Core i9-11900K. Atypically some supporting chipset motherboards, specifically high-end Z590 chipset based models, became available in February. 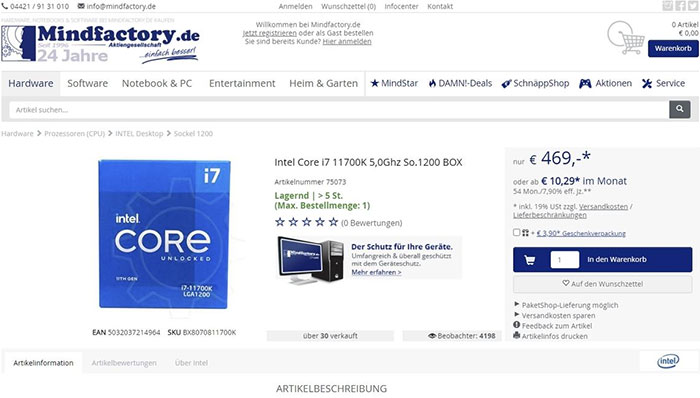 Reports from Germany over the weekend indicate that one of the biggest tech retailers over there, Mindfactory, was selling Intel's Core i7-11700K. HardwareLuxx editor Andreas Schilling took to Twitter yesterday to inform followers that "Some of our forum members received their Core i7-11700K orders," and even more interestingly, "first benchmarks are in." The social media post was expanded upon by a website article this weekend, and ComputerBase similarly published a rolling updated article with benchmarks and observations from its forums. 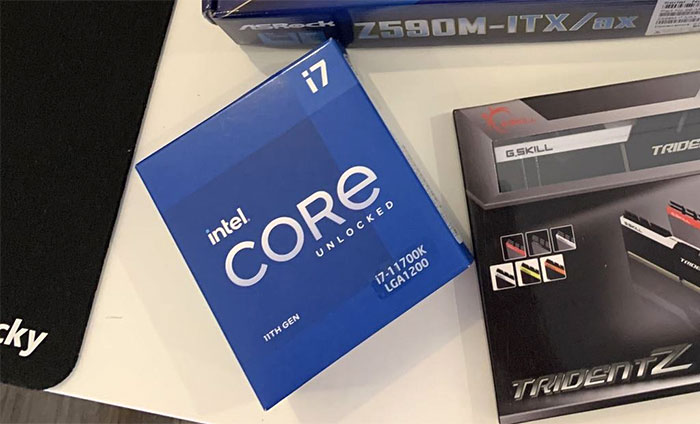 Before looking at some benchmarks, the Mindfactory sale must be commented upon. The etailer now has no stock up for sale and the product page indicates that 120 Intel Core i7 11700K CPUs sold this weekend. HWLuxx comments that when this processor went up for sale at Mindfactory, some other retailers also listed it but then took down their listings. ComputerBase indicates that these Intel CPUs were listed for three solid days by Mindfactory before stock ran out (120 units). It adds that Mindfactory support was assured by managers that these RKL-S CPUs could be sold to customers. As well as the enthusiasts enjoying these high tech treats, testing and sharing the results provided by these shiny new processors, a number of the CPUs have been spotted on eBay at "inflated prices".

Above I've reproduced some charts from HWLuxx. I set the previous gen Core i7-10700K as the baseline. Some other tests have been shared by forum users, such as the CPU-Z benchmark and various SSD storage tests. 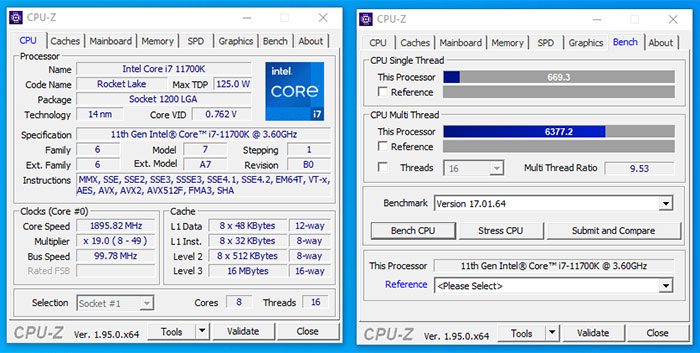 When these processors officially land please return to HEXUS for our usual in-depth reviews with tests undertaken and compared in a wide range of synthetics, apps, and games.

Posted by watercooled - Mon 01 Mar 2021 10:45
I'm surprised this retailer doesn't get sanctioned by the manufacturers somehow. From what I remember this is far from the first time they've ignored release dates, and I believe they've been the source of products behind a few NDA-breaking reviews too?
Posted by trillo_del_diavolo - Mon 01 Mar 2021 11:18
I'm sure it is sanctioned by Intel, too bad the results are mediocre at best. I'll wait for an in-depth analysis on AT to see if the improvements are real or just turbo clock tricks.
Posted by watercooled - Mon 01 Mar 2021 16:09
It's not just about clock speed - Rocket Lake introduces a new core, after having been stuck on fundamentally the same Skylake core since 2015. How much of an improvement that brings in applications and games is still an open question, largely because Intel already pushed Skylake so hard in terms of clocks and power.
Posted by QuorTek - Mon 01 Mar 2021 18:06
The downside is that so much of Intel you also need to change the Motherboard all the time instead of plug and play features in a figure of speech, it is seriously what is holding me back from buying Intel for my next highend build.
Posted by bae85 - Mon 01 Mar 2021 19:43
Doesn't matter how much you polish a turd, it's still a (hot) turd.