Earlier in the week a number of tech sites picked up a Tweet from a custom PC builder which asserted that AMD Ryzen 5000 CPU failure rates were too high. The PC builder shared data that suggested he/she had bought about 200 AMD Ryzen 5000 CPUs and that approx 9 per cent were DOA. The biggest site that picked up and ran a report from this (since deleted) Tweet was PCMag, and the story gave the author an opportunity to vent about buying a Ryzen 5800X that needed returning, due to BSODs.

If the data was genuine, why has the original Tweet been deleted by the author? I don't know that but there is a weight of evidence from German tech retailer MindFactory, with much bigger samples, that suggests AMD Ryzen 5000 CPU failure rates, specifically RMA rates, are very ordinary and basically of the same magnitude as Intel processors. In data collated by Sofaboy90 on Reddit, and highlighted by HardwareLuxx's Andreas Schilling on Twitter, I've cobbled together a quick MindFactory modern CPU RMA rate table below:

Perusing the above, it looks like the Ryzen 5000 series CPUs are even more reliable than the previous gen desktop CPUs from AMD. If you are interested in the RMA rates for other computer parts you can head over to the appropriate product page at MindFactory (Ryzen 9 5900X example) and it is listed next to a thumbs-up icon near the review section of any product page. Sofaboy's data was a couple of days old, so I went through and updated the Ryzen 5000 percentages just now.

Another European source, SweClockers, reports that it quizzed Swedish resellers, who said that "Ryzen 5000 is no more prone to errors than any other CPU series".

It is hard to know why the US-based custom PC maker had such a bad experience when MindFactory customers evidently do not. Some suggested it was user error in installing the CPUs with delicate pins perhaps being damaged - though such an obvious mistake sounds fanciful for a pro custom PC builder, or his/her apprentice, to make. 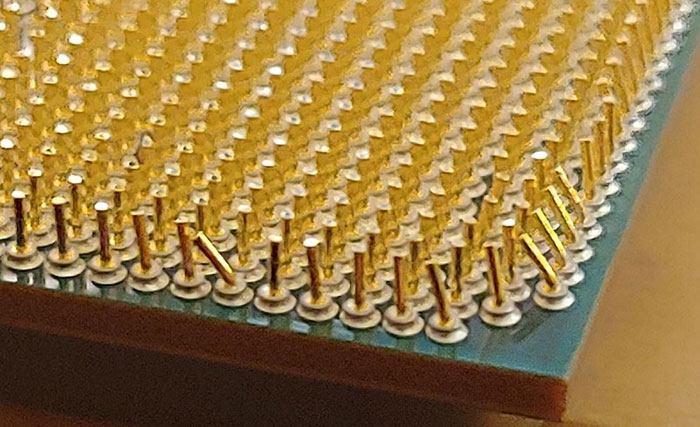 This R5 5600X was damaged in transit, in Amazon soft-packaging

Before we sign off there is an interesting counterpoint from former Intel performance guru Francios Piednoel. He says that he knows Taiwan ODM sources with similar experiences of higher failure rates for AMD Ryzen 5000 CPUs but didn't flesh out those observed rates or mention any ODMs by name.

Have any HEXUS readers had to RMA a CPU recently?

Intel New Mexico manufacturing upgrade to cost $3.5 billion QOTW: Do you overclock? AMD FidelityFX Super Resolution may arrive next month Sony tipped to be preparing a PlayStation 5 Slim with 6nm APU Intel employee Tweets "DG2 is right around the corner"

MonkFish
Let the mud slinging begin. I guess from these “leaks” that the new intel chips about to be launched aren’t as good as first indicated. But that may be the cynic in me talking

ive seen a fair few people on discord channels complaining about the 5800x specifically, it does run hotter than the rest of the lineup and i suspect a good number of the returns are due to lack of good enough cooling
Posted by Tabbykatze - Thu 18 Feb 2021 11:26
Considering it was just a small time PC builder moaning where larger ones are not, I would suggest the issue is PEBKAC. OEM vendors are the first to moan when their RMA rates are a little higher, they were happy to discuss with Turing and RDNA1 and considering how long these CPUs have been out, there would have been far more than one small timer having a pop.

Smells like a FUD piece, frankly.
Posted by Kanoe - Thu 18 Feb 2021 11:33
Had an issue just over a year ago with a new 3600X, it wouldn't sit in the socket of the mobo properly and as such the pins weren't making correct contact so depending on the mounting pressure you could get on it different slots on the board would or wouldn't work.

Can't say if it was the CPU or the Motherboard at fault but RMA'd both and got replacements next day and the replacements were fine.

These things happen, I think as long as there is no systemic issue (like 10% of products not working) that it's more about the retailer experience when something does go wrong and that is out of control of the chip makers.
Posted by Phage - Thu 18 Feb 2021 11:36

BattleBadger
ive seen a fair few people on discord channels complaining about the 5800x specifically, it does run hotter than the rest of the lineup and i suspect a good number of the returns are due to lack of good enough cooling