An interesting Intel processor has popped up in the Geekbench online results browser, and was recently spotted by @benchleaks and VideoCardz. Raising its 10nm head above the parapet for the first time is an Intel Alder Lake-P CPU with 14 cores and 20 threads. These P series processors are expected to become the first high-end mobile series with Intel's hybrid technology inside. Remember, Lakefield targeted ultra low power portable devices.

So, 14C/20T – how is a processor designed to result in this configuration? It is all to do with the permutations of big cores with Hyperthreading, and small energy-saving cores without. VideoCardz consulted a previously leaked chart with all Alder Lake-S and P series configurations that will be available. This chip is thought to have the following processor blocks:

Checking over the Geekbench results you can see that the particular Alder Lake-P processor tested came with a base frequency of 800MHz, and a turbo of 4,700MHz. Through the test the processor ran at an average 4,270MHz. With the feeds and speeds as shown, VideoCardz reckons this processor will be the flagship mobile Alder Lake-P SoC. 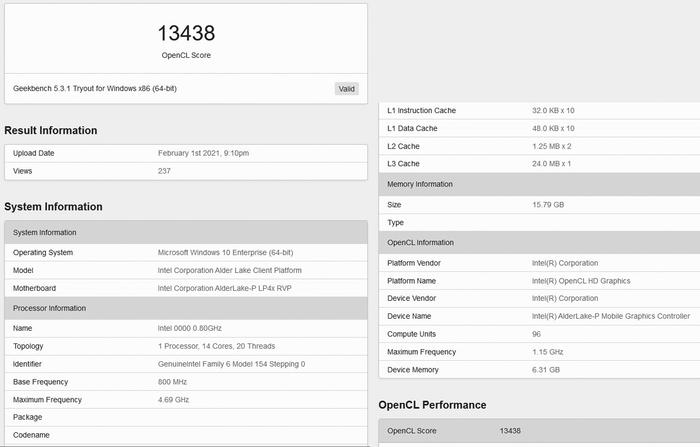 Of course Alder Lake-P will also contain GPU cores and this particular Geekbench run tested the chip's OpenCL performance, rather than its hybrid CPU cores. With 96 EUs running at up to 1,150MHz, the integrated graphics eked out a Geekbench OpenCL score of 13,446. That puts it in the same performance bracket as a desktop GeForce GTX 660 Ti graphics card or the AMD Radeon Vega 11 graphics integrated into the likes of the Ryzen 5 3400G.

Intel still has several months to work on and optimise the hardware, firmware and drivers to get Alder Lake mass-market ready (supposed to arrive in H2 this year). It is a radical change but Lakefield will have given it a clearer view of the potential pitfalls of hybrid processors coming to Windows.

Posted by watercooled - Tue 02 Feb 2021 10:24
I am eager to see how this goes, especially with launching so soon after Rocket Lake. On the other hand I'm also curious how scheduling will work on Windows with asymmetric cores, particularly as I've heard rumours the small/big cores won't necessarily have identical instruction capability?
Posted by Tabbykatze - Tue 02 Feb 2021 11:13
I'm expecting this to be a pretty problematic launch between windows scheduling, application optimisation and the general message that the CPUs are trying to convey.

watercooled
I am eager to see how this goes, especially with launching so soon after Rocket Lake. On the other hand I'm also curious how scheduling will work on Windows with asymmetric cores, particularly as I've heard rumours the small/big cores won't necessarily have identical instruction capability?

The Windows scheduler got a fairly major upgrade recently (again) to help with Ryzen and these Intel cpu's. Of course it's no good if you're back on pre-win 10 os's. I did recently help someone with a Win 7 Ryzen build and it's a big step down from Win 10 on a Ryzen and you can feel the scheduler and other things holding it back
Posted by kompukare - Tue 02 Feb 2021 11:52

watercooled
I am eager to see how this goes, especially with launching so soon after Rocket Lake. On the other hand I'm also curious how scheduling will work on Windows with asymmetric cores, particularly as I've heard rumours the small/big cores won't necessarily have identical instruction capability?

While Intel are actually pretty good with software like compilers, this is a very big ask.
Moving a process from, for example, an Atom-like core without AVX2 or whatever to a Core core with those instructions or vice versa doesn't seem like something the kernel could do without the application being aware: you've been moved, please re-interrogate the CPU to find out what capabilities you now have and restart yourself.
Posted by watercooled - Tue 02 Feb 2021 12:41
Yeah it's the AVX instructions I was thinking of myself, I'm not sure how they could reliably move tasks to the small cores without breaking things. Perhaps applications could be pinned to the large cores, but then you wonder what's the point in having the small cores?

Another thing, is I wonder how much of a difference this is really going to make on desktop. On mobile and perhaps even laptops where every Joule matters then this sort of system could work out, but I'm struggling to think how it would work on desktop where downclocked ‘big’ cores only take a few watts anyway and fall into the background of overall system power consumption. It's not that I'm not in favour of improving power efficiency on desktop, but there's plenty of other low-hanging fruit to improve desktop power consumption!