It appears that a slide, accredited to MSI, has leaked and it outlines the key specifications of Intel's 11th gen Core processors for desktop PCs. Intel officially launched its codename Rocket Lake-S (RKL-S, or just RKL) processors during CES 2021, but it didn't provide specific SKU specs - other than a smattering of details shared in a preview of the flagship Core i9-11900K.

The purported MSI slide has been acquired by VideoCardz and, as you can see, was constructed to compare the 10th and 11th gen top tier 'K' CPUs from the Core i5, i7 and i9 lines. The purpose of the slide isn't clear but it might be provided to MSI's tech marketing teams around the world, or have been part of an internal document discussing the latest 500-series motherboards. The non-Roman text is Japanese and says 'Series Roadmap'. 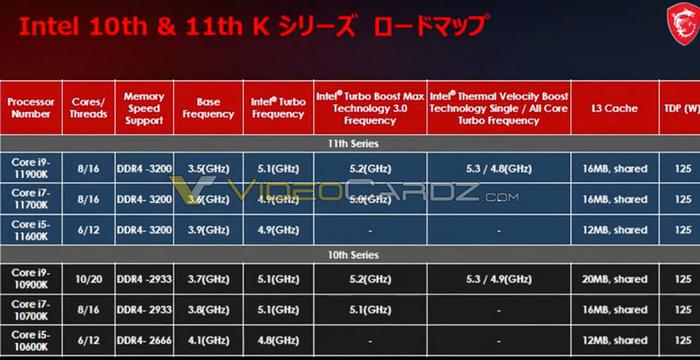 Starting from the top of the chart you can see that the Core i9-11900K is an 8C/16T part with base/boost of 3.5/5.3GHz (TVB) and can clock as high as 4.8GHz in all core turbo. It appears to have 16MB L3 cache, supports DDR4-3200 memory, and have a 125W TDP. As mentioned by the editor on launch day, "Rocket Lake-S actually goes backwards in terms of core count," but this is mainly due to the new Xe graphics taking up die space, and with an up to 19 per cent CPU IPC uplift it should still cement its place atop of the Intel consumer desktop pile.

The Rocket Lake-S processors are expected to become available from sometime in March, and a week or so ago we saw some Euro pricing rumours, which are worth a look.

That's just Intel spinning a story, it really doesn't seem to be due to the ”massive Xe die“, it is observably because they've hit the absolute limit of what they can do and you could argue because they tried to fit more onto the die, they had to sacrifice but then why didn't they just make a bigger die like they did in previous generations?

Or just not had as large an iGPU in the first place, they even are selling dies without the iGPU so why did they not just do an AMD and decided that the main desktop stack are definitively going to be used with a dGPU?

The fact that every sku has a 125w TDP is quite telling how hot these are going to be, dropping two cores and making a backward step for an iGPU is just dumb as a box of frogs to then say ”oh yeah, it was because of the iGPU".
Posted by edmundhonda - Thu 28 Jan 2021 14:29
The TDP is (supposedly) derived from the base clock numbers, so the 11900k is going to be slightly worse in terms of ghz/w compared to the 10700k. I think they promised ‘double digit’ IPC improvements, will be very amusing if that's mostly offset by lower clocks.
Posted by Corky34 - Thu 28 Jan 2021 17:40

Tabbykatze
The fact that every sku has a 125w TDP is quite telling how hot these are going to be, dropping two cores and making a backward step for an iGPU is just dumb as a box of frogs to then say “oh yeah, it was because of the iGPU”.

Going on what's being reported (buckets of salt required) a 360 AIO struggles to keep an i9-11900KF under 100°C so you're probably spot on in assuming they reduced the core count because of temperatures.