Intel has wrapped up its Architecture Day 2020 webcast which was stuffed with information on new CPU and GPU and related technologies. Probably the biggest announcement of the day was of the new transistor technology dubbed '10nm SuperFin Technology'. Intel refers to this as "the largest single, intranode enhancement in the company’s history," and goes so far as claiming the enhancement delivered is comparable to a full node transition. 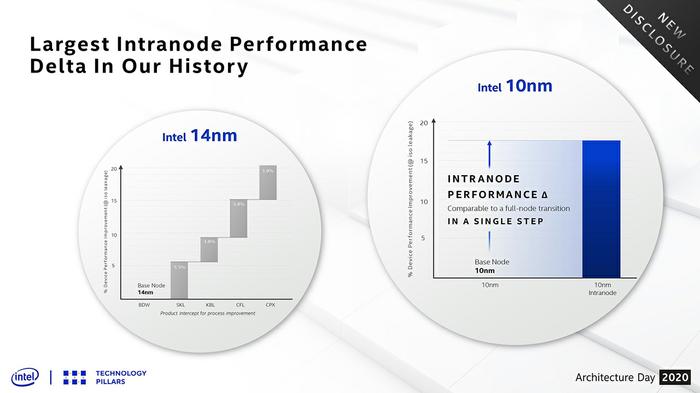 In brief, 10nm SuperFin technology is a refinement of FinFET with new SuperMIM capacitors in play (MIM is short for metal insulator metal). Intel debuted FInFET in 2012 with Ivy Lake CPUs, giving it a notable boost at the time. Now it seems to be pitching SuperFin as a tech that can help plug the disappointment gap for customers waiting for its 7nm processors. SuperFin technology offers enhanced epitaxial source/drain, improved gate process and additional gate pitch, which are claimed to deliver greater performance by:

Today Intel takes the Willow Cove cores for optimised CPU performance, adds in AI accelerators - and creates Tiger Lake - the first Intel SoC to come packing Xe-LP graphics on board. Thus, as well as the above flagged general compute prowess, it delivers "massive AI performance improvements, [and} a huge leap in graphics performance," according to Intel's own tests. Thunderbolt 4 is another of this processor's many charms, which include: 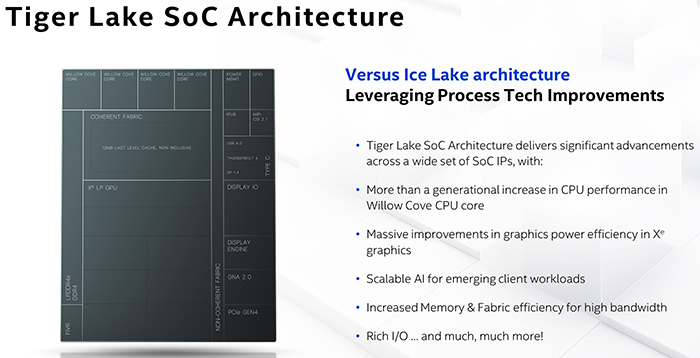 In addition to the above, Intel confirmed that it was advancing to a hybrid architecture with its upcoming Alder Lake. This takes the baton from the Lakefield processors which debuted recently and will bring the tech to larger devices such as traditional laptops.

In the data centre, Intel claims that its Ice Lake parts, the first 10nm Xeon Scalable processors, will arrive towards the end of 2020 and deliver benefits such as total memory encryption, PCIe Gen 4, eight memory channels, and instruction set enhancements that speed up cryptographic operations.

Sapphire Rapids will succeed Ice Lake to deliver SuperFin tech to the data centre and additional benefits such as DDR5, PCIe Gen 5, and Compute Express Link 1.1.

Calls it the “largest single intranode enhancement,” in its history.

No, it's the single largest failure that was finally fixed 5 years later…in its history.
Posted by Friesiansam - Thu 13 Aug 2020 17:18

Tabbykatze
No, it's the single largest failure that was finally fixed 5 years later…in its history.

Indeed, very late and, still lagging behind AMD.
Posted by CAT-THE-FIFTH - Thu 13 Aug 2020 17:21
TBF,Intel were the first to mass produce Finfets,so it will be interested to see how this pans out!
Posted by 3dcandy - Thu 13 Aug 2020 17:29
I like the bit where it says waiting for 7nm processors…
Posted by ik9000 - Thu 13 Aug 2020 17:29
will total memory encryption bring any benefits? Won't this come at latency penalty? Is it their new way of dealing with side channel and bypass attacks - rather than solve the problem encrypt the information so memory leaks can't be easily understood?