Intel has published its latest quarterly financials. On the surface, and going by the swanky infographic things are tickety-boo. Intel CEO Bob Swan started his results statement by proclaiming that "It was an excellent quarter, will above out expectations…" The chipmaker raked in record Q2 revenue of $19.7 billion (20 per cent up YoY), but some smaller business segments were significantly down, namely IoT and Mobileye. However, a bigger sting in the tail was hidden behind the statement that Intel was "accelerating 10nm product transition," as following closely behind in the highlights it admitted that "7nm product transition [is] delayed versus prior expectations".

Considering the 10nm roadmap and schedule first, Intel says it is increasing volumes and expanding its 10nm lineup. The product portfolio will consist initially of 10nm Tiger Lake CPUs, launching soon in a flotilla of laptops via Intel partners. Still planned for the end of 2020 is Intel's launch of the first 10nm-based server CPU 'Ice Lake'. 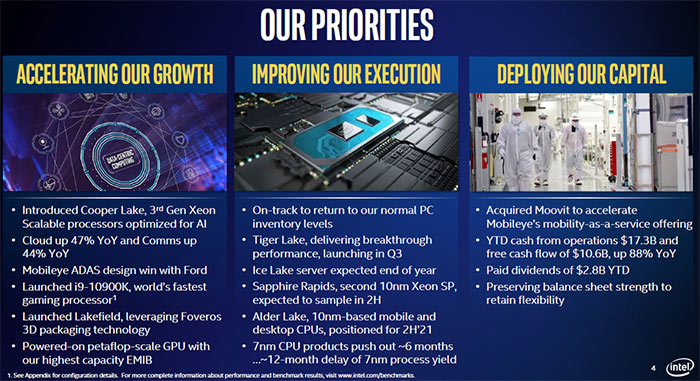 PC enthusiasts and DIYers will have to wait until H2 2021 for the first 10nm processor for desktop PCs. Early information about these 'Alder Lake' CPUs already seems to be seeping out. For example we have already seen indications that it will use the LGA1700 socket and will be a hybrid design. Intel says it will release a new 10nm-based server CPU, code-named 'Sapphire Rapids' in approx the same timescale.

So, it looks like Intel is having some 7nm transition difficulties. It states that the primary reason for slippage is production yields. This latest difficulty will take up to a year to correct; however Intel thinks it can start to introduce 7nm-based CPUs with just a 6-month delay. That sounds like we will see a limited market roll out until yields improve, which reminds me of the Ice Lake 10nm+ mobile CPU roll out.

Tech industry analyst Patrick Moorhead Tweeted about Intel's financial success as measured against expectations. However, he notes that the stock is getting "hammered" in the markets due to the 7nm delay statement. On the flip side, AMD shares are surging - up nearly 9 per cent in afterhours trading.

Posted by Tabbykatze - Fri 24 Jul 2020 10:46
As a naive outsider to the market, I think it's getting to the point now it is obvious that Intel has lost the foundry war and just needs to focus on architecture, that is unless they're going to curve ball us all with a 3/5nm node in 2021…

Tabbykatze
As a naive outsider to the market, I think it's getting to the point now it is obvious that Intel has lost the foundry war and just needs to focus on architecture

I think it's hard for them to focus any more on architecture - that's already what they've had to do for some time.
Posted by Yoyoyo69 - Fri 24 Jul 2020 11:37
Good news all round really, AMD will contintue ti gain market share.

Judging by this announcement, a decent portion over the next year (and likely more), will be at Intels expense.

Should create a healthier market for consumers.
Posted by [GSV]Trig - Fri 24 Jul 2020 12:04
Do intel really need to spend time and money on die shrinks? Why not let others do the groundwork and testing then just jump to 7nm+ when the process is more efficient? I don’t see them loosing by any great strides still using 12nm or whatever they’re on at the mo…
Posted by kalniel - Fri 24 Jul 2020 12:11

'[GSV
Trig;4234516']Do intel really need to spend time and money on die shrinks? Why not let others do the groundwork and testing then just jump to 7nm+ when the process is more efficient?

You're suggesting Intel use someone else's fab for CPUs instead of their own? That would be a huge culture change.