Professional and official looking Intel presentation slides have leaked via VideoCardz. The slides sketch out the key specs of three processors that will be important to Intel - unlocked flagships from the Core i9, i7 and i5 families. Thanks to the slides we get an early taste of the appeal of these Intel processors, the top boost speeds, the physical CPU core counts, and thread counts.

Intel's upcoming Core i9-10900K processor is claimed by Intel to deliver "elite real-world performance". This stance mines a vein Intel has been picking at for some time - that its chips might not be benchmark busters but they will, particularly in gaming, have some edge over the competition. Intel goes on to say that this Core i9 will "produce high framerates in your favourite games, even under extreme multi-tasking workloads". 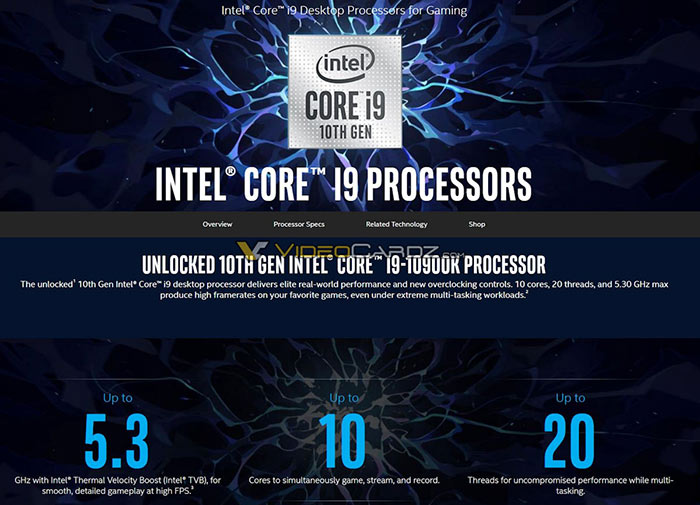 Moving onto specifications, the new Intel Core i9-10900K is a 10th gen Comet Lake-S processor made on Intel's 14nm process. Under the heatspreader you have 10 cores, with 20 threads, and a 5.3GHz maximum claimed boost speed. The 5.3GHz is achieved using Intel's Thermal Velocity Boost tech (Intel TVB) which relies on any 'opportunity' afforded by premium cooling. Lastly, as a 'K' processor there will be some scope for overclocking and Intel says it has some "new overclocking tools," for this purpose, in the purportedly leaked presentation materials.

Intel's Core i7-10700K is said to be capable of delivering smooth gameplay while recording ans streaming content. Its 8 cores, 16 threads and 5.1GHz boost. Unlike the mobile Comet Lake Core i7 this Comet Lake-S chip doesn't get TVB, instead it relies on Turbo Boost 3.0 tech. 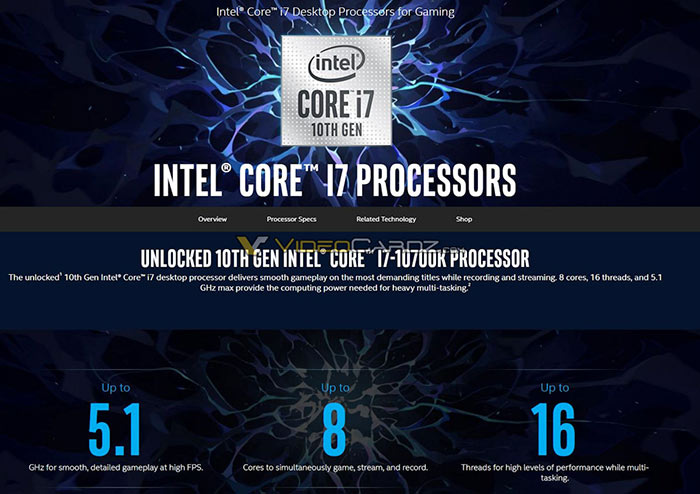 The Intel Core i5-10600K will be a 6 core, 12 thread part with a maximum boost clock of 4.8GHz, according to these slides. Intel characterises it as being able to deliver "great gameplay experiences". But doesn't recommend it for streamers, as it is only up to "light multi-tasking while gaming".

All three chips outlined above come as is, with a UHD 630 iGPU, but you can choose the 'KF' suffixed version - sans-GPU - if you wish.

It will be really important for Intel to price these parts appropriately as its toughest fight against AMD at this time is in the desktop arena. Intel designs still run rampant in the premium gamer / creator laptop field with a few exceptions for now.

Maybe next year we'll see some competition and innovation in the CPU market eh :)
Posted by Terbinator - Mon 06 Apr 2020 12:00
Are not getting Ice Lake at all this year for desktop?
Posted by mers - Mon 06 Apr 2020 12:30
I think Intel are at the stage of desperation and plain out of options to compete against AMD's forward progress. Tweaking and wringing out what they can out of what chip tech they have at present. This could be their finale assault in fear of the next implementation of Ryzen that AMD will undoubtably throw into the mix. I've never been a dedicated fanboy to any chip maker from my early days of buiding PC's from 286's using Intel , AMD , Cyrix , IBM and Transmeta I think. Down the line I've usually opted for AMD on the basis of value for money plus an added abhorance for Intels underhand business practises.
Had AMD had the financial means and advertising prowess years back it might have been a different story years ago. Had it not been for American defence contracts back then AMD would have folded. I attended a computer show once donning a “T” shirt I had printed
the “ Intel Inside” Logo on but had altered it to read AMD inside. There were 2 Intel reps there , one thought it funny the other was well pissed off at me , no humour some peeps.
Sorry Intel but at the moment as I sit here with my new Ryzen build which followed
my previous Phenom 11 X4 your smugness , overcharging , head hunting and desperate measures do not impress. At some point the tables will turn I'm sure, Intel has the resources and finance to do this but at the moment AMD is leading development and I'm pleased for them having been classed as second rate to many for so long. Intel need to get off their arses and produce something that is much better , we , the “Joe Public” need competition at competitional prices that are affordable encompassing all the newer tech aviliable.
Posted by LSG501 - Mon 06 Apr 2020 13:25
Um if you take out the clock speed aren't AMD nearly on a par with Intel now in most games, even more so if they've been optimised for both Intel AND AMD.

This is just more intel trying to fool the people that aren't ‘tech savvy’ into just buying intel due to brand awareness. Oh and LOL at the elite real world performance… is that a world where everything is single core because in my real world, most of my programs use multiple cores..