Intel semiconductor machinery partner ASML presented at the IEEE International Electron Devices Meeting earlier this week and raised eyebrows with an edited version of an Intel processor scaling roadmap. Intel originally showed off this roadmap back in September. However, ASML made it rather more interesting by clearing the fog and overlaying the nanometer node sizes alongside corresponding years, spanning 2019 through to 2029. 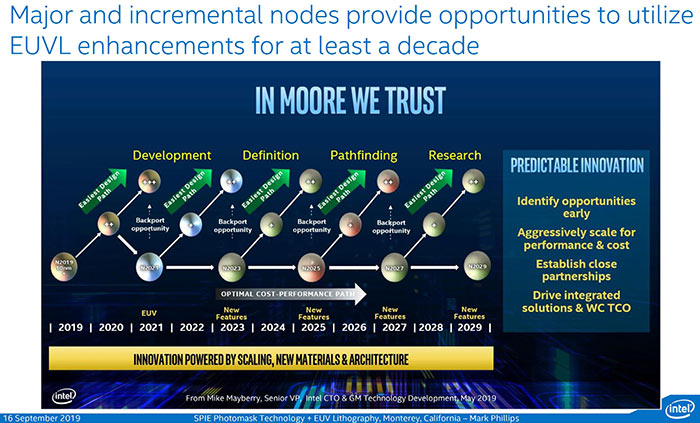 Above you can see the original Intel roadmap slide from September. Below is the ASML edited version superimposing numerals indicating node sizes. As AnandTech notes, people could have extrapolated these from 2019 10nm+, ++ and so on, themselves - but it is good to see it in 'ink'. 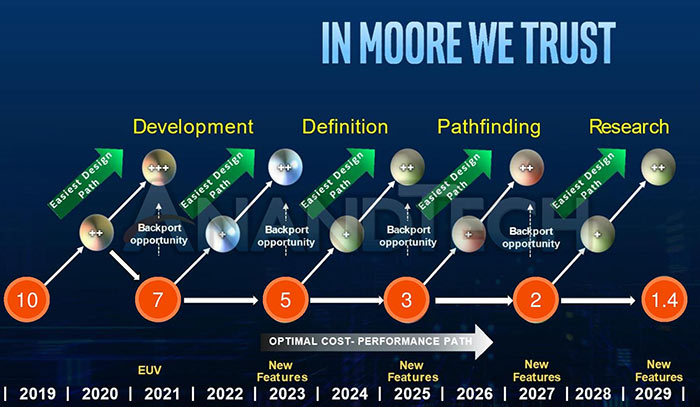 Overall the slides represent the intended return to a two year cadence for Intel manufacturing process node upgrades. It shows we are now at 10nm, as far as Intel is concerned, and we will see 7nm EUV in 2021, 5nm and new features in 2023, 3nm in 2025, 2nm in 2027, and the first time we have seen charted or mentioned with respect to Intel: 1.4nm in 2029. This 1.4nm scale means a processor feature could be as small as the length of 12 silicon atoms in a row.

Between each node will be a yearly iterative + version - a 'tock' following the process 'tick', if you like. Furthermore, every node shows an opportunity to back port new process features to the previous node, shown as ++ versions. This can help maintain a smooth flow of product if there are any production issues going forward. 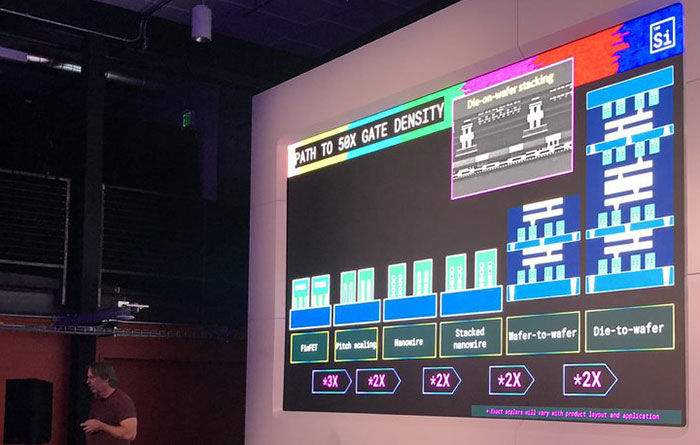 Overall it looks like Intel and ASML are aiming to keep step with Moore's Law for the next decade but this might be more of an optimistic schedule than a cold hard realistic plan. Indeed, beyond 2023 Intel is still in the ‘path-finding’ and 'research' mode, notes AnandTech. Meaning that it is still looking at and assessing new materials, new transistor designs, and so on. To get to 5nm and beyond Intel is considering introducing stacked nanowires and 3D wafer stacking, as highlighted in a presentation by Jim Keller this summer, marking the 50th anniversary of Moore's Law. See the slide above, which seems to chronographically correspond to the slides atop of this article.

Wrinkly
Will Intel still be a thing in 2029?

Nice joke, Intel is still a giant. I expect them to bounce back to the top in 1-2 years. If they don't, then maybe they are in a little trouble, they still have plenty of cash to burn though.
Posted by Otherhand - Thu 12 Dec 2019 11:55

*whispers “Intel roadmap” sexily*
Posted by six_tymes - Fri 13 Dec 2019 16:29
I hope I am around to see when any company gets to below 5nm. It'll be amazing to be able to use a cpu at such small transistor sizes. I just cant see how any company will prevent the increase of cross talk, I would think as die's shrink, cross talk will go way up?