Intel expanded its 10th gen Intel Core processor offerings today, with eight additional SKUs. The new processors will fit in the U- and Y-Series 10th gen Intel Core processors for mobile computing and were previously codenamed Comet Lake. Intel refers to the new processor selection as "performance powerhouses that bring double digit performance gains compared with the previous generation." Some of the chips launched today include the first 6C/12T processors ever in the U-Series, and the range offers faster frequencies, faster memory interfaces, Wi-Fi 6 and broader scaling of Thunderbolt 3.

Highlights of the new range of Comet Lake processors are as follows: 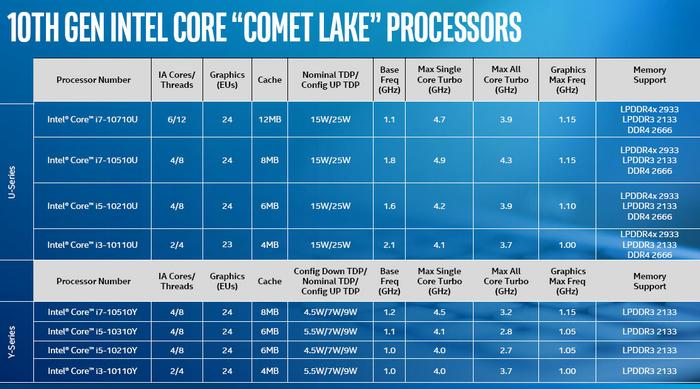 Unlike the previously announced Ice Lake parts from earlier this month, these 10th gen chips are fabricated at 14nm (one gen – two architectures). Intel reminds us that the 10th gen Intel Core processors include the intra-node optimisations on its highly optimised 14nm process technology that enable up to 16 per cent overall performance gains and over 41 per cent better productivity and multitasking in apps like MS Office (Intel Core i7 -10710U (CML-U 6+2) vs Intel Core i7-8565U (WHL-U4+2)). None of this extra performance impacts battery life, insists Intel, and the faster modern connectivity options are a boon to users too.

Intel says that laptops and 2-in-1s powered by the new 10th Gen Intel Core processors will be available from PC manufacturers ahead of Xmas. Some Comet Lake systems are heading for Project Athena verification too, it says. 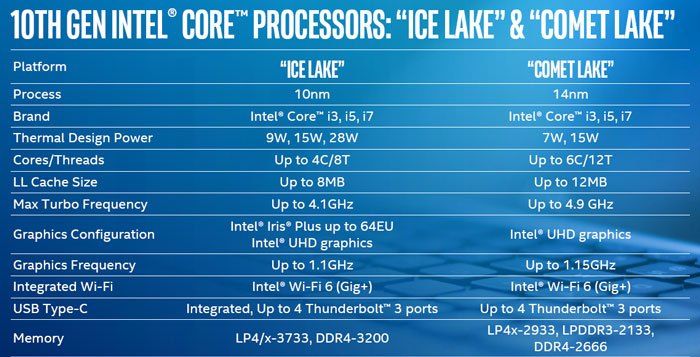 Posted by Tabbykatze - Wed 21 Aug 2019 16:33
I find it really weird they are carving up their own Laptop stack and releases two very different processor ranges both for the architecture and node.

My only real thoughts are that yields of 10nm are so low they have to supplement this by providing an “inferior” product as backup.

Intel is competing with itself and that only creates confusion in the OEM and vendor markets.
Posted by LSG501 - Wed 21 Aug 2019 18:50
Nope, that doesn't look confusing at all….

Man I miss the days where you could easily tell where a cpu sat in the pecking order
Posted by philehidiot - Wed 21 Aug 2019 21:48

LSG501
Nope, that doesn't look confusing at all….

AMD have got this down. Everything just makes sense and they don't have far too many CPUs. I've grown up building my own PCs and being up to date with CPU / hardware ranges. Even I am struggling to keep a handle on the Intel range. I suspect this is intentional. Confused buyers are not savvy buyers and may spend more just to ensure they're not missing out because they can't make sense of it all.
Posted by Tabbykatze - Wed 21 Aug 2019 22:39

philehidiot
…Even I am struggling to keep a handle on the Intel range. I suspect this is intentional. Confused buyers are not savvy buyers and may spend more just to ensure they're not missing out because they can't make sense of it all.

That is almost certainly happening in the server market. There are so many sub skus, sku extensions and extra addons that if you're not paying attention 110% you're either paying more for unused features or buying an underpowered feature limited sku.
Posted by aniilv - Wed 21 Aug 2019 23:25
1.1ghz i7