Purported Intel mobile and desktop processor roadmaps have leaked out, reaching as far as Q4 2021. The Dutch site Tweakers.net claims these roadmaps come from a Dell presentation earlier this year, so should be pretty much up to date. The roadmaps are rather interesting, showing the scheduled introduction dates and product lifespans of several processor ranges, some of which we haven't heard of before.

PC gamers and enthusiasts will probably be most interested in the more powerful Intel mobile processors which make up the H / G Series across the top of the client mobile CPU roadmap. Here we can see that the Coffee Lake H Refresh has indeed just arrived (Q2 2019 launch), earlier this week in fact. 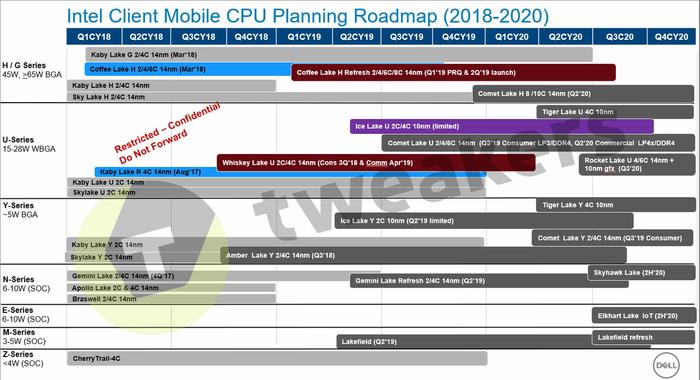 It looks like Intel's next major set of updates for powerful laptops will be with the Comet Lake H series offering up to 8 and 10-core processors. However some might be disappointed to see these are again on 14nm.

In the world of Intel mobile CPUs it will be Ice Lake U in 2C and 4C variants which will be 10nm pioneers. These lower power CPUs, destined for higher-end thin and light, and ultraportable, laptops are due shortly, within weeks to months according to the roadmap. However, production will be "limited" in nature.

Please note that this roadmap, as presented by Dell, is for commercial CPUs, which as tech analyst Patrick Moorhead notes, "always lag the general purpose SKUs". Thus we should expect some earlier dates for PC enthusiasts and other consumers. 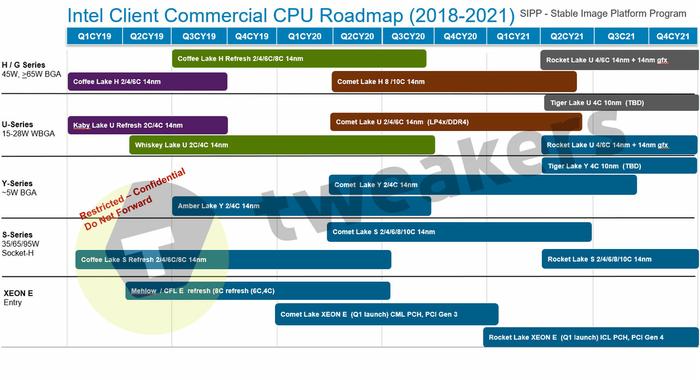 Again, most HEXUS readers, who are largely enthusiasts and PC gamers, will be interested in the upper rows of this leaked roadmap for indications of Intel's plans. The Intel Core H / G series Comet Lake H processors with 8- and 10-cores will arrive in approx Q2 next year, still fabricated on the 14nm process.

10nm parts are rather sparse and offered up with 'TBD' dates in the latter reaches of the roadmap from Q2 2021. Interestingly, the Rocket Lake processors launched in these extremities of the roadmap sound a bit like APUs, with CPU + Gfx specifically mentioned, unlike with earlier generation entrants.

AMD will truly and for the 1st time be a process ahead by then.
Posted by tunrip - Thu 25 Apr 2019 10:56
Wow, 10nm still not really hitting it off for another 2 years. I'm glad they're clearly trying to plan around what's happened and make the best of it, but… still… What an incredible balls up.
Posted by blokeinkent - Thu 25 Apr 2019 10:59
It's really hard to believe at the desktop we're likely to see 7nm offerings from AMD later this year, and only 10nm from Intel not until at least Spring 2021 - utterlly shook!
Posted by sykobee - Thu 25 Apr 2019 11:23
10nm is simply not happening for Intel, at least not above mobile offerings (small dies and lower max clocks).

Intel will surely get hammered in the investor questions in their next earnings.

Intel, up until this leak, has been indicating strongly that we would get 10nm mobile (2C/4C) in Q4 this year, and in desktop/server by the end of 2020.

This is a major change, and if true, surely indicates miscommunication to investors in prior earnings calls - this doesn't just happen.
Posted by ETR316 - Thu 25 Apr 2019 11:59
complain and complain about the process size… get off it already. I have never seen pc “enthusiasts” be so petty. results are what matter. im just curious what happened to “ICE LAKE”