Tom's Hardware has shared a screenshot taken from one of the aforementioned sites, in which you can see the Intel Core i9-9900KF, i7-9700KF, i5-9600KF, i5-9400F listed alongside their SKU reference and tray pricing. You will note that these processors are very similar in name to existing models. However, the big change is with the addition of the 'F' suffix. The generally accepted wisdom is that the 'F' suffix denotes a processor which doesn't have integrated graphics at its disposal. Within the processors listed, the integrated Intel UHD Graphics 630 (GT2) iGPU will be either absent or disabled. 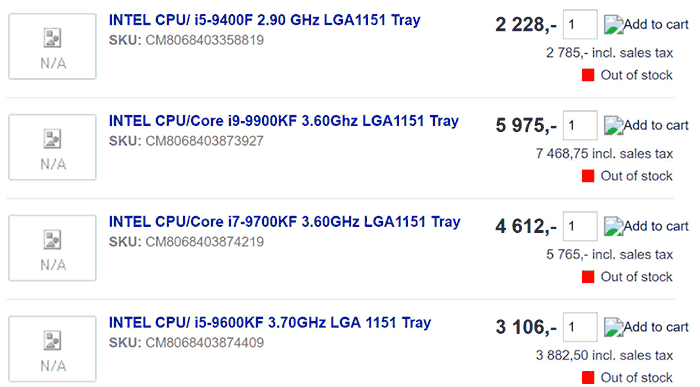 Most consumer Intel processors come packing an iGPU but many use these mid-to-higher end desktop chips with discrete graphics cards. It is possible that some of the above listed 'F' CPUs will be able to run a little faster (or be overclocked more, except for the non 'K' i5-9400F) than their regular counterparts, as they won't be using the iGPU and it won't be contributing to the thermal load. As Tom's Hardware points out, the disabled iGPU can act as dark silicon, "which is unused silicon that absorbs heat from surrounding chip structures". Furthermore, for Intel, these CPUs can be created from those parts that were checked and had iGPU defects - a great way to make money from what would otherwise be waste.

Posted by watercooled - Mon 24 Dec 2018 10:18
Intel iGPUs are power gated if disabled anyway, so this shouldn't make any difference to overclocking etc. If true it's just a way of selling off silicon with broken iGPU, but the prices I've seen are hardly worth it.

People have been making the argument that integrated GPU either increases cost or holds back performance for ages but they're based on wrong assumptions. As the article says, dark silicon helps with thermals if anything, and economies of scale mean there's likely very little potential for saving by removing it, in fact a specialised, low-volume iGPU free die would likely be more expensive overall, hence it makes no sense to produce one.
Posted by lumireleon - Mon 24 Dec 2018 11:27
Question: the total 8 cores have less transistor count than the iGPU combined? if yes why not simply use those resources elsewhere? Question 2: is it true the iGPU being squeezed with the cores is the main reason for the many socket changes that haunts intel every generation compared to AMD?
Posted by Spud1 - Mon 24 Dec 2018 11:43
I guess we'll need to see how the final retail (Rather than RRP) prices shake out on these - if its 10-20% cheaper that can be a significant saving on a £550 CPU.
Posted by watercooled - Mon 24 Dec 2018 17:12

lumireleon
Question: the total 8 cores have less transistor count than the iGPU combined? if yes why not simply use those resources elsewhere? Question 2: is it true the iGPU being squeezed with the cores is the main reason for the many socket changes that haunts intel every generation compared to AMD?

What else would you use the resources for? Adding cores means higher power dissipation, more complex binning, extended ring bus, etc. And as I said earlier if it's a lower volume part, you won't necessarily get the cost savings people seem to assume by stripping out the IGP.

The socket changes that haunt Intel every generation are pretty much just because they want to, there's little in the way of technical reasons they need to happen as often as they do. Don't forget Intel sell those chipsets too! Higher power dissipation of the latest 6 and 8 core parts have more merit than the usual reasons, but AMD are retaining backwards compatibility with AM4 despite higher core counts and a PCIe revision (though it will likely fall back to PCIe 3.0 on existing boards).
Posted by LSG501 - Mon 24 Dec 2018 18:38
Maybe it's me but at those sort of minimal price differences I'd just buy the one with a gpu purely as a ‘fall back’ if a gpu fails.