Earlier in the week there was some controversy over a clause introduced by Intel, inserted into the license governing its CPU microcode updates. In brief, the end-user license agreement, distributed with the security updates, forbade "software benchmark or comparison test results" from being published. However, yesterday afternoon Intel relented and published a new licensing agreement with this clause simply removed.

For reference, I've quoted the controversial part of the agreement below, as by checking the link above it will no longer be found. Paul Alcorn at Tom's Hardware saved this text from the microcode update license file before it was updated.

"Unless expressly permitted under the Agreement, You will not, and will not allow any third party to (i) use, copy, distribute, sell or offer to sell the Software or associated documentation; (iii) use or make the Software available for the use or benefit of third parties; or (iv) use the Software on Your products other than those that include the Intel hardware product(s), platform(s), or software identified in the Software; or (v) publish or provide any Software benchmark or comparison test results."

This past year there have been several industry quaking CPU security vulnerabilities in the news, most notably Spectre and Meltdown. If this news alone wasn't enough, those who are lucky enough to receive security updates because their PC/motherboard is new enough, have had to suffer patches that introduce processing overhead, or reduce modern CPU processing speed advantages.

Most recently, mitigations for the most recently publicised flaw in Intel processors, the L1 Terminal Fault can have significant impact, depending on your workload. Patches for this vulnerability have been shown have little if any impact in most client PC tasks as covered by SYSmark 2014SE but in some data centre workloads Intel admits there can be as much as 31 per cent performance loss when using virtualised environments (SPECvirt_sc2013). 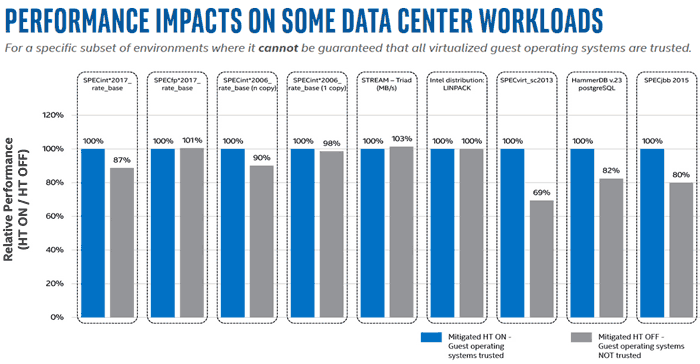 To sum up, it is troubling that Intel decided to insert these restrictions in the licensing agreement - but heartening that it acted quite quickly to remove the restrictions that were complained about by users, and by user groups like the Debian developer community.

Posted by Tabbykatze - Fri 24 Aug 2018 11:43
Hmm…yeah, no Intel. Those microcode updates should be benched to reflect the true performance. I have a feeling they might be stickled by this change.

Edit: ah, i re-read and they doubled back. I wonder if they were trying to introduce and hope no one would bite back.
Posted by darcotech - Fri 24 Aug 2018 12:23
They were probably hoping no one will found that one and later when benchmarks comes, scare them with.
Intel = fishy ….becoming normal…not good
Posted by philehidiot - Fri 24 Aug 2018 13:24
Bad Intel. Now, off you jolly well…..go.

That's disgusting behaviour and they should not need complaints (which are by their nature more damaging because people see you're suppressing the data, people will assume the worst and those for whom this doesn't represent a problem for their specific workloads will still assume the worst) to make them realise this is wrong. This was not a decision made by one person, this will have come down from the top with input from marketing, R&D, legal and likely the executive board.

If they just accepted that their market is one of intelligent and educated people who will judge your products based on objective criteria (as well as punish behaviour like this which treats them like idiots to be manipulated) and came out with this honestly then they would almost certainly have a better reception. Whilst this isn't a massive threat to life, I always like to refer back to Samsung's Note 7 recall. They admitted fault, did the recall, investigated, released the results of the investigation so the world could learn from it and then, even when they could have easily blamed the battery supplier, they took full responsibility as they specced the batteries.

Faults will occur in all manufactured products. Issues will be found. Honesty and integrity will go a lot further than attempts to legally suppress the information a consumer needs to make an objective choice and also a decision on whether to prioritise workload or security. Or decide to perhaps not patch and ensure there is vulnerability mitigation at a different level in the system. There's no point in guaranteeing destroying your business because you lose 30% output if you can take a risk, not patch and secure the system elsewhere. Not allowing this information to be shared means people have to apply the patch and bench for themselves. Which is a PITA when Intel could just do the decent thing.
Posted by peterb - Fri 24 Aug 2018 14:51
Yes, yet another blow to Intel's corporate integrity. (Although as that integrity is pretty small, landing any blow requires a microscope)
Posted by pp05 - Fri 24 Aug 2018 14:59
That is just silly on Intel's part.