According to the information shared, all the Amber Lake parts thus far are 2C/4T processors with 5W TDPs. They appear to differ only by base clock and turbo clocks. However, that's all the info we have so there could be significant cache differences to be revealed, for example.

As Liliputing highlights in its report, the above processors look very similar to the Intel 7th-gen Core Y chips based on Kaby Lake architecture; the Core m3-7Y30, Core i5-7Y54, and the Core i7-7Y75. The new generation ships are all buffed by modest 100-200MHz base clocks and 600-800MHz turbo clocks. Amber Lake parts are expected to be deployed in slim, fanless designs, similar to their predecessors.

As part of its 50th anniversary, Intel has flown 2,018 Intel Shooting Star drones over its Folsom, California, facility. That number of drones flying in concert constitutes a new Guinness World Record. The celebrations will continue until the eve of 22nd July, weather permitting, with shows made up of 500 Intel Shooting Star drones over Intel's corporate headquarters, the Robert Noyce Building, in Santa Clara, California. 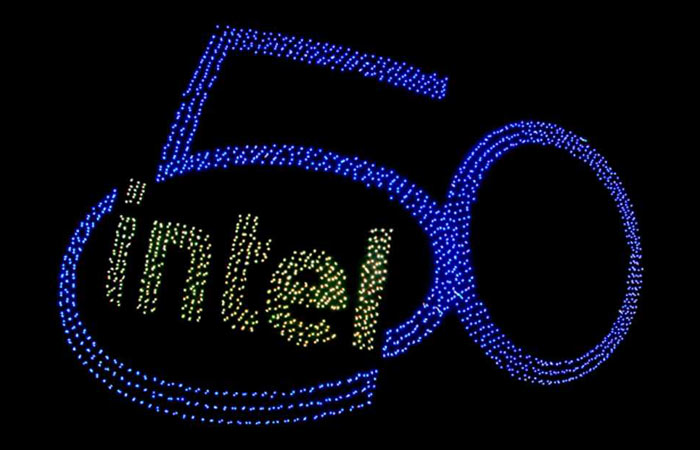 Intel's Intel Shooting Star drones are designed simply for entertainment purposes and their positions and bright colour LED lights can be programmed, and co-ordinated in a fleet, by a single operator.

yeeeeman
Given the 5W TDP, I wouldn't say that a 200Mhz bump on base frequency and a 800Mhz bump in turbo frequency is a modest one. Qualcomm can only dream of that. Also, they need to push low power stuff more, adding LTE and 5G eventually, so that Qualcomm will be just a failure on its PC adventure.

Hmmm sensor for massive Intel fanboy tripped.
Posted by yeeeeman - Sat 21 Jul 2018 11:36
Wrong, I actually support and like AMD more compared to Intel. But to give any sort of frequency bump on a chip that is at this low TDP, it is something worth mentioning.
Still, nobody guarantees that this will not throttle like a potato.
Posted by Noli - Sat 21 Jul 2018 13:54
So can someone help… If I was interested in a MS Surface and couldn't quite afford one so went for a 2-in-1 like these, I'd miss out on the detachable keyboard and funky kick stand. However, the other big thing is the pen. Will the Surface pen work with the touchscreen on this? And if so, will it be just as good as with the Surface? Or is part of the Surface writing quality based on the screen as well as the pen?