German IT distributor Bluechip hosted a webminar for its partners in which it shared a roadmap for the rest of 2018. Hoping to give its partners a heads-up on what to expect throughout the rest of the year, the 30 minute webinar inadvertently went public via YouTube, where VideoCardz managed to take some screenshots before the video was deleted. Interestingly the presentation included mentions and a sprinkling of details about AMD and Intel products that previously only existed in the shadows.

On the AMD side of the exposé, we see the following key reveals within the Bluechip slides; 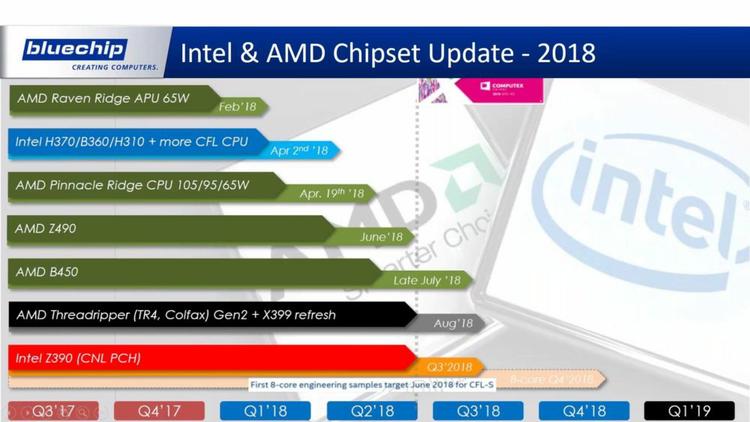 Looking for Intel roadmap nuggets, we see confirmed a number of tantalising rumours;

I’ve just reproduced one overview slide, above, (and it’s a bit hard to read the Intel octa-core info thanks to the white text on light grey background) but there are more slides available at the source.

10GbE still seems stupidly expensive for something that is no faster than the USB ports that are now commonplace. We know AMD have the IP as it is in their ARM chips.
Posted by 3dcandy - Fri 04 May 2018 10:23
Z490 seems to be a lot better…

That would make more sense if the chipset to CPU connection was PCIe 4.0, which in a closed CPU to chipset setting they could push for.
Posted by deadstoned - Fri 04 May 2018 10:57
At last a date set for B450 motherboards. I'm keen to pick up an ITX one with HDMI 2.0 for a new HTPC build.