Google has refined and developed its 9-qubit linear array technology to create Bristlecone, a 72 qubit quantum processor. It presented Bristlecone at the annual American Physical Society meeting in Los Angeles. The new processor takes the attractive low error rate qualities of its predecessor, and it is hoped that using the new processor Google will be able to demonstrate quantum supremacy.

Bristlecone is Google’s newest quantum processor (left).
On the right is a cartoon of the device: each “X” represents a qubit, with nearest neighbor connectivity.

Bristlecone is a gate-based superconducting processor system. It was designed to preserve the underlying physics of Google's previous 9-qubit linear array technology with low error rates for readout (1 per cent), single-qubit gates (0.1 per cent) and two-qubit gates (0.6 per cent). As you can see above the processor uses a square array of 92 qubits (9 x 8).

2D conceptual chart showing the relationship between error rate and number of qubits.
The intended research direction of the Quantum AI Lab is shown in red, where we hope to access
near-term applications on the road to building an error corrected quantum computer. 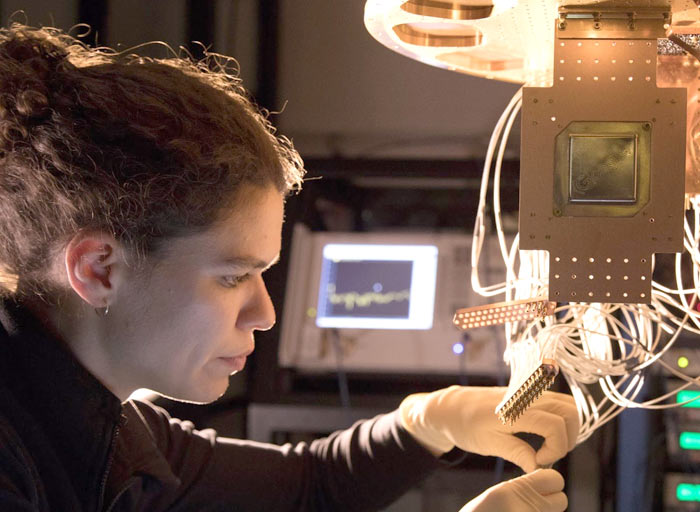 We are warned that there are still plenty of hurdles between Google and its supreme goal. "Operating a device such as Bristlecone at low system error requires harmony between a full stack of technology ranging from software and control electronics to the processor itself," says the Google Research Blog. Several iterations of Bristlecone and supporting hardware and software are expected to be needed along the road but Google's researchers are "cautiously optimistic," they will succeed.

Intel is also at the American Physical Society meeting in LA. The chipmaker has seven sessions booked at the event, all with a focus on Quantum computing. Intel boss Brian Krzanich linked to a news fact sheet (PDF) via his Twitter account so you can read more about what will be discussed by Intel at APS over the next few days.

It all depends on how you look at it.
Posted by Myss_tree - Wed 07 Mar 2018 07:27
Can i be the first to mention the word “Crysis”.
Actually a law is needed similar to Godwins Law that once Crysis is mentioned ….
Posted by Dragonstongue - Mon 12 Mar 2018 06:05
HP, IBM, Intel, Google, AMD to name a few are working/are doing quantum and pure optical based chips (likely be many years before we see them, especially at a more consumer level pricing) (not to mention military 99% of the time has stuff 10+ years ahead of what we as the consumer see)

this is why we can't have nice things O.o