Intel is claiming an industry first as it prepares to release its Nervana Neural Network Processor (NNP), before the year is out. The chipmaker has worked closely with Facebook to design this new generation of AI hardware. Intel’s Nervana NNP will work to accelerate AI calculations and enable new classes of AI applications for smarter, more insightful computers. It is expected that NNPs will have a big impact on health care, social media, automotive, and weather prediction. 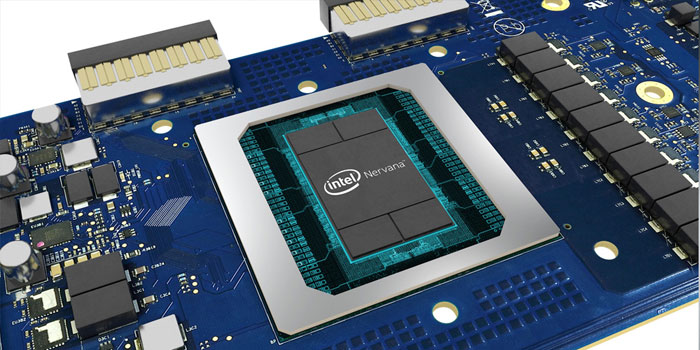 In a blog post penned by CEO Brian Krzanich, we are told that the NNP released later this year will be the first of many. Furthermore the release of this first Nervana processor is claimed to put Intel on track to “exceed the goal we set last year of achieving 100 times greater AI performance by 2020”. Unfortunately little in the way of technical details were shared by Krzanich yesterday. However, he recapped other important Intel chipmaking innovations over recent weeks; the news of the first self-learning neuromorphic test chip, and the 17-qubit superconducting test chip delivered to QuTech last week.

HEXUS covered the news about Loihi, the self-learning chip from Intel, back in September. This neuromorphic computer processor blends semiconductor science, physics and biology to deliver extreme energy efficiency and the capability to make inferences, growing smarter over time without ‘traditional’ computer AI training. Loihi is pictured below, left.

Last week Intel delivered a 17-qubit superconducting test chip, pictured above right, to its Netherlands-based research partners at QuTech. It is hoped that this hardware will help realise the potential of quantum computers to plough through exponentially larger problems, way beyond those solvable by classical computers. By the end of this year Intel expects to deliver a 49-qubit chip to leapfrog its already impressive advances.

from the album “In Utero”

Be interesting to see it applied to organisation in the health care field.
Posted by ik9000 - Fri 20 Oct 2017 14:17
not a derail. I don't want any AI linked to facebook and “social profiling” aka personal datamining and “Smart” exploitation

Hence go away, go away, get out of my head. I'm not sure it is that song however - I'll have a listen tonight.