Gigabyte launched a trio of Aorus AiO liquid coolers last September. With Intel releasing its powerful overclockable Comet Lake desktop CPUs in May, like the Core i9-10900K and Core i5-10600K, it must have thought it best verify the product range's capabilities to keep these CPUs cool under duress. In a news release Gigabyte says it has verified the whole Aorus LCS cooler range can support Intel Core i9-10900K CPUs running at all cores 5.2GHz in intensive workloads over sustained periods.

Gigabyte Channel Solutions Product Development Director, Jackson Hsu, explained why the Aorus Liquid Cooler Series were verified in this way. "Following the verification of AMD Ryzen Threadripper 3990X on 360 models, this time the whole series pass the heavy loading burning test and overclocking with Intel Core i9 10900K CPUs at all cores 5.2GHz, has further testified the quality of Aorus Liquid Cooler and the efforts of Gigabyte engineers," said Hsu.

As a reminder the Intel Core i9 10900K processor boasts 10 cores and 20 treads. While it is listed with a TDP of 95W, under strain it was observed pulling over 320W to sustain its 5.2GHz all-core boost. To tame such powerful CPUs, Gigabyte says that its LCS designs featuring Asetek Gen6 pumps, Aorus special designed dual ball bearing fans, copper baseplate and aluminium finned heatsinks - all play a part. A particular nicety of the Aorus design is the 60 x 60mm circular LCD display on the cooling block with configurable display for things like CPU frequency, temperature, and fan speed. 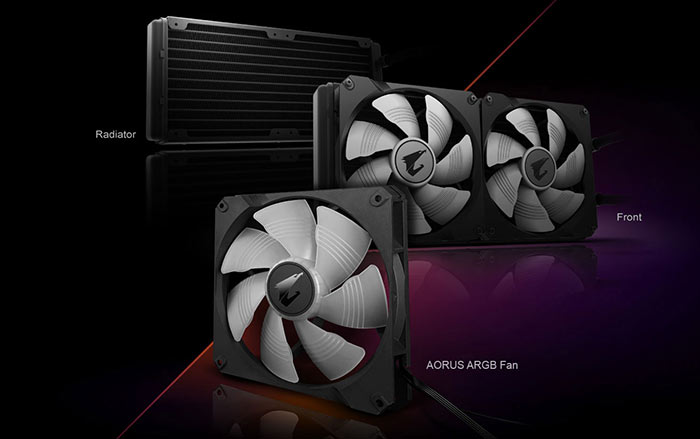 The test chosen by Gigayte was to run a "long-period burning test of Prime95 benchmark with super high loading". The full range of Aorus AiO LCS coolers were 'validated' in this way, with the Intel Core i9-10900K CPUs run at full throttle, all-core 5.2GHz, in all cases. Gigabyte told Tom's Hardware that it tested a significant number of i9-10900K processors, and it didn't use specially binned CPUs for these tests. During the Prime95 runs the CPU temperatures ranged from 85°C to 96°C with a Tjunction max of 115°C.

Meh - Each of my tyres have more cores and more treads than that!! :p

HEXUS
A particular nicety of the Aorus design is the 60 x 60mm circular LCD display on the cooling block with configurable display for things like CPU frequency, temperature, and fan speed.

Would have been better with a square display, I think. Better suited to custom graphics and display modes.

I wonder if I could do a custom 360 loop for about the same money…
Posted by Stu C - Thu 02 Jul 2020 13:17
I appreciate the LCD adds to the cost, but I keep coming back to the Arctic Liquid Freezer II at < £100 and wonder about both performance and cosy difference.