High-performance gaming peripherals and enthusiast components specialist Corsair has quite a few new wares to show off at CES 2020. The firm is very well known for its AiO coolers and the new iCUE RGB PRO XT Liquid CPU Cooler is the latest in this family. More of a surprise is its A500 Dual Fan CPU Cooler, which is claimed to cool CPUs up to 250W TDP.

The Corsair iCUE software allows users to customise and control the RGB lighting on the pump (16 addressable RGB LEDs) and syncs with other comparable components and peripherals. As Corsair users will already know, iCUE also controls and monitors fan and pump speeds, as well as other peripheral parameters.

Corsair's A500 Dual Fan CPU Cooler (£90) is a rather beefy design with four direct contact heat pipes and twin ML120 fans in push-pull configuration. The PWM controlled fans operate at between 400 and 2,400RPM.

One of the key attractions of the A500's design is its "intuitive" slide-and-lock fan mount system. It makes use of a variable mounting height assembly for accommodating both standard and taller RAM modules. Meanwhile the 'HoldFast Retention System' copes ably with the multitude of sockets out there - almost all modern AMD and Intel CPUs (AMD AM4, AM3, FM2. Intel LGA115x, LGA20xx). 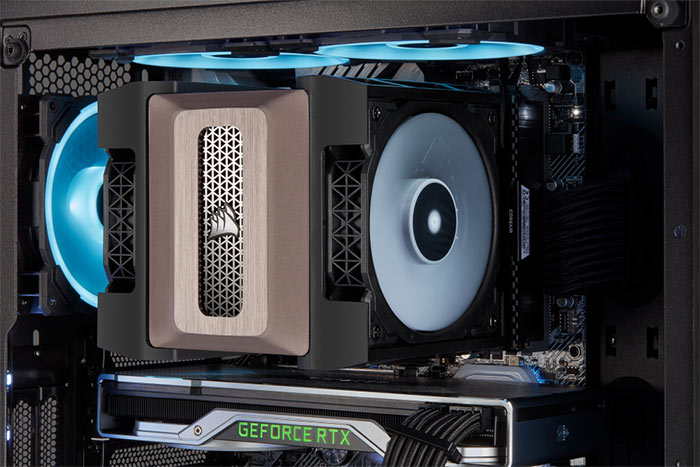 Corsair XTM50 Thermal Paste is pre-applied but there is an additional tube supplied in the box.

LeSWiS
Noctua already has serious competitors since long ago. One more won't make any difference to their pricing. Just more choice I guess.

There have been a few that have come close, but none I am aware of that have done it quite as well (let alone better than) Noctua's NH-D series coolers. There's always at least one aspect where the competition has fallen short, be it performance, price, noise, or something else.

This coming down at £90 when the topend air coolers generally sell for 70-80 is a bit much, and that 2400rpm rating on the fans makes me think this isn't going to compete with the establishment at a given noise level.

The Noctua and Be Quiet! flagships end up broadly in line from what I've seen; I don't think Noctua has any lead to speak of these days.
Posted by Ttaskmaster - Tue 07 Jan 2020 16:40

edmundhonda
and that 2400rpm rating on the fans makes me think this isn't going to compete with the establishment at a given noise level.

RPM has nothing to do with noise levels, though. It's about how much noise the airflow makes going through your rads and grilles and meshes, most of which is down to how the fan blades direct the air. The wider the ‘cone’ the more likely you are to get turbulence and thus more noise.

Ever since doing a build with nine ML120s in a Phanteks case, using low FPI rads, I've been sold on these fans.