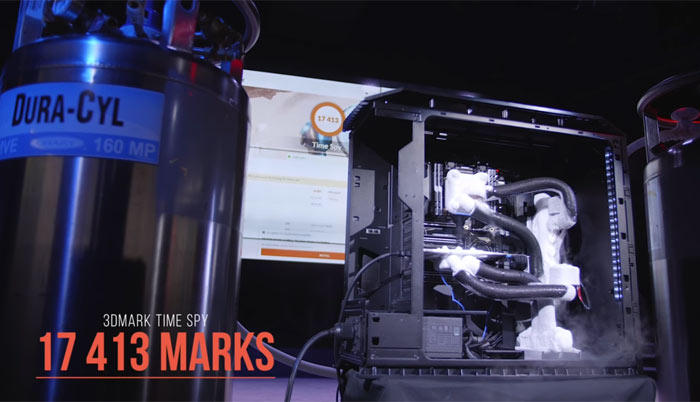 Veteran overclocker KINGPIN and overclocker TIN worked together on this extreme cooling project at EVGA's lab. Roboclocker is the result of ideas that have been in gestation for nearly seven years. KINGPIN says he was inspired to finally put theory into hardware after approx 17 years of overclocking feats and competitions. He sat down with TIN and drafted the plans to create the Roboclocker and initially the duo created a manually controlled device to take the physical effort out of LN2 overclocking. Interestingly, TIN's first working controller was based around a Mortal Kombat arcade control panel.

Once the mechanical controller worked it was time to take the man out of the equation and let the computer decide how to control the various aspects of LN2 overclocking. The result is that the automated LN2 cooling system, Roboclocker, thanks to the way it works and its 'closed loop' nature, "uses a lot less LN2".

Summing up the promise of Roboclocker, KINGPIN said "The old way just doesn't beat it. Everything evolves, and this is a great evolution in extreme overclocking." As mentioned in the intro, this machine has already broken five single card VGA records and it pretty surely will be gaining further merits in coming weeks and months. The EVGA team hope to develop Roboclocker further so it is almost plug-n-play.

Posted by Wrinkly - Mon 04 Jun 2018 14:49
I know a few EVGA cards were catching fire, but this still seems a little extreme.
Posted by dfour - Mon 04 Jun 2018 16:33
Not as extreme as the price will be :D
Posted by EvilCycle - Mon 04 Jun 2018 16:35
Let's hope this tinkering produces something worthwhile for the masses, not LN2, but some of the ideas of getting this to work could filter into something else? Anyway, to digress a little (sorry)… I have always wondered if there could be some kind of self contained gas chamber cooling system (liquid flows to CPU, evaporates into gas and also expels this heated gas into a chamber or even multiple chambers, where it then gets re-cooled and pumped back to the CPU as a liquid) that could be low maintenance like an AIO cooler but one that wouldn't also be a potential explosive weapon!
Posted by .havoc - Mon 04 Jun 2018 16:59

EvilCycle
I have always wondered if there could be some kind of self contained gas chamber cooling system (liquid flows to CPU, evaporates into gas and also expels this heated gas into a chamber or even multiple chambers, where it then gets re-cooled and pumped back to the CPU as a liquid) that could be low maintenance like an AIO cooler but one that wouldn't also be a potential explosive weapon!

I believe you are referring to something called phase change cooling - there are platforms available to buy from LD Cooling for a couple of thousand Euro. Would post a link but think it may break forums rules - but its easy enough to google if you have a couple of grand sitting around to buy one!
Posted by watercooled - Mon 04 Jun 2018 20:02
So outside of marketing nonsense, how exactly is it supposed to work? Liquid nitrogen cooling as it's generally used in overclocking just works through evaporation - the liquid boils and the phase change takes heat with it. If you were to seal it in somewhere you prevent evaporation so just end up with some room temperature nitrogen sitting there (though that's really not happening here - N2 cannot be a liquid at room temperature and pressures for its supercritical phase at room temperature are immense). It's not some sort of physics-defying substance which just magically destroys heat!

So, it's basically just piping the nitrogen to the blocks rather than having to pour it in manually (probably, given the huge dewars either side of it) in which case it's not a closed loop?