...image quality and performance improvement are both reasonable when set to either Ultra Quality or Quality modes.

The guts of the technology revolve around a two-pass post-processing spatial algorithm which works by extracting more detail from a low-resolution input that's then rendered at a higher resolution. Like Nvidia, the aim is to produce native-like image quality without having to render all of the usually required pixels.

Available on seven games at the outset with promise of more in the near future, we found that image quality and performance improvement are both reasonable when set to either Ultra Quality or Quality modes. Anything lower, however, and IQ suffers more than we'd care to accept.

Let's be clear. FSR isn't as good as DLSS - it presently has neither the game scope or the quality. That's a normal position as it's a brand-new technology set against Nvidia's two-year-plus head start. The burning question is whether AMD can catch up on IQ and coverage.

FSR's success will only be known in six months' time. For now, going from a standing start, the technology's broader addressable market - across PC and console - is key into driving widespread adoption. Let's see how AMD does. 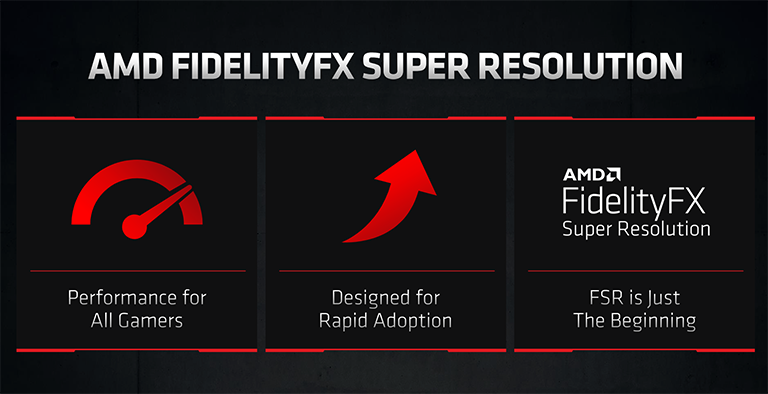 hexus
FSR is not a strictly one-fits-all approach. The algorithm works in the same way across all supported titles but developers can choose to optimise it for their particular games engines - tweaking the scale factor, for example, or applying more or less sharpening as they see fit. One game's FSR implementation may well be better than another's, depending upon developer expertise.

Though it may be obvious to many, FSR needs to be implemented on a game-by-game basis.

I don't get why it needs to be implemented on a game-by-game basis. If all the devs are doing is tweaking the scale factor and sharpening amount then why can't I do that as an end-user instead?
Posted by Tarinder - Tue 22 Jun 2021 14:30
They will need to download the code from GPU Open, do their own testing and implementation, and then release to public. Some may do it, many will not bother.

Nvidia says a smart dev can get DLSS running in under a weekend… but we still see loads of games without it.

The promise appears to be greater on the console side.
Posted by CAT-THE-FIFTH - Tue 22 Jun 2021 14:38
20% extra on a GTX1060 isn't to be sniffed at! If this was on my GTX1080,in Cyberpunk 2077,it would mean I would consistently get 30+ FPS at qHD at decent quality settings. ATM,I appear to hover around 30FPS,ie,sometimes in the late 20 FPS range and other times in the early 30FPS range.
Posted by Nifl - Tue 22 Jun 2021 14:44
The tech requires access to different stages of the rendering. So it will be easier to implement for some games and very difficult for other games. Can't just slap it on via a direct3d hook. Or this would already be in ReShade or SpecialK.
Maybe this could have saved the disastrous Cyberpunk 2077 PS4 launch :D
Posted by CAT-THE-FIFTH - Tue 22 Jun 2021 14:51
https://www.youtube.com/watch?v=yFZAo6xItOI
https://www.youtube.com/watch?v=yFZAo6xItOI

They showed that FSR is better than DLSS1.0 and better than in-game upscaling with additional Adobe sharpening tools used. When comparing the highest quality modes,FSR is actually quite close to DLSS2.0 images,but the latter is better at lower resolutions.

The main advantage it seems for FSR,is that it can be used on Pascal GPUs,which still make up a lot of the Steam install base of GPUs.