Apple has released its latest set of financials. This time they cover the firm’s Q1 2018 accounting period, which ended on 30th December 2017. Interestingly, the reporting period includes the launch of the pricy iPhone X and the Xmas festivities. Headline figures include an all time record quarterly revenue of $88.3 billion (up 13 per cent year on year), and record EPS of $3.89, with the company making $20 billion in profit.

Apple achieved the above record financials despite selling fewer iPhones, iPads and Macs than it had been expected to do. Looking at the performance of the iPhone range, Apple’s shipments in Q1 2018 were down compared to Q1 2017 - 77.3 million compared to 78.3 million in the same period a year ago. 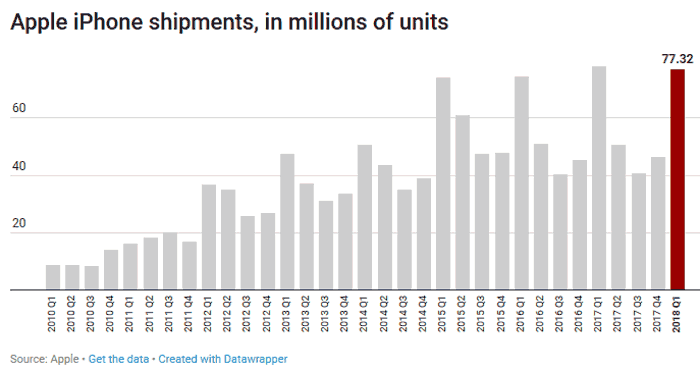 Tim Cook, Apple’s CEO, managed to find a positive spin or two to apply to the results, saying “iPhone X surpassed our expectations and has been our top-selling iPhone every week since it shipped in November”. Replying to comments that the iPhoneX was a niche device, he told CNBC reporters that “You don’t become the top selling smartphone in the world by being a niche product”. Apple’s pricy iPhone X also delivered the benefit of pushing Apple’s average iPhone selling price to $796, up almost $100 from the same time a year ago, reports ReCode. 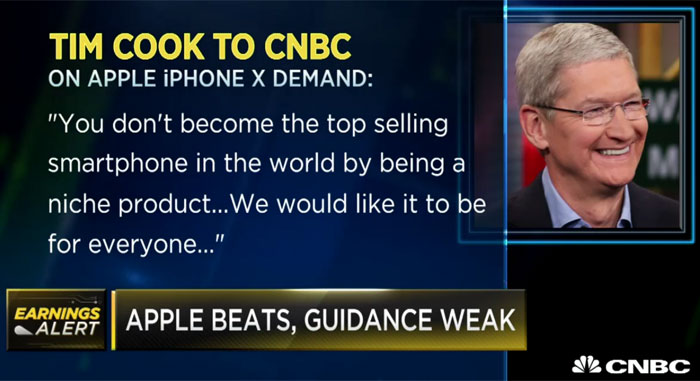 It seems like the wearables revolution has been reluctant to get out of bed but in Apple’s latest results wearables revenue grew 70 per cent year on year. Wearables, which include the Apple Watch and AirPods, was “the second biggest revenue contributor” for Apple, reported CNBC. Wearables are covered by the ‘Other Products’ summary figures, so the CNBC statement doesn’t seem quite right to me.

For Q2 2018, Apple is projecting revenue of $60 billion compared to $51.5 billion a year previously. It intends to launch its HomePod smart speaker during this fiscal quarter.

Lord Midas;3918194
Sell less things, but they are MUCH MORE EXPENSIVE. Surely that's the only way they made money?

They are selling less phones,as phones are stagnating more and more. However,this is due to them not wanting to spend more money on putting useful features into the phone,hence,they jack the price up on a cheaply made device. It shows you how cheap the components are in modern “premium” phones.

If they actually spent more money on R and D,more money on the actual BOM for the phones,and pricing them more resonably they would sell more phones,but the fanbois will just keep spending more and more on the cheaply made devices and this is a dig at all of the “premium” phone makers,not just Apple.

I said many years ago,the Chinese companies who sell at a lower margin would start taking business away,since due to the stagnation,it was easier for them to get close enough to offer compelling devices. As time progresses,they will start taking more and more of the “premium” market as they will put more features in for a similar price. This is just the start. Apple,etc need to get off their lazy arses,spend some more money and actually innovate. Look at what happened to companies like Kodak,and Blackberry.
Posted by peterb - Fri 02 Feb 2018 16:15
Smartphones are pretty much a mature product - Im not sure where there is much room for innovation. If anything, the revenue stream is more likely to come from applications and services - but even that is limited because raising the cost of either will risk driving sales to the competion - not that there is much - really just Google and Apple now.
Posted by CAT-THE-FIFTH - Fri 02 Feb 2018 16:23

peterb
Smartphones are pretty much a mature product - Im not sure where there is much room for innovation. If anything, the revenue stream is more likely to come from applications and services - but even that is limited because raising the cost of either will risk driving sales to the competion - not that there is much - really just Google and Apple now.

There is plenty of room for improvement,and the tech is there,its just bean counters are more worried about sitting on piles of cash than using it.

As I said years ago,Chinese companies will eat away at the lower end more and more and its shown in the actual figures now,and as they start building up their own names,they will start attacking higher end markets and since they wlll probably accept lower margins,probably will start to out innovate the incumbants.

Even when it comes to Chinese SOC development,it was thought of as a joke,but some of them are starting to become serious competition now,especially with the Chinese government trying to push more home grown developments. The thing is companies like Apple and Samsung need to look at history. Kodak,Blackberry and Nokia looked untouchable. They were incredibly trusted by their customers and nobody ever thought anyone could take away business from them. But we have seen this in the technology markets,allegiances customers have are much more fickle than we think.

In fact Apple should know that - look at the 1980s PC market,Apple were running high,until they came crashing to the ground. They really need to stop these bean counter inspired releases and start spending their money and pushing truely revolutionary improvements,otherwise their competitors will catch up and exceed them as they want their sales.

In some ways whatever people thought of Steve Jobs,he was not only a persuasive salesmen,but he was willing to take risks when compared to the competition.
Posted by lodore - Sat 03 Feb 2018 20:20
The only real issue with portable devices is the batteries. I have heard about break through battery technology giving smart watches 6 months battery life rather than hours but it hasn't come to production yet.
I still wonder if the battery companies and technology companies are boycotting it simply because they will make less money due to selling less units. the main reason I went for the pixel 2 over anyother android phone was due to updates for 3 years and no bloatware. if project treble really does speedup android updates and means companies support phones for longer I may go for a different option next time round. I am happy for pay more for something if it has a benefit but nothing seems to be designed to last anymore. I am intending to purchase business grade networking equipment in the hope it is supported for longer and has fast updates.