For a brief refresher, DirectStorage is an API designed to speed up game loading times from super-fast modern storage devices like NVMe SSDs. It first surfaced as part of the Xbox Series X/S Velocity Architecture and is claimed to aid the construction of "new immersive gaming experiences with vastly reduced load times". With the arrival of the first DirectStorage Developer Preview, we thankfully get a clearer look at the technology for Windows users. 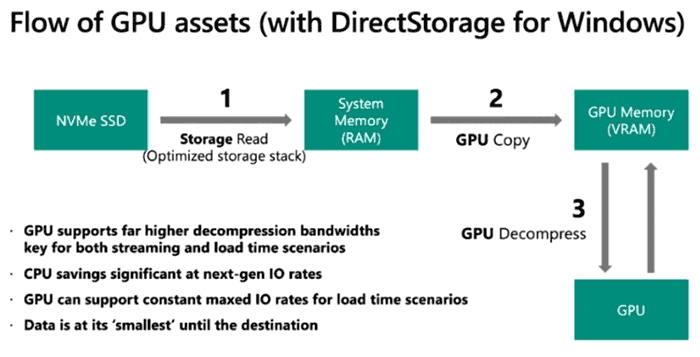 In the new dev blog post, DirectStorage features are summed up in three bullet points:

It is further explained that "because Windows 11 was built with DirectStorage in mind, games running on Windows 11 benefit further from new storage stack optimizations". In other words, games built against the DirectStorage SDK will work on both Windows 10 and 11, but the latter will benefit from storage stack optimizations. Developers don't have to do any conditional jiggery-pokery, once DirectStorage is implemented its benefits will be "automatically applied and scaled appropriately for gamers".

Windows 11 and a modern fast storage device were not the only originally stated requirements to enjoy the benefits of DirectStorage. Systems must also include a DirectX 12 Ultimate supporting GPU, like an AMD Radeon RX 6000 series, or Nvidia GeForce RTX20 or RTX30 series GPU.

Last but not least, users of older, slower storage tech on their Windows machines are assured that "DirectStorage enabled games will still run as well as they always have," on that hardware.

Windows Insiders are already playing with early releases of Windows 11, but DirectStorage isn't yet available in these easy to obtain test releases.

Corky34
I guess we should be happy even though we now know DirectStorage on WII was an arbitrary decision.

But that's what every software firm does to get you to do to buy the new shiny. If they back port everything you'd never upgrade… I suspect they'll be other features that are Windows 11 exclusive soon enough. (To be fair to Microsoft they have push out plenty of Windows 10 feature packs).