Microsoft revealed the Xbox Velocity Architecture last July, showing off some background work and ideas that had gone into the Xbox Series X/S, to bring true next gen gaming to the masses. Some of the key aspects of this architecture are to do with storage – getting the stored data to the CPU and GPU as fast as possible, with minimum latency and sustained performance so game designers feel less restricted, especially in imagining open world games.

The DirectStorage API was highlighted as one of the four pillars of the Xbox Velocity Architecture, and it is on the way to Windows 10 PCs. At the recent Game Stack Live 2021 event Microsoft confirmed some of the specs that PCs will need to boast in order to enjoy this new games enhancing API.

It was widely expected that PCIe 4.0 storage would be a minimum bar, but Microsoft has now confirmed that the API will be compatible with PCIe 3.0 NVMe SSDs. The older and slower SATA drives are out of the running, even SSDs, but that isn't surprising.

On the PC, DirectStorage will implement a more efficient link between the storage subsystem and GPU, which is why there is also a GPU minimum spec – your graphics card / iGPU must support DirectX 12. This GPU proviso seems even less strenuous than the storage one, as graphics cards starting from the RTX 600 era are thus going to be up to spec.

For a bit of background on how DirectStorage for Windows PCs will work, the tech is claimed to be the next big step for Windows gamers to eliminate load screens / transitions. Above you will find a talk about the technology and understand the background of why it is seen as the key to "vastly reduced load times and virtual worlds that are more expansive and detailed than ever". 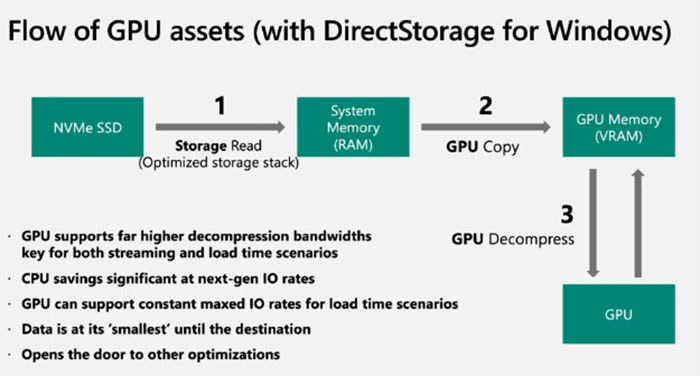 A developer preview of this tech for PCs will be available this summer and Microsoft encourages devs to get on board and start re-architecting PC games engines for next-gen IO patterns now.

Posted by ronray - Thu 22 Apr 2021 12:06
This is good timing for me because I managed to bag a bargain basement 2TB PCIe 3.0 NVMe which is due to be delivered today. I was wondering if it would support DirectStorage so it's great news.