4A Games has announced that it will be delivering the Metro Exodus PC Enhanced Edition "later this Spring". This is an update to the game so significant that it wasn't able to roll it out as a patch but worry-not, it will be a free upgrade to existing game owners.

So, what is enhanced? The update takes advantage of 4A's new Fully Ray Traced Lighting Pipeline which can deliver the "ultimate ray traced experience" on both modern AMD and Nvidia graphics cards. Actually a modern hardware ray tracing graphics card is a minimum requirement to play the Enhanced Edition on PC.

This Metro Exodus PC Enhanced Edition is going to be a free update to all owners of the existing Metro Exodus on PC on the Epic Games Store, Steam, and GoG.

Consoles and other platforms 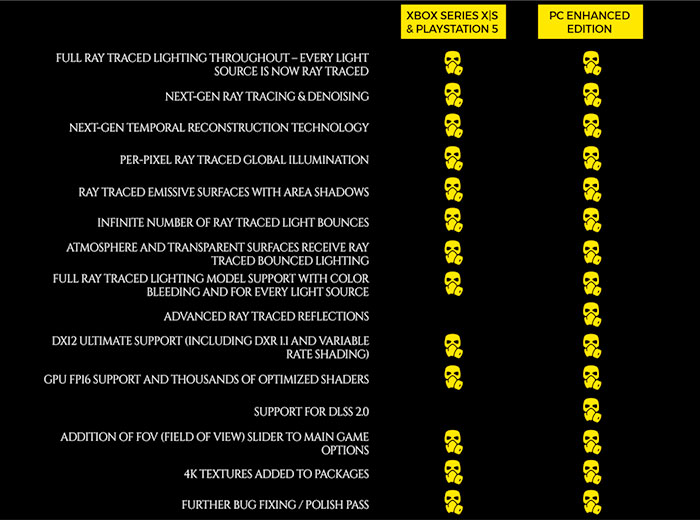 Console users are also going to benefit from controller latency improvements on Xbox, and support for the haptic features of the PlayStation 5 Dual Sense controller. Further polish and quality of life improvements are included in the update too. As with the PC version, these updates will be free via Xbox and PlayStation stores.

Apple Mac users will get Metro Exodus in March, and Linux a little later in the year.

Improved version will include niceties such as raytracing and faster loading times.

Really enjoyed Exodus, great game and it looked really good back when I first played it..so the extra RT bits will be a nice addition.

Worth clarifying (since the article itself and it's title does not make this clear) that Exodus had Ray Tracing at the start - so this is enhanced RT support adding more flair to it, which will be even better - but it had some nice ray traced effects in the first “edition” too.
Posted by CAT-THE-FIFTH - Tue 16 Feb 2021 13:22

So it does seem RT reflections might be a weakness of the current AMD GPUs,as it was hinted at by some tests compared to Ampere.

Because it does AMD RT performance seems OK outside of that,as in the latest WoW expansion AMD can actually beat Nvidia with RT on!!
Posted by Gentle Viking - Tue 16 Feb 2021 14:32
I assume PC enhanced version = if you have RTX card.