Valve's Steam Store has a new promotional event which is on right now. The Steam Game Festival Autumn Edition opened with some interesting attractions, but most notably the uploading of "hundreds of new game demos," as well as in-depth developer interviews, and developer livestreams.

Computer game demos are a tried and trusted method of gaining footfall and Steam isn't best known for them. I've noticed time limited demos from Ubisoft grow in prominence in recent months and maybe some little bird told Valve it is a worthwhile strategy. Another pressure point on the Steam Store business is likely to have been / will be the growth of streaming services which in effect provide month-by-month extendable AAA games demos for a modest fee.

The official landing page for the Steam Game Festival Autumn Edition is here. Visiting this portal shows a current live developer play session near the top of the content. Beneath that there is an event schedule, followed by a featured demos section, interviews section, then trending games section. 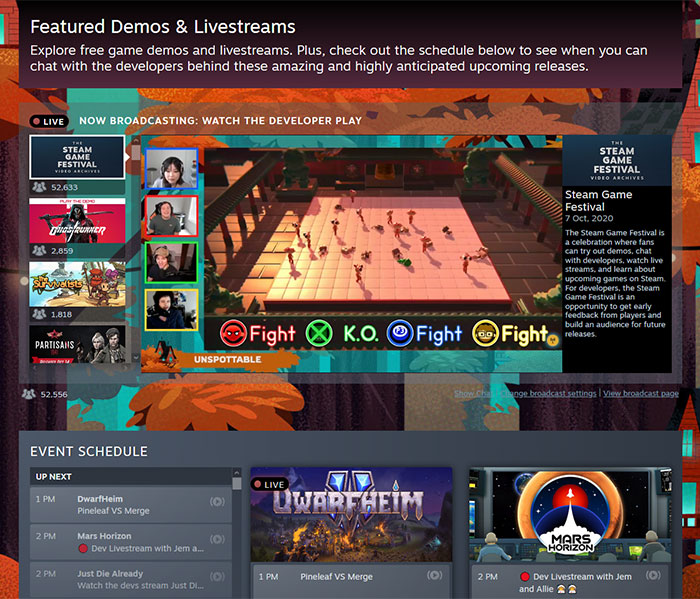 Diving into the demos section you can sort by new demos, popular demos, and demos of upcoming releases. Some of these time-limited games demos appear to tie in with the developer / interviews sections, which makes sense. Valve says that "some of this season's most anticipated games," will be featured in the Game Festival content. On upcoming releases you are reminded to add them to your favourites list so that you will get notifications when the game is actually released.

This isn't a 'sale event' but the Steam Store has a special offers section and various promotions in perpetuity nowadays. At the time of writing I am looking at a 'Midweek Madness' sale on titles like Warhammer 40,000, the Dead Space franchise, and Battlefield games. Again, if there is anything of particular interest on Steam that you don't already own, using that wish-list system is useful as you also get price drop notifications.