We reported that Microsoft Windows 10 Fall Creators Update had started to rollout earlier this week. However, amongst the new gaming technologies listed one interesting new development wasn’t touched upon. Alongside the OS update, Microsoft has implemented a new anti-cheat system, dubbed TruePlay.

“A game enrolled in TruePlay will run in a protected process, which mitigates a class of common attacks,” explains Microsoft. “Additionally, a Windows service will monitor gaming sessions for behaviours and manipulations that are common in cheating scenarios.”

Microsoft adds that TruePlay is not a ‘block on launch’ experience so users that haven’t opted into TruePlay can still launch protected games. It is up to developers to decide which gaming features are allowed out of the TruePlay cheat protection system within their games/apps. 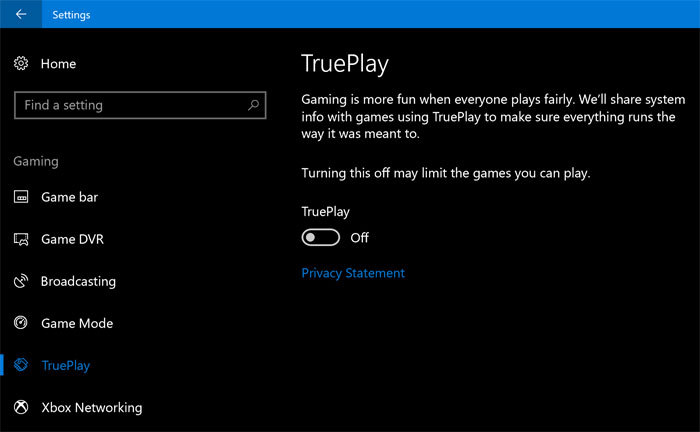 If interested, you can read much more about TruePlay implementation and functions on the dedicated MSDN site, with examples showing the usage of the API and so on.

Posted by Tabbykatze - Fri 20 Oct 2017 12:25
Baking it into the OS is a great idea as long as it doesn't negatively impact the system. It's a shame it's UWP only and not for all Apps. If Trueplay was available for all you may actually be able to play Tom Clancys Division without cheaters!
Posted by shaithis - Fri 20 Oct 2017 12:29
Hopefully it fixes more issues than it creates!

cheesemp
If its UWP its probably dead in the water. Has anyone bought a UWP game? I don't know a single gamer who has…

I have but only because its that or an XBox for MS exclusives.

Prices are absurd (hence sales and freebies), the only thing I have found to be a bonus was the groove playlist support for the Forza radios and I wonder about that feature now that MS have killed groove….
Posted by Ttaskmaster - Fri 20 Oct 2017 12:44

cheesemp
Has anyone bought a UWP game? I don't know a single gamer who has…

I wouldn't know if it was UWP or not…