The next generation of consoles from Sony and Microsoft won’t blow your socks off with new capabilities or gameplay options compared to the current generation. So says legendary programmer John Carmack of id Software in an interview with Gamesindustry International.

Mr Carmack asserts that the current generation of consoles can do pretty much anything games designers can envisage with just a slightly lower frame rate or slightly lower resolution than they would ideally want. “Any creative vision that a designer could come up with, we can do a pretty good job representing on current generation and certainly on PC. In many ways I am not all that excited about the next generation. It will let us do everything we want to do now, with the knobs turned up.” He continued to sum up “It will be what we already have, but a lot better”. 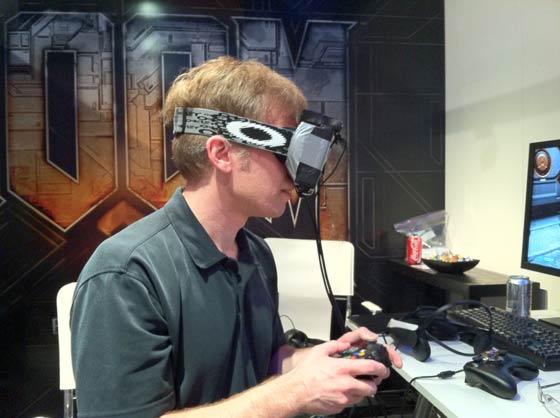 The most important opportunity for innovation in new games and consoles comes from peripherals and control devices similar to how the Wii brought motion control to the masses in the current generation of consoles. “Sony and Microsoft are going to fight over gigaflops and teraflops and GPUs and all this... Nintendo went and brought motion into the gaming sphere and while only having a tenth of the processing power was able to outsell all of them...”

Perhaps by sheer coincidence Mr Carmack was promoting a new Virtual Reality peripheral, a VR headset called Oculus Rift. This “highly immersive stereoscopic head mounted display” will be launching on Kickstarter this month. You can find out a lot more of the spec for these VR “goggles” from the link just above and you can watch an interview and short demo of the headset from the recent E3 below.

In a summing up, in a separate interview, John Carmack described his new VR headset in simple layman’s terms as “A 3D TV you can wear on your head with no ghosting” Also the headset tracks your head movements and relays that motion to the screen view, that’s an important part of the VR functionality. So far Sony has shown much more interest in the device than Microsoft, though it still sounds like a very pricy peripheral at this time, at around the $500 mark. The revolutionary Wii remote, which Mr Carmack referred to earlier, is much more accessibly priced.

Still it does seem to ring true that Sony and Microsoft will be offering buyers of their next gen systems more of the same games “with the knobs turned up”. Other commentators have predicted the refreshed next gen systems will fight more for the living room entertainment under-set-box position with movie streaming, downloads and other varied HD entertainment on your big screen, with less focus upon games. Also Microsoft may be less interested in Mr Carmack’s VR glasses because of their own AR (Augmented Reality) glasses project.

Posted by edvinasm - Thu 21 Jun 2012 16:11
Next big think is AI that will learn and environments that will change. I personally don't care about graphics any more. Most recent games look nice as is, just iron out bugs, optimise (GTA IV anyone?), improve physics (i.e. GT5 looks good enough but to see car rolling in a imaginary “twister” instead of real roll and crash is just not good enough) and add some new dimension (where are all promised growing and learning environments?).
Posted by Platinum - Thu 21 Jun 2012 17:29
Gief VR, Screw the disabled unfriendly Kinect.
Posted by crossy - Thu 21 Jun 2012 19:41

Hmm, and I suspect that Mr Carmack's new “wonder” device will be - like a lot of VR headsets - not really usable if you wear glasses.

And as to his comment about next gen being “what we already have, but better” I for one would be quite happy to settle for that - as long as the “better” is notably better. More processing power so we could have “smarter” AI would be high up my list of priorities.
Posted by norm - Thu 21 Jun 2012 20:33
How many gens away are we from photo-realistc graphics? : )

Personally I think peripherals are a gimmick and they should always be focusing on making games look more real.
Posted by HalloweenJack - Thu 21 Jun 2012 21:07
remind me again what groundbreaking AAA amazing title(s) carmack has made in the last 10 years?

is that the sound of wind i can hear??