An engineer at Imperial College, London has shown a newly developed material that can double as a battery and durable casing. Major car manufacturer Volvo has been interested enough to collaborate on the structural battery project hoping to lighten the load on future electric vehicles.

The structural component is the battery

“The material we have developed can carry mechanical load, it is a structural material, but it also allows us to store electrical energy.” said Dr Emile Greenhalgh, from the Department of Aeronautics at Imperial College in a new video. He and his colleagues have been collaborating with Volvo in the new structural battery development.

The new material is made by taking two layers of flexible woven carbon fibre (the electrodes) separating them with an insulating layer of glass fibre and infusing the whole sheet with a resin to give a hard structural material. The project was started in 2010 and the technology proved to be viable for real-world applications so the team at Imperial have been working with Volvo on building car bodies. If the battery and the body can be the combined in an electric car the range can be drastically increased, assuming the weight is proportionally decreased by the combination. The range of many electric vehicles is a major barrier to mass adoption. Thus the researchers have been looking for “a material that simultaneously stores electrical energy and gives good mechanical properties” this new material breakthrough “gives us both those things at the same time” according to Dr Greenhalgh. 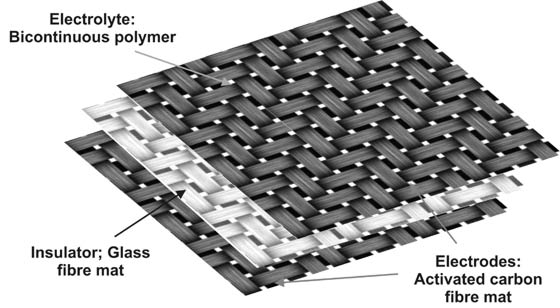 The “technology is very mature” and can be also applied to aircraft, military drones, tablet cases and safety equipment among other things said Dr Greenhalgh. Miniaturisation and flexibility in design are driving forces in the gadget world and the flexibility in design offered by structural batteries may see us having thinner, lighter and even more durable tablets, laptops and smartphones in the not too distant future.

davesom555
What happens if the material gets struck by lightning. Does it charge up? :)

Are you confusing this with some other research by a Dr Frankenstein?
Posted by davesom555 - Wed 11 Jul 2012 09:55
Well, it is similar, Frankenstein's monster was more of a chemical battery though, much like the BAE systems structural battery!
Posted by Teamsreth - Wed 11 Jul 2012 10:06
Wouldn't these body panels be amazingly expensive if damaged? I would have thought using this material would have been better as a chassis? Although I suppose that surface area is the key.

Still, a decent range might make it viable, cost dependant.
Posted by Tartanpimpernel - Wed 11 Jul 2012 11:15
Guess for vehicles this would be coupled to the breakthrough in wireless charging ?