Liberty Global and Telefónica are to merge UK operations, bringing together their respective Virgin Media and O2 telecoms brands. In a press release about the deal, Telefónica crowed that the newly announced 50-50 joint venture "brings together Virgin Media, the U.K.’s fastest broadband network, and O2, the country’s largest mobile platform". The deal is valued at £31.4 billion, with O2 given a £12.7 billion valuation, and Virgin Media valued at £18.7 billion. 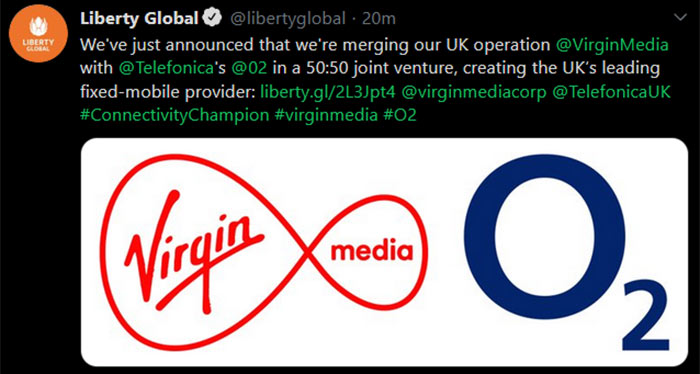 The newly formed competitor to BT will have the scale to make a big difference in the UK telecoms sector. Telefónica says that the stronger fixed line and mobile competitor will be investing £10bn in the UK over the next five years and it will expand Virgin Media's giga-ready network and O2's 5G mobile deployment for the benefit of consumers, businesses and the public sector. 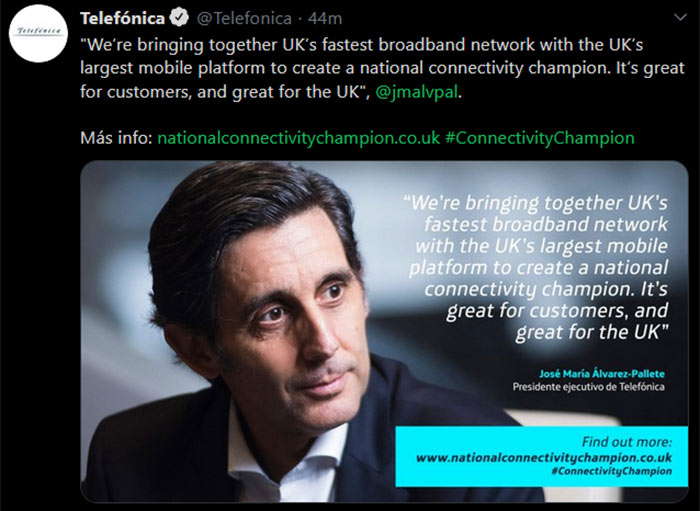 As the two JV businesses are closely related but don't have too much overlap there will be "substantial synergies valued at £6.2 billion on a net present value basis after integration costs". However, the binding together of the businesses won't be able to start until approx the middle of 2021, as the deal is subject to regulatory approvals, consummation of the recapitalizations, and other customary closing conditions.

Telefónica shared some more details of the synergistic opportunity ahead. Key sources of the JV benefits are bullet pointed as follows:

Additionally the pairing will provide significant cross-selling opportunity and scale. However to offset all the benefits of the JV slightly, there will be integration costs of approx £700 million.

The combined group will start with a great big chunk of the UK market, consisting of 46 million video, broadband and mobile subscribers, bringing in £11 billion in annual revenue, using today's figures.

UK telecoms watchdog Ofcom will have to ponder over the merger, and it is expected to approve it. In favour of this deal, Virgin Media doesn't have any 5G spectrum to bring along, which would have hampered any such JV between O2 and the likes of Vodafone, Three or EE/BT.

philehidiot
The problem is that I think they may end up competing on poor customer service rather than real products.

To be fair I've found them OK. Not great, not bad but thoroughly ok.

Better than quite a few others. TalkTalk cough, 3 cough
Posted by mark_a_scott - Thu 07 May 2020 11:22
With what is going on around the airlines, maybe it is time to change the name away from Virgin? I am not sure if O2 is a strong enough brand for quad play services though.