At the weekend the UK government published a press release sharing its ideas about tackling "the full range of online harm". In brief, the government wants the UK to be "the safest place in world to be online," by directly tackling cyberbullying, child exploitation, extremism, and more. The government will work alongside social media companies, regulators, charities, educators, advertising companies, and other related technology companies to achieve its goals. 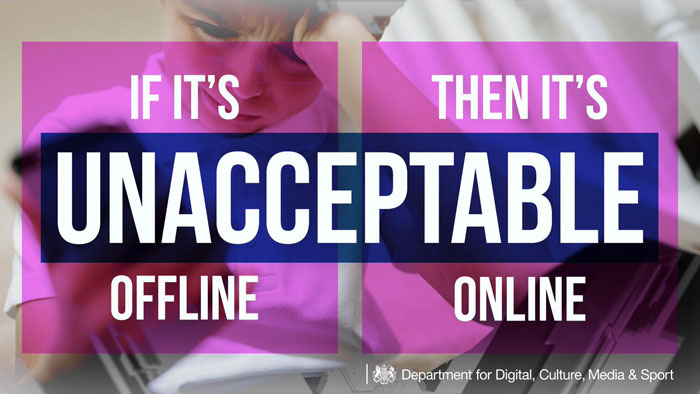 A consultation with the public found that the majority of internet users felt powerless to address online safety and that technology companies operate "without sufficient oversight or transparency". While the government admits several tech giants have made important steps to address these concerns recently it want to improve the situation over all platforms.

Department for Digital, Culture, Media and Sport (DCMS) Secretary of State, Matt Hancock, took part in an interview yesterday on The Andrew Marr Show. He said that 10 out of 14 of the largest social media firms declined to turn up to discuss internet safety with the government and that snub has spurred the government on in deciding to legislate.

"Digital technology is overwhelmingly a force for good across the world and we must always champion innovation and change for the better," said Mr Hancock. "At the same time I have been clear that we have to address the Wild West elements of the Internet through legislation, in a way that supports innovation. We strongly support technology companies to start up and grow, and we want to work with them to keep our citizens safe." He went on to say that freedom on the internet has to be balanced with the need for safety - just like our offline lives. 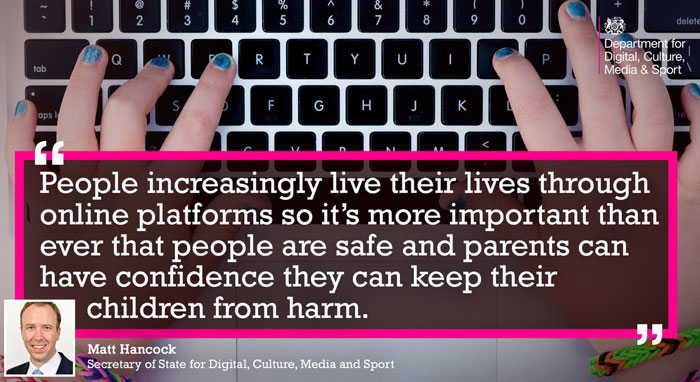 Of course the government needs a stick to gain compliance, after it has failed with a consensual approach to negotiating with the big social media firms. Hancock touched upon age verification being important to internet safety. Furthermore, he warned that online businesses like social media firms "could be fined up to 4 per cent of their global turnover under a data protection bill currently going through parliament," reports the Independent.

Posted by Tabbykatze - Mon 21 May 2018 12:31
Does that read like “If it's unacceptable offline then it's acceptable online”?

I think it's the placement of the unacceptable xD
Posted by Spud1 - Mon 21 May 2018 13:03
The UK is becoming a less and less desirable place to live it seems :( This may well be headlined as being about protecting the vulnerable, but we all know that this will be used as another excuse to attack the freedom of the internet, encryption, and technology in general.

A far better approach would be to educate people and yes, let them make mistakes…sure its more expensive, takes longer and ultimately means some people will lose some money or get hurt - but i'd rather that then continue to erode our freedoms :( The only area where I can see a half argument is for child safety - but that is up to the parents IMO, not the government.
Posted by Corky34 - Mon 21 May 2018 13:06
All they need to do now is to define what “unacceptable” and “harm” means in legal terms.

Also why do our MPs think the internet begins and ends with the largest social media firms, it's almost like they don't understand what the internet is.
Posted by Ozaron - Mon 21 May 2018 13:07
“Help, people are expressing themselves and acting online the way they have a right to in the real world, and I don't know what to do about it! Oh please will the government save me?”

Corky34
All they need to do now is to define what “unacceptable” “harm” means in legal terms.

Also why do our MPs think the internet begins and ends with the largest social media firms, it's almost like they don't understand what the internet is.

It's probably because that's where their community talks to them, where they talk to their community, and one of few places they ever need or visit. Besides Google.
Posted by FRISH - Mon 21 May 2018 13:19
On one hand I think more should be done. Way too many people are disgustingly hateful online, and that behaviour would have stronger repercussions in the real world. On the other hand I'm worried how it will actually play out. People nowadays seem to take a difference of opinion as a personal attack that they need to be protected from, but somehow are allowed to themselves spread hate speech.

Right now I don't think the online world is entirely healthy, but I'm not sure what the ultimate solution is.