Valve has removed the option to pay for Steam goods using Bitcoin, for now. In a blog post the Steam Team reasoned that Bitcoin was far too volatile for payments, and transaction fees are prohibitive for low value purchases such as PC games and accessories. 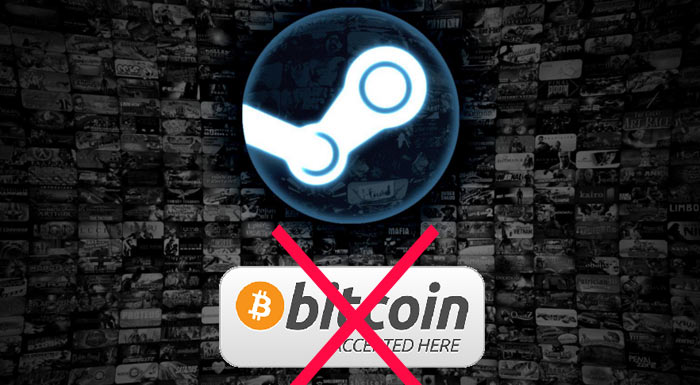 We must agree with the sentiments regarding the volatility of Bitcoin over recent months. It has only been 10 days or so since the last headline grabbing milestone for Bitcoin. It approached US$10,000 back on 27th November. However, earlier today it broke the $15,000 (twice), and at the time of writing is worth $14,839. 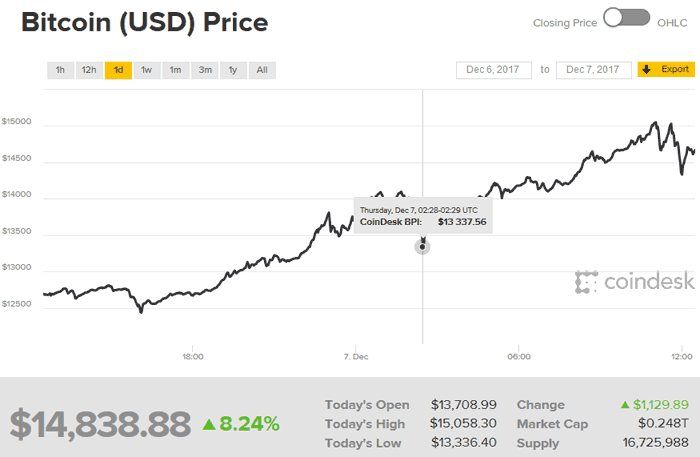 Such volatility can mean that a vendor accepts payments in Bitcoin and the value can lose as much as 25 per cent over a period of days, suggests the Steam blog (though the current trend is in the opposite direction). If the Bitcoin value changes significantly between purchase and supply Steam can resolve the issue by refund, or by asking for more funds - but either of these actions will invoke an additional transfer fee.

It is Bitcoin's astronomical monetary value success that has probably hurt its utility value for low value transactions the most. Valve states that when it started accepting payments for its wares via Bitcoin the transaction fees were roughly $0.20. Valve says that it now faces a fixed Bitcoin transaction fee, out of its control, which is $20 a time. That doesn't sound like a very economical way to buy a game or two in a Steam Sale… 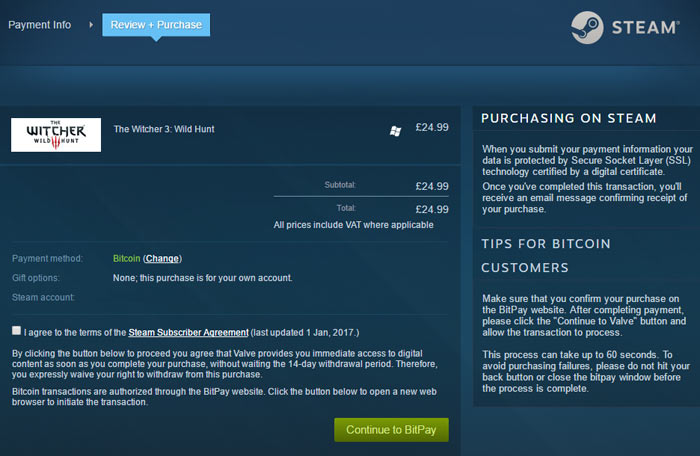 With the above in mind, Valve concluded that "it has become untenable to support Bitcoin as a payment option". If things change, to make sense for Valve and the Steam community, then using Bitcoin for transactions will be evaluated.

At the same time though bitcoin in itself still has a LOT of growing to do before it crashes, I can see it hitting anywhere between £50,000 - £300,000 before demand falls flat.

EvilCycle
At the same time though bitcoin in itself still has a LOT of growing to do before it crashes, I can see it hitting anywhere between £50,000 - £300,000 before demand falls flat.

peterb
Can you post a link to your Crystal Ball supplier please? :)

Crystal something, at least :p
Posted by EvilCycle - Fri 08 Dec 2017 09:25
Yes it is some outlandish speculation I am not a complete nutter, but there are some calculations involved in my guesswork, previous market crashes against items with similar hallmarks to bitcoin together with the comparison of the worth of gold vs availability has brought me to those figures.

I won't go as far as saying crypto currencies and block chains will never work, but I truly believe bitcoin in itself is setting up for a car crash after some more growth.
Posted by Millennium - Fri 08 Dec 2017 11:10
The transaction fees were up to $20 (as was probably mentioned in the linked article) no-one would buy even a $50 game with a $20 transaction fee unless they had money to burn.

I can see Bitcoin hitting maybe $17k (possibly as Evil Cycle says a lot more) but the government regulation, co-option and inevitable crash will come. How big and bad it is is anyone's guess. I should probably invest in it but I don't like it environmentally so I will likely refrain.