A couple of months back, on Monday 14th August to be exact, one of the most interesting news pieces kicking off the week was Bitcoin’s surge past $4,000 in value. The first comments on that story proclaimed Bitcoin was a bubble about to burst. However, if one had invested in Bitcoin at that time, just a few weeks ago, today you would be able to sell-up for a 50 per cent gain – a very tidy profit when banks offer a fraction of a per cent a year in savings accounts. Yes, Bitcoin’s value breached $6,000 this weekend, hitting a record high of $6,147.07 (£4,660) just a day after pushing through the $6,000 mark. 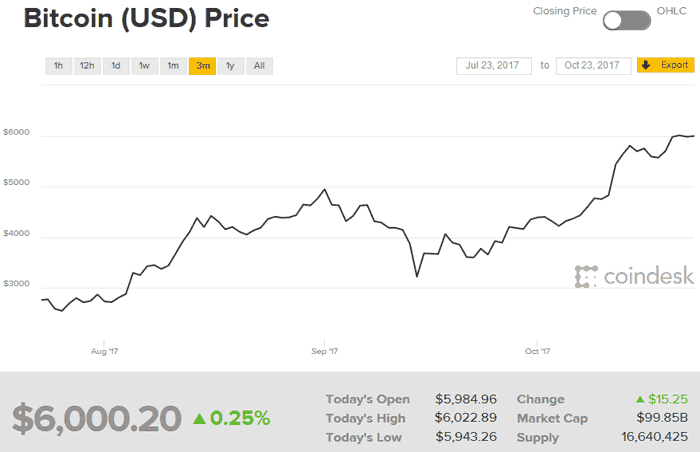 CNBC provides some background to this impressive rise in value. There are a couple of big reasons for Bitcoin’s recent ascent to new highs. First of all there is an upcoming fork (13th Nov) in the cryptocurrency which will result in the creation of a new currency called Bitcoin Gold. Holders of Bitcoin “will get some Bitcoin Gold when it is issued, essentially giving them free money,” says CNBC. Secondly there is talk of China reversing its ban on cryptocurrency exchanges, a move which could provide a big boost to Bitcoin.

In a recent CNBC survey, the majority of 23,000 respondents tipped Bitcoin as heading to over $10,000. The timescale for this ascent could be as little as the next six months reckons one former ‘legendary’ hedge fund manager. It sounds like there could be lots of volatility leading up to 13th Nov and after that there might be some kind of sell-off – similar to when shares get a dividend paid to holders on a certain date. Please don’t buy or sell Bitcoin based on the news presented here, only do so after your own thorough research and using cash reserves you can afford to depreciate.

Posted by OilSheikh - Mon 23 Oct 2017 11:35
Does anyone have experience with Bitcoins?
I looked into it years ago and apparently you had to install a program on your PC and after keeping your PC on for a while and you CPU being maxed out, you got only one bitcoin. The electricity used didn't make this sound like attractive
Posted by Queelis - Mon 23 Oct 2017 12:36

OilSheikh
Does anyone have experience with Bitcoins?
I looked into it years ago and apparently you had to install a program on your PC and after keeping your PC on for a while and you CPU being maxed out, you got only one bitcoin. The electricity used didn't make this sound like attractive

You're thinking about mining bitcoins. Noone does that anymore, as the difficulty is such that mining using CPU or GPU is not feasible. But to HAVE bitcoins, you can a) get a wallet and hold it in your PC, b) buy it on trading sites.

Still holding a little but only peanuts compared to what I could have had :/
Posted by Platinum - Mon 23 Oct 2017 16:53
I once had 500k Energycoin, they had a massive spike during the Etherium mining boom, If I had them all at that time I could have sold for £148k, Yea…