In a recent news article about TSMC N5 I commented upon Taiwan's resilience to Covid-19 so far, despite its proximity to mainland China. The country has done extremely well in containing the virus, stopping it spreading between residents. On Tuesday it had only 77 known cases, and one death. However a large number of people have started entering the island, returning from tours for example, bringing with them lots of new cases in the last day or two.

Now the Taiwanese government has decided to basically lock down the country to seal up this infection vector. There is a report about this move on Focus Taiwan, and the official Taoyuan (Taipei) Airport Twitter account shared the guidance in both Chinese and English. 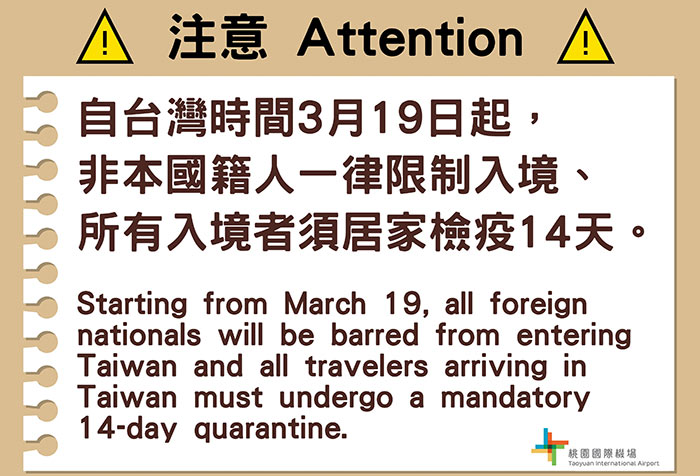 Above is the official notice but there is some further explanation about who is and is not barred from entry to Taiwan, as quoted below.

Of course the above notice of closure to all foreign nationals brings the important Computex 2020 show into question. This is perhaps the biggest, most important show for PC enthusiasts. The last official news from the Computex 2020 organisers, TAITRA, was shared on 25th Feb and the show was still on at that point, supported by stringent precautions, health monitoring, and sanitisation.

With no end date set for Taiwan's border closure to visitors, it really puts the Computex 2020 schedule in doubt. It must be noted that June is still quite a long time away but it is now looking likely Computex 2020 will at least be postponed. Such a schedule change will probably impact the new product announcement schedules of would-be participants - as we have seen before.