Intel had published its latest set of financial results covering its Q4 and FY 2019 accounting periods. Results were better than expected, with sales up eight per cent to $20.21bn, somewhat better than the $19.23 billion analysts predicted. As is usual for a share exceeding market expectations, Intel's shares were up in after hours trading by as much as six per cent.

Electronics and computers sectors have become a hot sector recently with healthy demand for a wide range of tech products in evidence. For Intel there was particularly pleasing results from its data centre business. Thus segment generated $7.2bn in Q4, up 19 per cent compared with last year. High margin sales into data centres did much to help fill Intel's coffers. 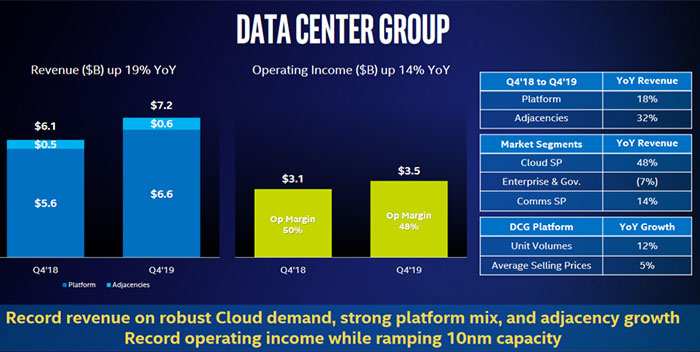 As for the Client Computing (PC) segment, Intel only saw modest growth. A two per cent rise to $10bn in sales for PCs was still better than analysts expected though. Helping power up Intel's PC results was the stronger than expected PC market in the run up to the EOL of Windows 7.

Intel could have done better though; everyone knows it is struggling to produce enough of its chips to keep partners like Acer, Asus, Dell, HP and Lenovo happy. There are also signs that AMD is starting to take bites out of Intel's dominant position, especially coming into 2020 with AMD launching the Ryzen 4000 Series processors for mobile and the amount of design wins we have seen for it at CES 2020. At the beginning of 2018 Intel's laptop market share was almost 96 per cent, falling to under 83 per cent late last year. It will be interesting to see how the balance continues to change in 2020.

Intel's small programmable solutions group, selling FPGAs and so on, didn't do so well, with sales in Q4 sliding 17 per cent to $505m. 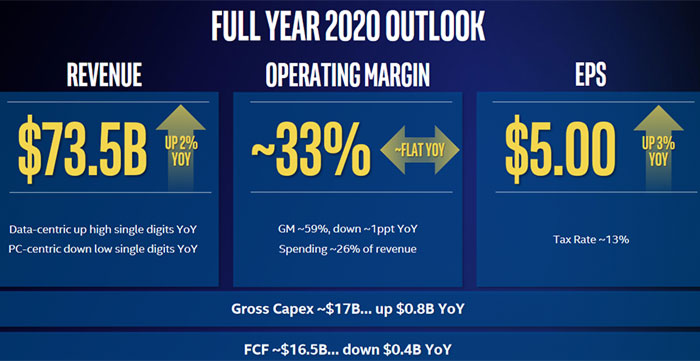 Looking ahead to the rest of 2020, Intel's outlook is looking unremarkable but steady, if it all pans out as planned. Data centre looks like it could carry the company onto a positive 2020, even if PC-centric revenue disappoints in the coming year.

Posted by darcotech - Fri 24 Jan 2020 11:28
If you go to Dell, there are no AMD based PCs! Probably the situation is similar with other big names in IT. HP has some.
To know that on Amazon, AMD had TOP 10 CPUs sold filled with their models, and big names, the ones that actually sell in huge numbers are not taking AMD seriously is sad. And question how all that works.
I remember Dell had 27" All In One PC with Threadripper. Now, they are selling that thing with Intel CPU.
Shame on them.
Posted by rave_alan - Sun 26 Jan 2020 15:01
Probably amd can't produce such amount of hardware for big names, their market share is much smaller and ther production capacity is not enough at the moment.
Posted by DanceswithUnix - Mon 27 Jan 2020 07:46

rave_alan
Probably amd can't produce such amount of hardware for big names, their market share is much smaller and ther production capacity is not enough at the moment.

Even if Intel are losing CPU market share, right now they are churning out silicon at their full capacity and selling the lot so short term they are raking it in.

… and yes, I looked on the Dell website for a Ryzen 3600 based PC for work and I can't buy one from them. Seems they are still the best friend money can buy for Intel.

Edit: To be fair I'm having problems speccing a sane development system on Scan and Overclockers as well. Seems they think you either want the cheapest APU based system possible, or you want to run high end games bristling with LEDs and ugly windowed cases.