According to a report published today by WCCF Tech, AMD's CEO is looking to move to pastures new. Dr Lisa Su is currently preparing her successor to hold the reins at AMD, and will take up the #2 position at IBM in autumn, suggests the report.

Dr Su's departure from AMD, and her move to IBM, will be an industry shaking event, if it does indeed happen. I'm looking at the afterhours trading of AMD stock at the time of writing, just an hour or so since the source report was published and there has been an almost 5 per cent drop in the share price. Su has been at the forefront of AMD's rebuilding over recent years, and it would be hard to see anyone as a short-order replacement - meaning uncertainty for investors and the direction of the company.

WCCF Tech seeks to tie in its headlining revelation with the recent news of Rick Bergman re-joining AMD to become part of the Senior Leadership Team. This official AMD investor news piece says that Bergman will become the EVP of Computing and Graphics with responsibility for the company's high-performance PC, gaming and semi-custom businesses. Thus Bergman replaces Sandeep Chennakeshu, who has decided to leave AMD at the end of the month.

The WCCF Tech report suggests that Bergman isn't just a replacement, but is being groomed as the AMD CEO's successor. This would make sense as Bergman has 30 years industry experience including plenty of time at ATi/AMD, and just completed a seven year stint as CEO of Synaptics. Lisa Su is going to launch the AMD Rome CPUs tomorrow, which are expected to be very well received, and then will make time to help settle-in Bergman, for a smooth transition. 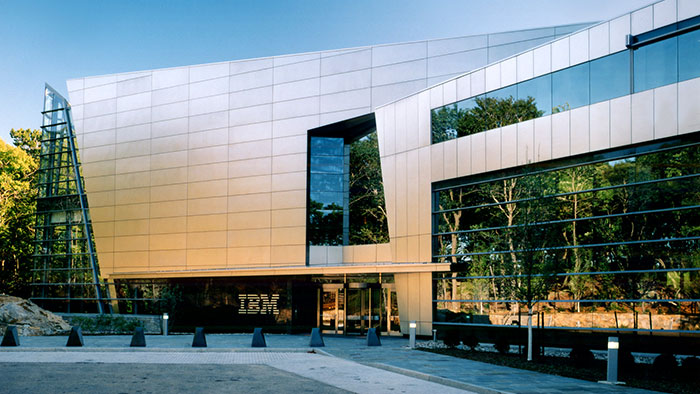 Why would Lisa Su leave AMD? Apparently she has her eye on the #2 position at IBM, and has an eventual goal to replace Ginni Rometty as CEO and President of IBM in the longer term. IBM stewardship has been an ambition for Su for a long time, says the WCCF reporter.

Please take the above report with a pinch of salt. The source goes so far as saying that "decisions this high up can change at a moment's notice (and completely)," as a get-out clause. Furthermore, he backs up today's story by reminding us that he broke the Raja Koduri leaving AMD story, which was in fact a HEXUS exclusive - with Koduri's memo to his ex-colleagues reproduced in full.

A few minutes ago Dr Lisa Su took to Twitter to deny the substance of the WCCF report. Su wrote "Just for the record, zero truth to this rumour. I love @amd and the best is yet to come!" 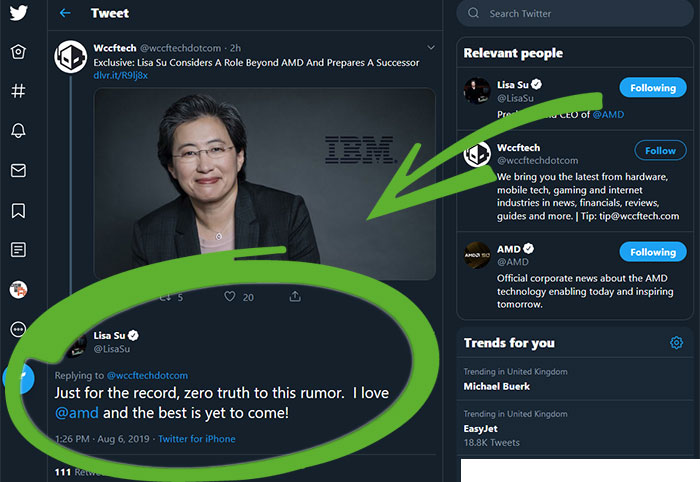 Posted by philehidiot - Tue 06 Aug 2019 13:34
Oooh, I hope no one has just bought AMD stock.
Posted by KultiVator - Tue 06 Aug 2019 13:40
This is disappointing - AMD need some stability to prove that the recent up-turn in their fortunes can be sustained. Also from Dr Su's perspective, moving from a lean and agile firm, like AMD, to a slow lumbering giant like IBM is likely to be an exercise in frustration.
Posted by darcotech - Tue 06 Aug 2019 13:40
Update: Lisa Su has denied this story. The article will remain live for those that want to read it
Posted by Tabbykatze - Tue 06 Aug 2019 14:57
WCCFTech, if anyone is going to be an outlet for rumours to negatively affect AMD through under the table moneys my money would be on them.

Going out on a limb: but what a ridiculous rumour, AMD are on the up and up and if they can keep their trajectory rolling they will be seriously competitive in many markets and opens them up for new segments in other verticals and technical spaces. Leaving AMD now would be very damaging to their reputation and their upward velocity.
Posted by philehidiot - Tue 06 Aug 2019 15:15
Well I tried to post this but it seems to have disappeared:

I really hope she isn't moving on to take a number two position anywhere. This woman does not deserve to be number 2 at any company, no matter how large. She has taken AMD from a failing, very poor position to turning a profit and competing with the big boys. She may end up being sought after by basket case companies as a fixer, which is someone with a rare talent worth a lot of monies.