Nvidia's acquisition of Arm from Softbank for US$40 billion was announced back in mid-September 2020. It was very big news as Arm IPs are so important for the tech industry in general. Thus, the deal and its potential repercussions have been making waves ever since the announcement. In January HEXUS reported on the UK regulator's intention to look closely at the Nvidia Arm deal – remember that Arm is Japanese owned but Cambridge-UK based. Regulators from other countries are also scrutinising the deal, and the US Federal Trade Commission (FTC) is the latest to open an in-depth review of the deal. 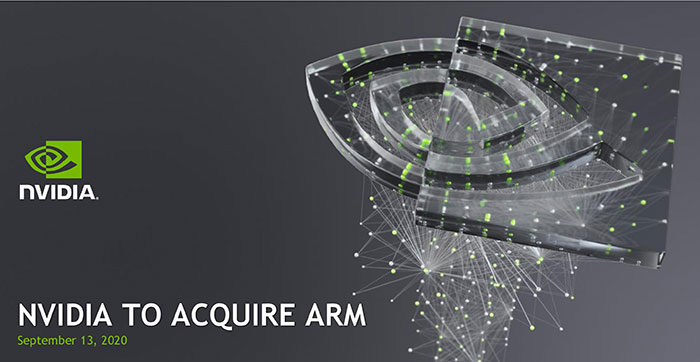 The Financial Times reports that the FTC is asking big tech players in the US about their thoughts, and particularly their concerns about Nvidia's acquisition of Arm. Its sources familiar with the review mention Qualcomm specifically. Issues that are likely to cause ire are; that Nvidia could favour its own data centre chip business vs other companies using Arm designs, and Nvidia would get sensitive data about its rivals which often consult with Arm about designs and plans.

Nvidia didn't comment on the FTC investigation, reports the FT. Instead, it trotted out a statement saying that it was "confident that both regulators and customers will see the benefits of our plan to continue Arm’s open licensing model and ensure a transparent, collaborative relationship with Arm’s licensees".

Looking for other reports about Nvidia-Arm, I see that City A.M.'s sources indicate that Google and Microsoft have added their voices of disapproval to the deal going ahead. Like Qualcomm these two tech giants see the acquisition as a big risk to competition.

Arm ships about 842 chips per second

Posted by Tabbykatze - Mon 15 Feb 2021 12:54
As discussed many times, no Licensee should ever become the licensor, especially for something that is globally utilised so heavily. It creates an unhealthy precedent and I doubt any company that licenses ARM IP is going to be happy.
Posted by lumireleon - Mon 15 Feb 2021 13:41
I doubt if Nvidia will change the business model of ARM because ARM is successful in the mobile sector not data centre or desktop compute. Nvidia is simply looking for other ways to expand its portfolio. Softbank wanted to sell and thank God intel or Apple was not interested. The desktop and server software stack is EXTREMELY complicated and x86 is here to stay for decades to come just in-case you are worried.
Posted by Tabbykatze - Mon 15 Feb 2021 14:09

lumireleon
I doubt if Nvidia will change the business model of ARM because ARM is successful in the mobile sector not data centre or desktop compute.

You are quite categorically wrong and quite naive to think just because it's “EXTREMELY complicated” doesn't mean others in the industry are just too dumb to work it out. ARM is also quite complicated and also quite powerful, the limiting factor is software compatibility with the chicken and the egg issue. There were no chips strong enough/diverse enough to support mainstream software and there was no software implicitly compatible with ARM enough to widen the market. But now major players are weighing in on ARM with substantial investment (and RISC-V), it's becoming (read: become) a competitor.

ARM is used in growing excess in networking, datacentre, compute and even Desktop. Apples M1 chip is just the tip of the iceberg.

Both Microsoft, Amazon and Google have heavy investment into Datacentre ARM (Amazons Neoverse is quite successful).

Frankly, Nvidias purchase observationally looks to be a threefold:
-ARM is going through an evolution, it's become almost a juxtaposed brand alongside x86 in the desktop and Datacentre space. Due to that growth, there is substantial market growth meaning sweet sweet licensing money
-If Nvidia gets a hold of the ARM stack from development through to licensing, they get a leg up on ALL of the competition, regardless of any BS “anti-compete” paper which in the super-scale enterprise world isn't worth the paper it's written on (See AMD v Intel 2009)
-(tinfoil hat time) I would be willing to place a small amount of money that Nvidia was coaxed to looking at ARM because Nvidia is a US based company and if they acquired ARM it would become a defacto US business and therefore they could effectively cut off China from the second largest CPU design globally, setting China back years if not decades. The only reason why China still got access to ARM during the Trump restrictions was because they said “we're UK based and owned by Japan, some US entities contribute to ARM but that does not imply US control” so ARM just shrugged it off and carried on.

Nvidia may not be the worst business to get a hold of ARM but they are certainly not the best to get a hold of it either. No business with a stake in ARM as a licensee should own such a globally critical business.
Posted by will19565 - Mon 15 Feb 2021 14:13

lumireleon
I doubt if Nvidia will change the business model of ARM because ARM is successful in the mobile sector not data centre or desktop compute.

<snip>I would be willing to place a small amount of money that Nvidia was coaxed to looking at ARM because Nvidia is a US based company and if they acquired ARM it would become a defacto US business and therefore they could effectively cut off China from the second largest CPU design globally, setting China back years if not decades. <snip>

will19565
That I do not see as a bad thing, China needs to be stopped

Stopped from what? Being a second USA?