In a statement accompanying the results, AMD CEO Dr Lisa Su stated that AMD "significantly accelerated our business in 2020". She added that she was confident of continued growth in 2021, saying she was "excited about the opportunities ahead and very confident in our long-term strategy," going forward. The official AMD guidance for 2021 is that it will generate $3.2bn revenue (Flat QoQ, +79 per cent YoY) in Q1, and $13.37bn in revenue during the full year, up 37 per cent. 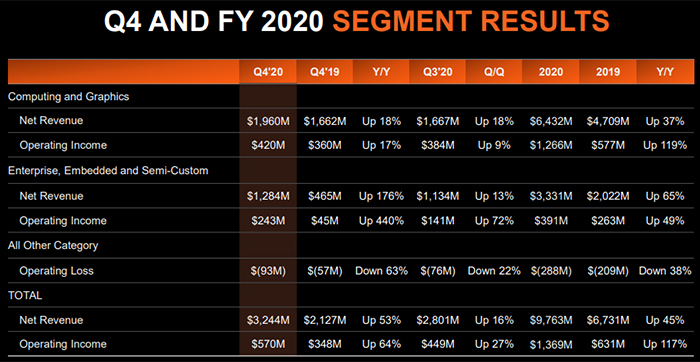 Though the results beat Wall Street's already high expectations for the chip designer, stock was flat in after-hours trading, probably due to the relatively modest outlook (compared with this exceptional year). However, one must remember its shares are up 85 per cent over the last year.

The largest boost for AMD in the last year came from its Enterprise, Embedded and Semi Custom segment. Here it saw revenue of $1.28bn in Q4, which is up 176 per cent compared with last year. The main drivers for this uplift were record Epyc processor sales and string demand for next gen consoles from Microsoft and Sony.

In AMD's Computing and Graphics Segment, the revenue was up 18 per cent YoY primarily due to strong Ryzen CPU sales. Obvious to us is that it didn't sell that many Radeon 6000 series GPUs, for example, as stock was/is very hard for consumers to find.

To keep up its momentum and attempt to stay ahead of competitors a tech company like AMD must invest heavily. Of course the management knows this and the rising tide of revenue is allowing AMD to significantly boost its R&D budget. Back in 2018 it started the year (Q1 2018) by investing $343m in R&D; by the end of 2020 its quarterly investment in R&D had risen to $573m. Putting some Tech Titan perspective on this sum, though it might seem a huge amount of cash, it is about 20x less than what Intel is spending on its R&D activities every quarter.

Posted by LSG501 - Wed 27 Jan 2021 10:14
And you have to wonder how much better it could have been if there was a decent amount of stock so you could actually buy their latest cpu's and gpu's…
Posted by Gentle Viking - Wed 27 Jan 2021 10:44
Well someone must be buying them, or scalpers would not exist, and there would be some stock at least.

I am very glad i do not have to buy anything in this perfect storm of smelly stuff.

And the figures also show a huge demand as echoed across most tech industries…
Impossible to predict and expect a global pandemic
Posted by Tabbykatze - Wed 27 Jan 2021 11:21

Well, there was a decent amount of stock, there was just an unexpected far larger amount of demand that they didn't account for (same with Nvidia).

They made bank on everything they produced, they didn't over extend into risky territory by overproducing, they did exactly what they wanted to do. It just wasn't what the end consumer wanted (MOAR).
Posted by lumireleon - Wed 27 Jan 2021 11:35
it is about 20x less than what Intel is spending on its R&D activities every quarter….strange (14nm++++) maybe because intel has a Fab and most engineers are working at the fab level leaving micro architecture designers (RAJA) with few coins.