AMD announced the workstation-optimised Ryzen Threadripper Pro CPUs last year. Designed as a bridge between regular Threadripper and server Epyc chips that use the same underlying Zen-based architecture, the Pro improves upon their standard counterparts by doubling the PCIe Gen 4 and memory channels to 128 lanes and 8-channel, respectively. They further add in Pro-level features such as enhanced security, manageability and business readiness, putting them on a much more equal footing with Epyc from a design point of view.

Expanding the feature-set requires a new supporting motherboard whose socket is known as sWRX8, meaning one cannot use these Pro chips in regular Threadripper boards and vice versa. AMD has since enabled end users to purchase Pro models and relevant motherboards on a DIY basis. At the time of launch, industry giant Lenovo had an OEM exclusive with Threadripper Pro and maximised potential by building the ThinkStation P620 workstation around the quartet of high-performance processors.

This preamble leads us on to the review machine of the day, housing headline specs that include an AMD Ryzen Threadripper Pro 3975WX 32-core, 64-thread processor, 128GB of DDR4-3200 memory in octo-channel configuration, and an AMD Radeon Pro W5700 8GB graphics card. 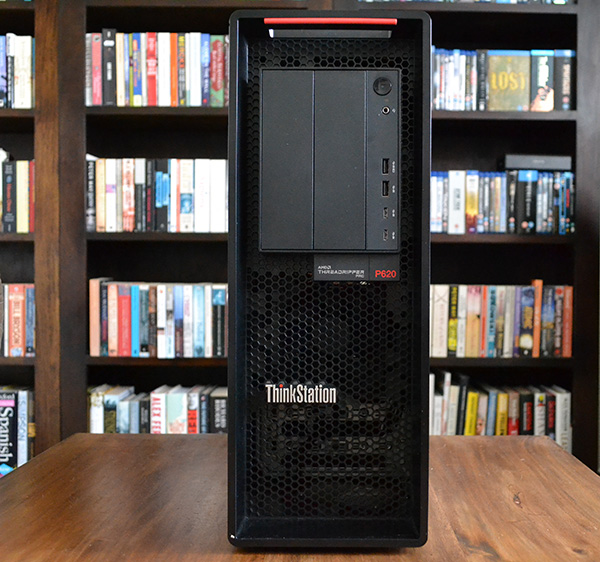 The ThinkStation P620 is restrained in size and appearance given the underlying horsepower. The chassis measures 440mm tall, 460mm deep and 165mm wide, making it comfortably more petite than the majority of consumer ATX enclosures. Thoughtful touches are abound. For example, for easy transportation, there's a comfortable carry handle on the front and enough space to grip on the rear. The side panel is a cinch to remove thanks to a click-out handle, and the front panel connections are robust. Designated as tower, there's no reason why it can't be situated horizontally.

Lenovo includes a couple of USB 3.2 Gen 2 Type-C (10Gbps) ports capable of providing 15W for charging, a USB 3.2 Gen 2 Type-A offering up to 11W, and a standard Type-A. Our sample includes the optional Flex module with a baked-in LED troubleshooting display which comes on during the Post sequence. To the left, Lenovo offers two vertically-mounted 5.25in bays which can house various additions such as a multi-card reader or optical drive.

The rear I/O, meanwhile, is home to four USB 3.2, a couple of older USB 2.0, audio, PS/2, and a 10G adapter from Aquantia. Lenovo uses a motherboard-connected 1,000W PSU from AcBel that slides out by lowering a securing handle. 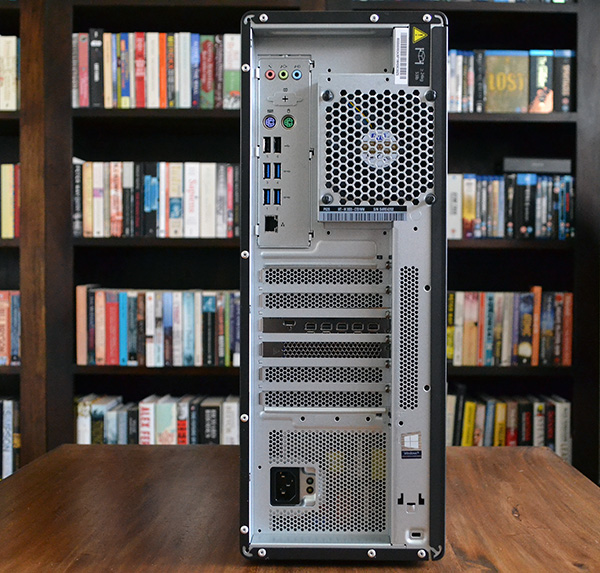 Cooling takes the form of a 120mm intake behind the front ThinkStation name, a 120mm exhaust out rear, a couple of 120s on the interesting CPU heatsink and a couple more 40mm fans on the memory.

The sWRX8 heatsink is actually one piece. Two vertical finned towers rise from it and are cooled by pushing air across them and out of the rear. This cooling arrangement is a modified version of the low-profile solutions used in slim servers.

Power runs through the bespoke 341.5mm x 253mm motherboard with the relevant graphics cables coming out by the front intake. A couple of M.2 slots are hidden under the heatsink by said graphics card, though users wanting more high-speed goodness can opt for either a PCIe-to-M.2 adapter or add a further two via a dedicated front-panel module. 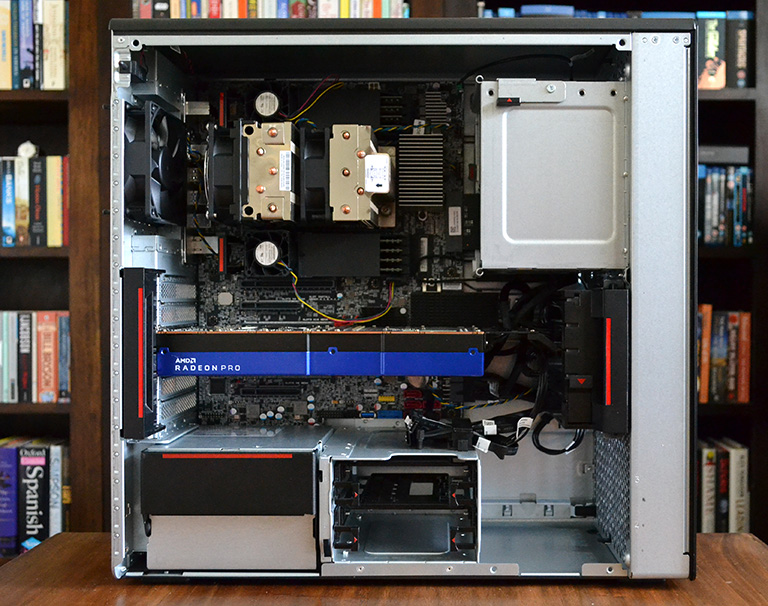 It's handy that memory and graphics card can all be replaced without troubling a screwdriver, while accessing the M.2 slots requires removing the GPU and the covering heatsink.

The modular nature of the build enables a vast array of specifications. Fully stacked, there's the opportunity of up to 2TB of octo-channel memory, around 20TB of M.2 storage, a Ryzen Threadripper Pro 3995WX, and two dual-slot or four single-slot graphics cards.

Our sample's configuration isn't quite so esoteric, and a point of concern is the meagre 256GB WD SN730 M.2 PCIe 3.0 drive. Lenovo does now offer larger-capacity PCIe 4.0 drives to make the most of the chipset's speed.

It's not all good news, mind you. The heatsinks surround the CPU socket feel flimsy compared to premium consumer models. They're also secured by pushpins, causing them to wobble at the slightest touch. One is also greeted with all the fans running at full chat during the lengthy boot sequence that lasts 75 seconds until the Windows login screen appears, so you don't want to be switching it on/off or rebooting on a frequent basis.

As configured, the sample fetches around £6,300 albeit with a minimum six-week lead time. The standard warranty provides three years of on-site cover, which can be extended to five years at the time of purchase.

Built to maximise the muscle from AMD's Threadripper Pro CPUs, let's now run some numbers on our brand-new workstation suite.