AMD's adoption of the PCIe 4.0 interface for M.2 storage has provided the necessary boon for vendors specialising in cutting-edge drives. Intel is moving over to the faster standard early next year across desktop and laptop so now is an opportune time to consider a performance trailblazer.

WD duly tips its hat into this ring with a new drive dubbed the Black SN850. Promising sequential read speeds of 7GB/s and up to a million IOPS wrapped up in capacities up to 2TB, it's a sure-fire way to turbocharge any modern PC. Let's take a closer look.

Available in 500GB, 1,000GB and 2,000GB models in the standard M.2 2280 form factor, WD also offers the trio with an RGB heatsink option. Available later in Q1 2021, cost increases by, we presume, around £15 in each instance. You'll appreciate a bit later on why they may be necessary.

SN850's performance characteristics are genuinely leading-edge. The use of an in-house-developed G2 controller makes the most of the PCIe 4.0 x4 interface potential. Compared to the previous champion, SN750, other than the obvious benefits of a faster conduit enabling the underlying triple-level cell (TLC) NAND and controller to stretch their legs all the way up to 7GB/s, WD says it has made improvements in latencies and implemented independent plane reads on the NAND in order to boost low queue depth performance.

New to this range, the controller uses a slice of dynamic single-level cell (SLC) memory for super-fast caching on frequently-used hot data and further reduces command overheads to achieve that seminal one million IOPS on a consumer SSD. Endurance, too, is robust across the range. Our 1TB sample can handle up to 600 complete drive writes over the five-year warranty period, or around 330GB per day, which is more than most enthusiasts will need.

The regular SN850 1TB drive's understated looks belie the performance on offer. Four chips reside under the branding - controller, two NAND and buffering DRAM - and WD doesn't see the merit in opting for a metallic or ceramic sticker we have seen on competitor drives recently. 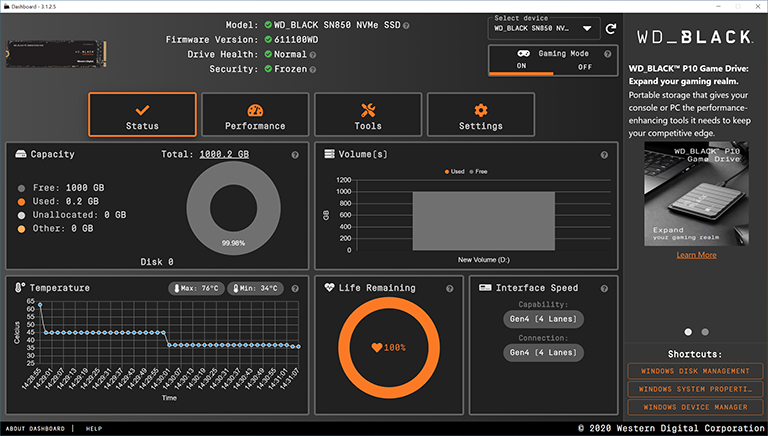 WD's Dashboard is one of the better, more intuitive SSD-supporting pieces of software around, but we don't like the associated WD product adverts on the right-hand side. The Game Mode overrides the power-saving features present as standard. Doing so, WD claims, enables the SSD to run at peak performance at all times, though we found no meaningful performance difference between regular and Game modes during testing. Those switching from other drives will appreciate this bundle comes with a copy of Acronis True Image WD 2020 for straightforward migration.

Priced at £230, which is comfortably over 2x that of the PCIe 3.0 SN550 reviewed recently, the SN850 is all about performance. Worthy of investment in that premium build you have been speccing up? Let's roll the benchmark dice.