WD is one of the more conservative SSD manufacturers out there. Whilst many of the smaller guys have jumped on the PCIe 4.0 bandwagon for superior sequential speeds on AMD's latest platforms, WD's M.2 NVMe offerings number only three PCIe 3.0 models - the premier SN750, SanDisk Extreme Pro - practically identical to the WD Black - and the value Blue SN550 which we're taking a look at today.

Successor to the popular SN500, the Blue SN550 NVMe ups the specification ante whilst keeping a keen eye on pricing. It is useful comparing the two budget models to see exactly what WD has done from one generation to the next.

We lamented the SN500's lack of a 1TB capacity option when reviewed last year. Things have moved on in the value segment since then, however, so while the SN550 does include a 1TB model, competitors in this space are now offering a maximum 2TB. It's as if WD remains off the capacity pace each generation. We can only assume the company wants to keep a 2TB capacity the preserve of the dearer SN750 and aforementioned SanDisk Extreme Pro.

Alluding to pricing, the SN550 is competitive as the 1TB model fetches £110 at retail, matching the likes of the Kingston A2000. The SN550 continues to use an in-house controller for the Blue line, but this time increases performance by interfacing with the system over a standard PCIe 3.0 x4 interface, rather than the cut-down x2 link for the SN500. Consequently, on this 1TB model, peak sequential speeds are quoted as 2,400MB/s read and 1,950MB/s write along with healthy IOPs on both fronts.

Unlike many others, it's interesting that WD continues with a DRAM-less design for its mainstream NVMe SSD, helping cut costs without any apparently inhibiting performance. WD gets around the need for onboard DRAM by using the Host Memory Buffer (HMB) feature that's been enabled since NVMe 1.2. Specifically, HMB caches mapping information on the host system side instead of on the drive, and WD says that allocating just 16MB of host memory is sufficient to achieve a 95 percent cache hit rate.

Even though WD's use of HMB effectively masks the need for DRAM for simple day-to-day operations - as you will see in the benchmarks section - don't be fooled into thinking it's the preferred solution; WD removes onboard memory for cost-cutting and power-efficiency reasons above all else, though does provide a sliver of SLC write cache on the drive for local buffering duties.

Notice something strange? The 1TB model features only two chips on a single-sided M.2 2280 PCB. The tiny four-channel controller and 1TB (16x512Gbit dies) TLC memory could easily be positioned on a smaller PCB. There's clear room for another NAND chip to double capacity to 2TB, should WD choose. Having such a simplified setup is shown indirectly by low peak power consumption across the three-capacity range. WD backs the Blue SN550 with solid endurance, too, as a total of 600TBW is equivalent to around 330GB of writing per day over the five-year warranty period.

Separating the two chips ought to work well for thermals, one would assume, as they sit at the same height and make a solid impression into the thermal tape present on most motherboard M.2 heatsinks. Without an additional heatsink, the drive idles at 41°C and peaks at 77°C inside our new Ryzen test system. These numbers are acceptable as long as performance remains solid. 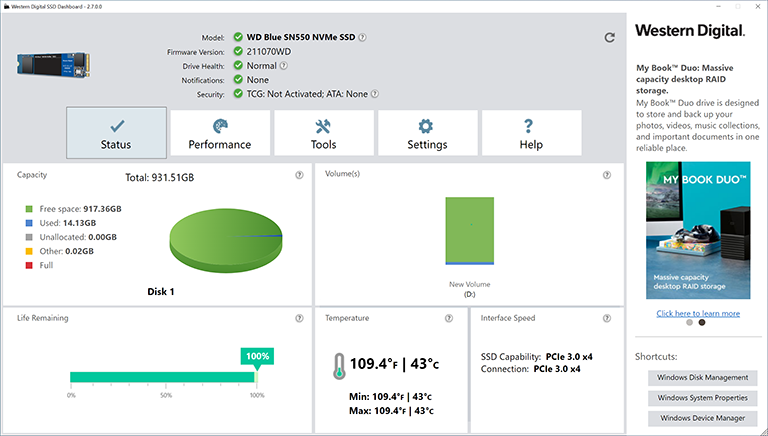 WD's accompanying SSD Dashboard utility offers simple metrics and an easy firmware upgrade function. As the Blue SN550 is a pure consumer play it's not a self-encryption drive (SED) so doesn't support the TCG OPAL standard, contrary to what the screenshot shows, yet those wanting some security can use software encryption such as BitLocker if you have the relevant version of Windows.

Helping users move data from their present drives, Acronis True Image WD Edition is an available download for this model. Summing up, WD improves upon the popular SN500 by offering higher capacities, faster speeds and a PCIe 3.0 x4 interface. Let's now see if that's enough for it stand out from other mainstream NVMe SSDs.