Purchasing anything other than generic computer memory is an exercise in favouring design aesthetics above all else. We say this because one company's DDR4-3600 CL18 is going to perform within a per cent or two of another company selling RAM with the same frequency and timings.

Appreciating the cache-rich nature of the latest AMD and Intel CPUs, the choice of memory for the enthusiast PC builder or upgrader has therefore more to do with how the modules will fit into the overall theme than any significant uptick in real-world performance. Got lots of lights in the PC? Go for RGB. Hanging with a stealth aesthetic, then lay down some cash on all-black heatspreaders.

Originating its widespread business from DRAM, Corsair is back at the style table with the release of Dominator Platinum RGB with white heatspreaders and gold trim. 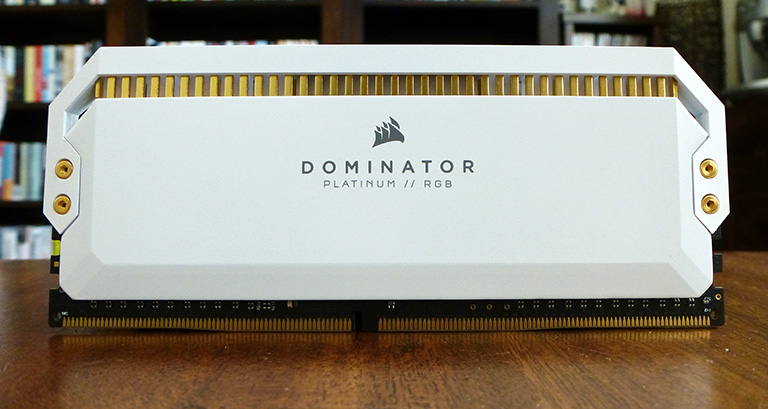 The underlying modules and build quality are generally no different from the regular Platinum RGB, which means excellence in both aspects. They are a definite step up from the Vengeance RGB Pro line on all design and build fronts. The sides are forged and anodised, the top bar uses die-cast zinc alloy, while the stamped aluminium fins and new light diffuser add a feeling of class.

The modules have 12 individually-addressable Capellix LEDs evenly spaced below the light diffuser whose design looks a lot like the gold contacts on the PCB. Being much smaller than regular LEDs on competing RAM means that Corsair can either save space or put more in, and it's the main reason why Dominator Platinum RGB doesn't need a fully-exposed diffuser to have the same, or greater, visual impact. Put simply, this is as good as RGB gets on system memory. Controlled by the overarching iCUE software for myriad effects, it's easy to sync with the rest of your system.

Capacities range from 16GB (2x8GB) to 128GB (8x16GB) and speeds from DDR4-3200 to DDR4-4000, though do be aware that opting for 16GB modules in any pack reduces maximum speed to 3,600MHz. We had expected higher speeds from Corsair's most exclusive, premium line of memory, and can't see why they're not available in, say, 4,800MHz frequencies. 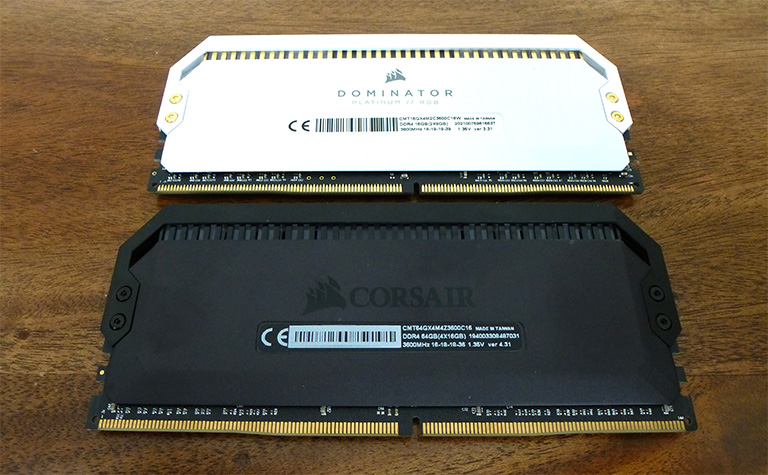 You'd ordinarily think these are regular Platinum RGBs dressed in a white heatspreader. That's mainly the case, but Corsair has taken a little time to restyle the lettering on the heatspreader for a cleaner look. The picture at the top of the page shows what you see when the memory is placed in almost every motherboard. It's a cleaner look than the Black version, subjectively speaking, and the inside 'spreader also look a little better.

That aside, some potential niggles remain. Being exactly the same size as the Black model translates to modules standing 55mm tall. One can argue if that's strictly necessary given the space-saving Capellix underpinnings. The extended height may cause an issue with some air coolers that don't feature an asymmetric design, though we imagine many will run these in conjunction with an AIO for maximum style effect. They certainly look the business in our 2020 Ryzen Test PC.

They retail for £155 or so, which is £30 more than the same capacity albeit with slower DDR4-3200 speeds but tighter CL16 latencies. To that end, they feel expensive, especially as a 32GB kit (2x16GB) of DDR4-3200 CL16 is £195. Wouldn't you keep the good looks and double-up on capacity for an extra £40? We would. And for those needing memory to be functional rather than beautiful and bold, a same-capacity pack of bog-standard Vengeance LPX is about half the money. Decisions, decisions.

Unlike Vengeance Pro, Corsair doesn't presently offer a twin-module dummy pack for those who want to make the most of the LED lighting.

Great on looks, let's now see how they perform.