Corsair is unveiling an entire catalogue of new products at CES 2020, and we've had an opportunity to spend some quality time with the K95 RGB Platinum XT. Introduced as a successor to 2017's K95 RGB Platinum, the XT ups the ante with a handful of new features designed to entice enthusiast gamers who are willing to splash out on a lavish keyboard.

How much are we talking? Corsair's latest will be arriving at US stores carrying a lofty $200 price tag excluding sales tax. In Europe and the UK, that translates to €230 and £210, respectively, inclusive of VAT. 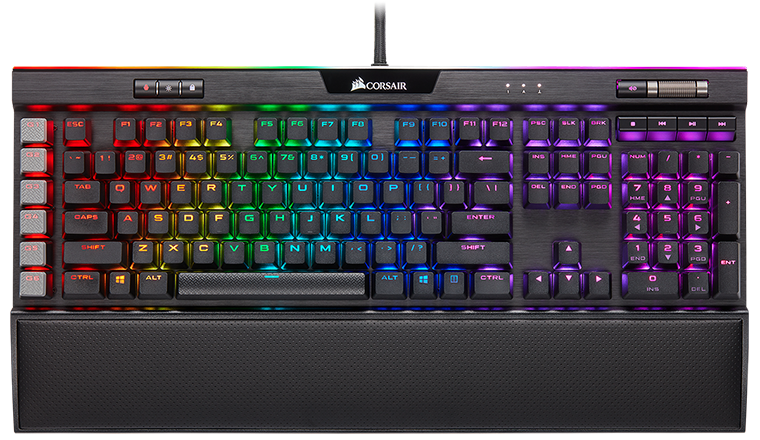 Lofty sums, and at first glance you may be wondering what exactly has changed. Dimensions are familiar at 465mm x 171mm x 36mm, weight goes unaltered at 1.31kg, a braided cable continues to occupy two USB ports on the host PC, and the XT retains the brushed-aluminium top plate synonymous with so many Corsair keyboards. This remains a well-built and suitably rigid piece of kit, but there's more to it than first meets the eye.

Upgraded switches deserve better keycaps and Corsair obliges with a PBT (polybutylene terephthalate) double-shot set carrying a textured finish said to aid grip. The keycap walls measure 1.5mm thick, lending a sense of greater stability, and the use of a white inner layer and black outer surface helps prevent signs of shine and wear after prolonged use. The only exceptions are the G-keys to the left of the keyboard, which continue to rely on a laser-etched finish. 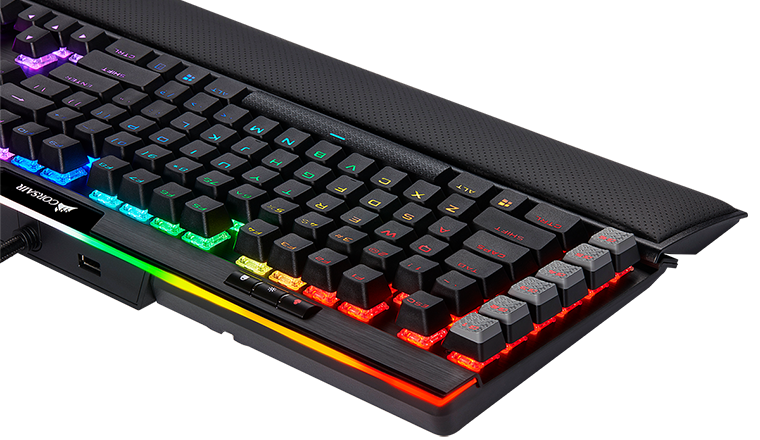 Corsair's revised keys do feel more luxurious to the touch, and so too does the detachable foam-filled leatherette palm rest, which extends the full length of the keyboard and adds an extra layer of comfort. None of the aforementioned enhancements will have existing K95 owners rushing out to upgrade, but they do come together to make this Corsair's best effort to date. RGB illumination remains vivid, with the 19-zone 'LightZone' across the top adding more flair, the multimedia controls and volume roller are present and accounted for, you get a basic USB 2.0 passthrough port, and the bundle continues to include contoured keycaps for either FPS or MOBA gaming.

K95 RGB Platinum XT ticks most of the relevant boxes, however the keycap font is still an acquired taste. Corsair's intention is to maximise the lighting effect, but in doing so the lettering appears oversized and cluttered. We had hoped to see the firm employ the same Capellix LEDs as its Dominator memory to allow for more even lighting that would in turn enable sleeker centralised lettering, but that sadly isn't the case. Corsair has opted instead to position almost all iconography on the upper half of the keycaps, where the lighting effect works best. On a UK layout, that means 4$€ are all inelegantly squeezed across the top of the #4 key, and having . and > on the same row just looks odd.

What really makes the XT stand out alongside its predecessor is the integration of Stream Deck functionality. Following its acquisition of Elgato, we've been waiting to see how Corsair would bring live-streaming shortcuts to its gaming peripherals, and the first signs are promising. 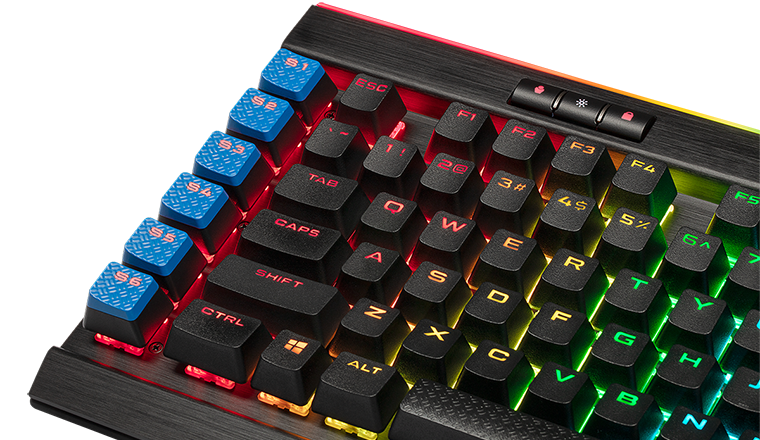 In terms of hardware, the six G-keys lining the keyboard's left side can be interchanged using blue-tipped S-keys that, while not as luxurious as the OLED buttons on dedicated Elgato hardware, are perfectly usable when up to half-a-dozen shortcuts are in play.

The keycaps themselves are entirely superficial - Stream Deck functions can be mapped to the pre-installed G-keys if you prefer - however it's a useful way to differentiate between shortcuts if you want to have both gaming macros and streaming shortcuts in action at any one time. There's no reason you can't mix-and-match using the supplied keycap remover tool. 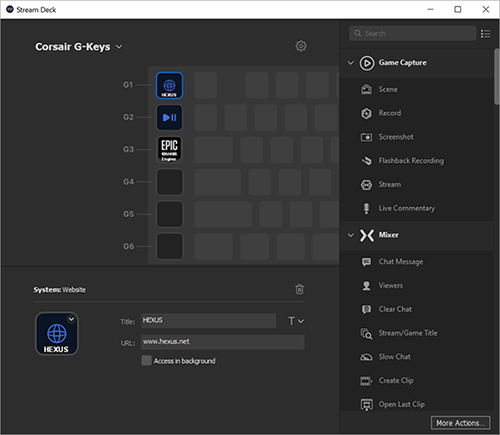 Getting up and running is as simple as downloading and installing the free Stream Deck app, which instantly recognises the six keys available to the K95 RGB Platinum XT. Assigning a function is merely a case of drag-and-drop, and a wealth of pre-defined shortcuts for popular streaming services such as Mixer, Twitch and YouTube are a genuine attraction to budding creators. The need for, say, an external Stream Deck Mini has certainly diminished, and we wonder if Corsair will eventually bring dedicated OLED buttons to future keyboards?