The recent Intel 10th Gen Core launch brings with it renewed focus for the desktop. Trouble is, anyone wanting to indulge themselves with a shiny Intel build needs to invest in a 400-series chipset-based motherboard. There's plenty of choice for punters, mind, with B460, H410, H470, Q470, W480 and, of course, Z490 available from big-name partners.

Z490 is the motherboard destination most apt for a premium 10th Gen Core chip because it has faster official memory support, optional 2.5G Ethernet, and WiFi 6 AX201 wireless over and above the Z390 (which you can't use with these chips, anyway). With most now eschewing multi-GPU setups and so much integrated into chipsets, there's real reason to consider smaller motherboards. Picking up on this thread is MSI with its Mini-ITX MEG Z490I Unify. 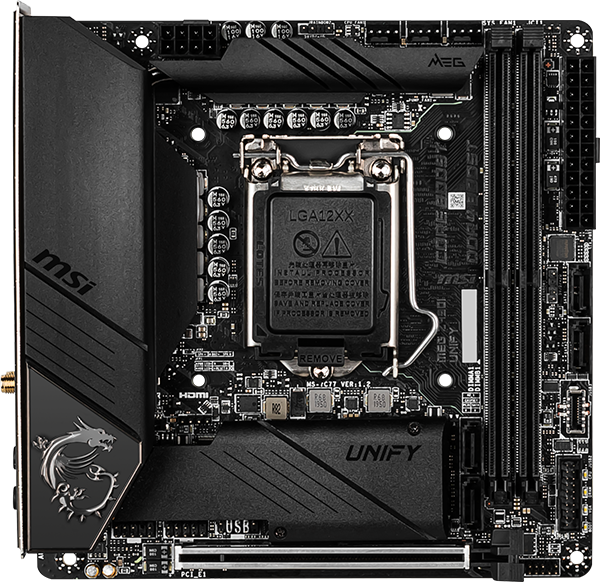 There's a regular ATX version of this board, too, but this pint-sized model is the only Mini-ITX in MSI's Z490 arsenal. Part of the performance MEG range, it's mercifully free of RGB lighting. The black-and-silver colour scheme works well together and is neutral enough to not draw undue attention inside a minimalist build.

Power is sourced through a 9-phase VRM supply that's more than meaty enough to handle a solid Core i9-10900K overclock. In particular, there's an Intersil ISL69269 PWM controller and ISL99390 power stages, each supporting up to 90A, underneath the cooling on the top-left of the board. It's more robust than it first appears, as there's a heatpipe connecting the metal MEG heatsink with the one integrated into the I/O shield. And given the lack of room MSI has to work with, there's a small fan in this section, too.

MSI cools the first M.2 slot with the Unify heatsink whilst the second, on the back, is left uncooled. Both run off the PCH at PCIe 3.0 x4 speeds, though do be aware the use of the rear M.2 disables one of the four SATA ports. No big deal in our eyes as we'd much rather have dual M.2 drives instead. 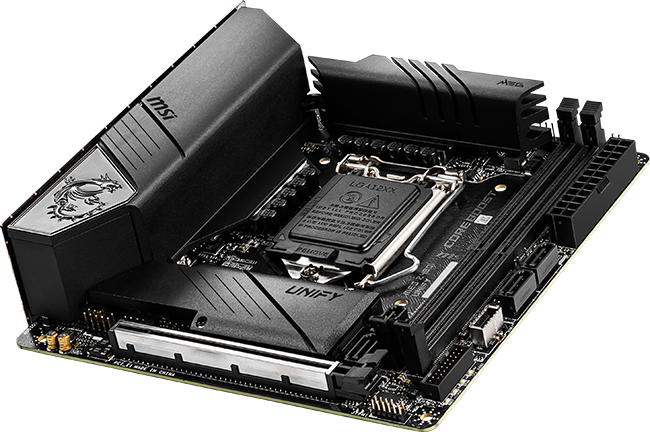 MSI is sensible in a couple of further ways. There's a front-panel USB Type-C header (10Gbps) for the latest chassis and integrated Thunderbolt 3 via an Intel JHL7540 chip. Both are handy for such a small board. Those wanting RGB goodness can still use the two JRAINBOW addressable connectors at the top and side.

We're not surprised to see a lack of onboard buttons here for the usual overclocking troubleshooting, due to a distinct lack of space on the 10-layer PCB, but MSI still includes four debug LEDs just to the right of the secondary front-panel connector. The troubleshooting is rudimentary as they only light up if there's an obvious problem with the CPU, DRAM, VGA or general boot.

The solitary graphics slot is strengthened and offers PCIe 4.0 support for upcoming processors. Its positioning is such that you can still easily get to the M.2 drive with a graphics card in situ, and depending upon CPU cooler used, there's reasonable airflow across the entire PCB. The three 4-pin fan headers - CPU, AIO, system - are all located in one section above the MEG heatsink.

That word sensible keeps cropping up as we discuss the layout and features. HDMI and DisplayPort make implicit sense for Intel chips used on a Mini-ITX solution, there's 802.11ax WiFi6 from the chipset, the USB Type-C offers 10Gbps as well as Thunderbolt 3 (40Gbps) support, the red Type-A port above is also 10Gbps, and there's 2.5G Ethernet from Realtek. Being critical, the only thing missing is 20Gbps USB. The venting space for the aforementioned fan takes up a chunk of I/O real estate which could have been used to house something else - more USB, perhaps?

The firmware, meanwhile, is solid as it uses the latest Click BIOS 5 as a base. We still don't like that one needs to reboot to flash the BIOS (M-Flash). It's simple to set the various fan curves in the hardware monitor section - and this is how you can effectively silence the VRM fan by having a flat line - but it's odd that the CPU fan speed is shown as zero: it's clearly spinning.

By default, the firmware pushes a Core i9-10900K to an all-core 4.8GHz over extended load, which has the effect of pushing the long-term TDP way higher than 125W. This behaviour, however, is common on all Z490 boards, and the Unify actually does a good job at keeping power in check when compared to the competition. It boosts the chip to 5.3GHz under light load, too, exactly matching the frequency characteristics of the full-ATX MSI MPG Z490 Gaming Carbon WiFi.

Priced at around £250, the MSI MEG Z490I Unify is financially competitive against similar solutions such as the RGB-infused Aorus Ultra and cheaper than the Asus ROG Strix Z490-I Gaming. Looking good so far, let's now see how it performs.