Intel 10th Gen Core CPUs have arrived at retail. Now offering up to 10 cores and 20 threads for Core i9, there's also hyperthreading across the entire stack. Entry into this club requires a new motherboard due to a change in socket from LGA 1151v2 to LGA 1200.

Though painful for those looking to upgrade, LGA 1200 ought to stay a while because it looks likely to be home for the next-generation Rocket Lake and Ice Lake CPUs. This is why picking out the best board for your budget is so important. 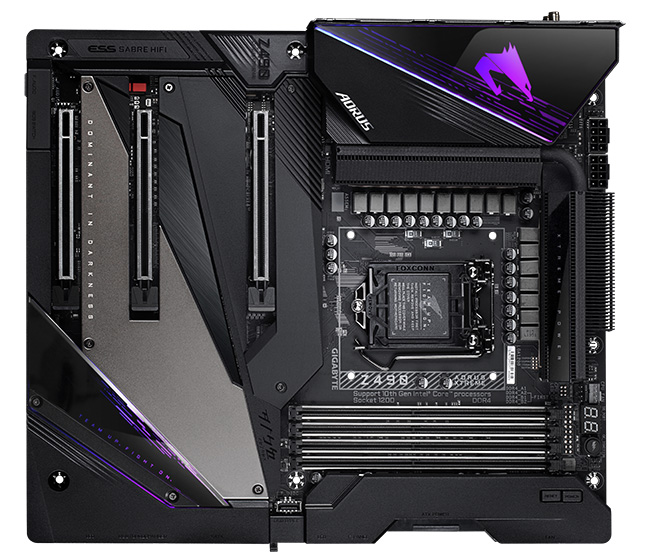 Aorus is the enthusiast arm of Gigabyte, and the Z490 Xtreme is the highest-specified board for anyone not requiring explicit watercooling - there's the Xtreme WaterForce model for that. Previously reviewed Xtreme boards have had a distinctive, minimalist look evidenced by almost board-wide cooling, rotated ports, and restrained RGB. This, unmistakably, is an Xtreme, and it looks really good in the flesh.

Don't bother if you aren't a) pairing it with a Core i9 CPU and b) plan to overclock heavily. The eATX board carries on the tradition of rotated ports and fan-headers, which we very much like, massive cooling around the chipset and M.2 slots, and provision for muted RGB in a couple of areas.

Aorus uses an eight-phase (Intersil 69269) digital PWM controller (Intersil 6617A) that has doublers to get to that 16-phase (Intersil ISL99390) capacity. MSI is the other firm that uses this arrangement on its top-tier boards. Doublers offer better load balancing between phases leading to higher power-design efficiency, according to the company. 90A per stage translates to board power that's far in excess of anything a 10th Gen CPU can handle - so your chip will give out well before the board does. It's interesting to note that only the Xtreme and Master feature this arrangement; boards further down the range have 12 phases connected directly to the CPU instead.

An 8mm heatpipe is embedded directly into the two heatsinks on top of the VRMs. There's no active cooling here, as you sometimes see on TRX40 boards, but as you will understand later on, temperatures are excellent under load. One ought to expect high memory speeds, too, as the board features shielded routing between strengthened DIMM slots and CPU. 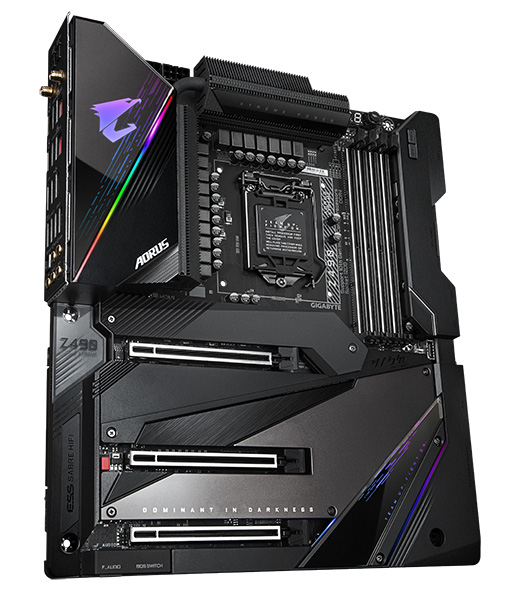 Some may argue that it doesn't carry the same level of OLED goodness as the top-end Asus and MSI boards, which is true, and we reckon that Aorus ought to implement such a feature here; it's something that stands out. In keeping with tradition, Xtreme features a large brace/heatsink on the back, pushing weight up to an impressive 2,160g. This really is a beast. Dual BIOSes, loads of fan headers - rotated, of course - onboard buttons and voltage-monitoring points are all present and accounted for.

Underneath that huge central heatsink reside the board's three M.2 slots. The top one, just above the primary x16, is connected to the CPU at PCIe 3.0 x4, and we suggest you use this if only running one drive. The bottom two, between the two lower x16 slots, both attach to the PCH (or southbridge). As usual, the limited bandwidth between PCH and CPU, which remains DMI 3.0, means there's a fair bit of switching depending upon how the board is populated. This is not Aorus' fault; it's Intel's.

For example, the primary PCH M.2 shares bandwidth with SATA ports 3, 4 and 5 - so it's one or the other. Similarly, contention arises between Ethernet and the bottom PCIe slot, which is run at x4. In fact, all the contentions that existed on Z390 are exposed here fully, putting the chipset well behind AMD's X570 for multi-peripheral use. This is also why Aorus refrains from adding M.2 expanders - the Z490 isn't up to it.

Looking towards the future, the top M.2 slot is able to run at PCIe 4.0 electrically, as are the two uppermost PCIe x16. It's also good to see that all M.2s cool drives with double-sided NAND. It's also useful that the uppermost M.2 cooling solution comes away on its own, rather than be part of a larger heatsink. This means you don't need to remove the graphics card if changing out drives.

We like that the Xtreme features 10G Ethernet from Aquantia alongside a 2.5G from Intel's Foxville stable. Aorus also adopts Thunderbolt 3 on the two Type-C connectors (which also support USB 3.2 Gen 2), though exactly how much bandwidth you'll be able to achieve is, once again, significantly dependent upon how the board is setup. Audio is top-notch thanks to the combination of ESS Sabre DAC and ALC1220 codec, and Aorus goes a step further by bundling in a USB Type-C-to-3.5mm DAC that replaces the traditional 3.5mm jack on your case's front panel. The premise is to enable the same sound quality from the front (assuming it has Type-C) as from the I/O section.

About the only connectivity trick the board is missing is USB 3.2 Gen 2 2x2 (20Gbps) support. That really ought to be present on a board of this ilk, though Aorus may argue that having dual TB3 more than makes up for it. There's also no RGB Fan Commander module in the box, unlike the X570 version. Closer perusal of this offering and its immediate predecessor, Z390 Xtreme, reveals there isn't much new in the transition between models. That makes sense, of course, as Aorus is effectively transplanting from one chipset to another that is practically identical save for new CPU support.

That said, it looks better than the board it replaces as mainstream head honcho, adhering to the new Aorus style of massive cooling, restrained RGB and fully-angled connectors.