Announced at the turn of the year at CES, AMD put plenty of meat on the bones of its Ryzen Mobile 4000 processors last week. Codenamed Renoir, these chips use the latest Zen 2 architecture and 7nm manufacturing to accommodate up to eight CPU cores and 16 threads for muscular performance. Tacked on to each processor is Radeon Vega graphics pulled from the last generation.

Catering for the diverse laptop market, AMD's releasing five 15W U-series chips alongside six 45W H-series for high-performance laptops touting dedicated graphics. Such a range strikes at the heart of rival Intel's offerings that populate the same form factors and power requirements. This is AMD bringing its heavy-artillery firepower to the mobile space. 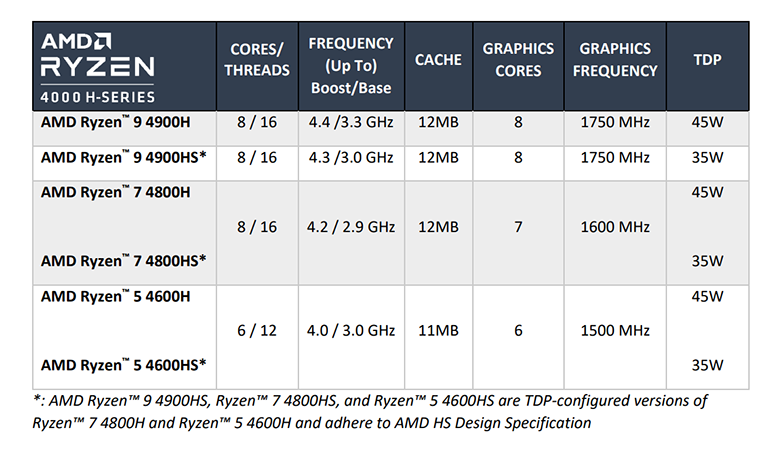 And it's the H-series that are interesting insofar as there are three HS series that run with a lower 35W TDP and are installed in select laptops that adhere to a stricter design standard mandated by AMD and collaboratively worked on by the manufacturer. Consider these the creme de la creme, offering the best balance between performance, battery life and form factor.

The two slower HS chips offer identical frequencies to their non-HS counterparts, while the best of the lot, Ryzen 9 4900HS, is only 100MHz slower than the regular H. If it were us choosing a thin-and-light gaming laptop powered by AMD Renoir, the 4900HS would be at the top of the shopping list.

This exposition segues nicely to the laptop in for review today. Asus has been a lead Ryzen Mobile 4000 series partner and announced the ROG Zephyrus G14 also during CES. Kitted out with an HS processor and GeForce RTX 2060 MaxQ GPU, the 14in laptop fits firmly into the ultra-slim gaming range by dint of its 14in screen, 18mm height, and 1.6kg weight. With promise of class-leading CPU chutzpah and solid gaming credentials, touted as the world's fastest in this form factor, let's take a closer look. 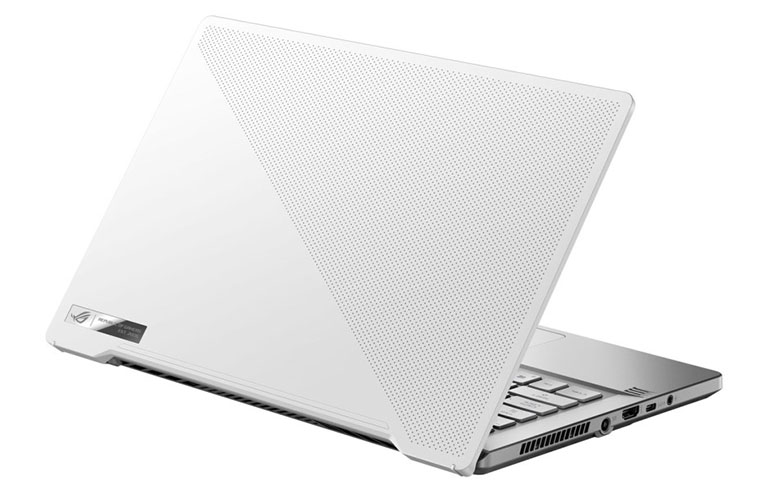 As usual, there are multiple versions available. Key amongst the differences is colour scheme: either all-grey or grey with a white back and bottom. The rear deserves a mention as the diagonal dotted pattern is a nice departure from the usual garish graphics associated with gaming laptops. One of the key standouts is the optional AniMe Matrix LED display on certain models. The 1,215 white mini-LEDs, with 256 levels of brightness, can be customised, controlled for unique animated and stationary designs, or even visualisations that react to music and sounds. They look good but certainly won't be a boon for battery life.

Another choice impacting battery life directly is the screen, with Asus offering IPS panels featuring 1080p60, 1080p120 and 1440p60, with the latter duo supporting adaptive sync. Given that an RTX 2060 Max Q is at the helm. all three make sense depending upon the in-game quality levels.

Build quality is solid throughout. Asus uses a metal frame that's indented around the chiclet keys. Torsional strength is good, with no obvious flex, and even the trackpad area is immune from buckling under hamfisted load. Zephyrus G14's height is listed as 18mm, but like the larger Zephyrus, tilting the screen back more than 90° activates a hinge that intentionally raises the keyboard section up by 7mm depending upon the severity of the angle. The two benefits are increased airflow opportunity for copious number of vents around the edges and on the bottom, plus arguably a more natural typing angle. The mechanism is fluid and intuitive, though there is a noticeable increase in fan noise - more on that later. 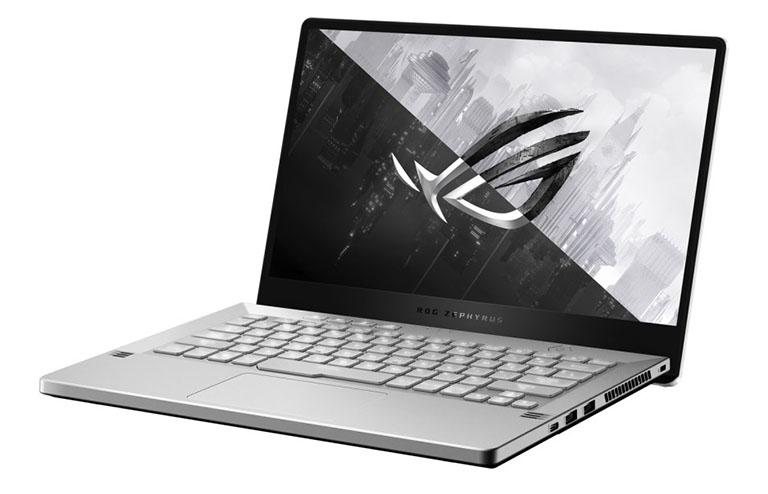 Notwithstanding the thin bezels around the top and sides, Asus' decision not to integrate a webcam continues to befuddle because there's ample space for a Dell-esque up-your-nose version by the keyboard. There's an option to purchase a 1080p60 model separately, though. Asus moves Windows Hello login over to a fingerprint reader integrated into the power button and lines the upper-left with four shortcut keys.

Feelings on the island-style, backlit keyboard are mixed. Coming from a Microsoft Surface Laptop 2 as a daily driver, the G14's feel wide and less responsive. The trackpad, meanwhile, is better, offering precise, smooth movements without excessive force.

Housing a 35W CPU and discrete GPU in a slim chassis brings cooling to the fore. The G14's internal fans are on almost all of the time, blowing a steady stream primarily out of the two large vents on either side. We're not sure why they're needed when playing video on the battery, and while the noise isn't obtrusive in light-load scenarios, the entire frame vibrates like a mechanical 2.5in drive, meaning you feel it in the palms when resting your hands in the typing position. It's rather off-putting. Speakers on either edge do a robust job of outputting a decent level of sound.

Our sample specification is on the premium end of the Zephyrus' options. The Ryzen 9 4900HS is the natural star of the show, supported by 16GB of DDR4-3200 memory, a 1TB Intel 660p NVMe drive (run at only PCIe 3.0 x2, strangely), and an adaptive-framerate 1080p120 display powered by the GeForce RTX 2060 MaxQ GPU. That's a sensible assortment of components inside a tidy package aimed primarily at the ultra-portable gaming crowd.

Asus uses a 14in non-touch IPS panel from Sharp whose matte coating is great for minimising reflections but does little for vibrancy and punch. Windows works well enough with either 100 or 125 percent DPI scaling, while the choice of panel will play well with respect to battery life on the 76Wh unit. 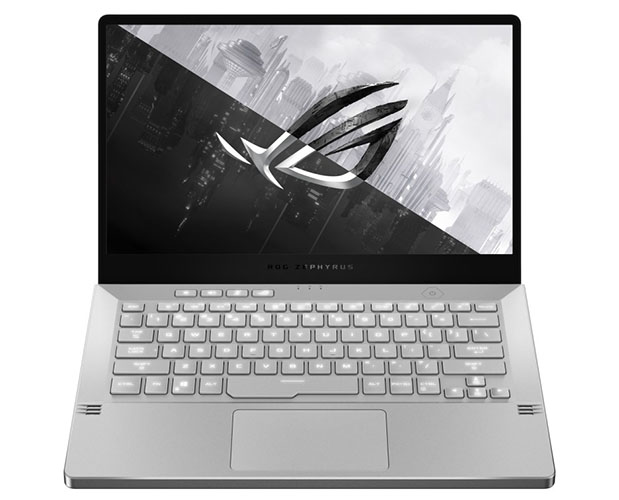 Gamers will need to plug in the large, flat power brick rated at 180W rather than rely on PD support. The power jack is large and, frankly, looks ugly compared to the rest of the magnesium-alloy frame. It's also a shame there's no fast charging on this model. A complete top-up takes just under three hours. Windows 10 is mostly free from annoying bloatware, too.

Priced at £1,799, which is about par for a laptop of this specification, let's now see how it performs against its peers.