Nvidia is today releasing another desktop graphics card armed with the latest Ampere architecture. GeForce RTX 3060 is the name, GA106 is the die, and providing smooth gameplay at FHD and QHD with moderate ray tracing is the aim.

In a turn of events, the mobile variant going by the same name has been released earlier, underscoring Nvidia's priority when stock shortages remain on the sharp end of acute.

Even so, a new desktop gaming GPU provides another opportunity to wield the ever-increasing specification table, so let's take a look.

A few points to consider. Unlike its immediate bigger brothers, RTX 3070 and RTX 3060 Ti, the newest GPU uses a specific, smaller die known as GA106. Though still built by Samsung on the 8nm process common across all desktop Ampere chips, GA106 shoehorns 'only' 12bn transistors and takes up 276mm² of die space. Makes sense going down this route, too, as the meatier GA104 blueprint is clear overkill for what is an upper mid-range GPU. 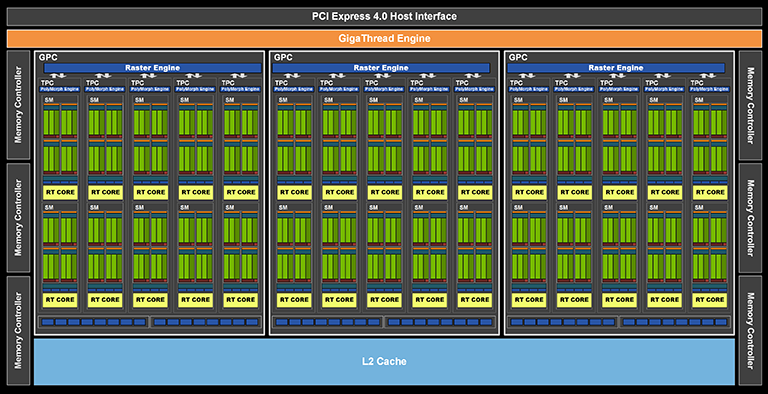 Here is GA106 represented in a high-level overview. As Nvidia has typically done before, a particular GPU doesn't necessarily take full advantage of the complete die it is based upon. GA106, as shown above, comprises 30 Streaming Multiprocessors (SMs) arranged across three GPCs. Each SM is home to 128 shaders, meaning 3,840 in total, which can all be set to FP32 if the application demands it.

GeForce RTX 3060, however, has a total of 28 SMs, leading to 3,584 shaders, so this desktop chip makes use of 93.33 per cent (28/30) of the die's intrinsic capability. It's logical to assume this 28 SM number was chosen as it represents a good trade-off between yields and where Nvidia wants the performance to be. The irony is that RTX 3060 Mobile uses the full die and 3,840 shaders.

Knowing desktop RTX 3060 has 3,584 shaders at its disposal enables simple calculation of potential throughput. We're looking at close to 13TFLOPs of FP32 based on the default boost speed of 1,777MHz. Certainly impressive for workloads that take full advantage of floating-point prowess, but don't for a minute consider this to be better than a GeForce RTX 2080 Ti for gaming, whose TFLOPs are noted to be about the same. The reason has to do with how Ampere allocates FP and INT datapaths, and you can read more about that here.

As SMs are the building blocks of Ampere, having fewer shaders also proportionally reduces the number of RT and Tensor cores compared to models higher up in the pecking order, leaving this card with 28 and 112, respectively.

Nvidia, however, mixes up the Ampere playbook with respect to the memory subsystem. Saving die space and power, memory width is cut to 192 bits, which is just about okay for a mainstream solution, but what's notable is Nvidia's decision to equip this GPU with 12GB of GDDR6 memory. Not only is there more of it than on even the high-performance RTX 3080, it's also run at an effective 15Gbps, making it, per bit, speedier than RTX 3070 and RTX 3060 Ti. And completing the comparisons, RTX 3060 Mobile has just 6GB. An interesting set of choices all round.

Having 12GB of VRAM on the entry-level Ampere desktop card is starkly at odds with the rest of the stack - Nvidia could have chosen 6GB or opted for mixed-density modules to get to either 8GB or 10GB. We can only surmise that rival AMD's 16GB on RX 6000 Series plays well from a marketing perspective where non-tech-savvy buyers consider more is plain better in every scenario. Perhaps we'll see RTX 3080 20GB and RTX 3070 16GB sooner rather than later.

Putting it all together, GeForce RTX 3060 12GB is plumbed with a total graphics power (TGP) of 170W. Expect to see a wide range of design and form factors from all and sundry. To that point, it's likely to be a huge relief to add-in board partners that Nvidia is not selling a Founders Edition that typically makes them look bad from build quality and pricing perspectives.

Pricing is practically meaningless when supply remains so constrained. Nvidia reckons partners will sell boards from $329 (£299), but good luck finding many, if any, in stock at that level when the out-of-stock RTX 3060 Ti boards are going for $800+ on popular auction sites.

Last but not least, it is worth knowing that Nvidia wants this card to be a gaming solution first and foremost. The recent price escalations of cryptocurrency have led many to purchase GeForces for mining. The green team says that 'RTX 3060 software drivers are designed to detect specific attributes of the Ethereum cryptocurrency mining algorithm, and limit the hash rate, or cryptocurrency mining efficiency, by around 50 percent.' Ouch.

Back-of-the-envelope calculations suggest GeForce RTX 3060 will benchmark at around 70 per cent of the Ti's levels. After this analysis we're confident it should still be great for FHD gaming and a solid bet for QHD. Let's now examine a Gigabyte card and then run the numbers.