The GeForce RTX 2080 Ti and RTX 2080 rolled into review town on Wednesday. Based on the all-new Turing blueprint and housing an eclectic mix of compute cores for traditional rasterisation, ray tracing and deep learning, these cards feature the most forward-looking architecture ever. Our results showed that while RTX 2080 was marginally faster than the last-gen GTX 1080 Ti in today's games, it had the ability to streak up to 50 per cent ahead when using its smart muscle to the fullest.

And Nvidia made the bold move of releasing its best-ever Founders Edition (FE) cards overclocked out of the box. The RTX 2080 model ships with a core boost speed of 1,800MHz, offering up 90MHz more speed than stock. Meanwhile, the well-constructed FE design is available for £749, which is cheaper than practically all aftermarket cards.

So not only do add-in board cards need to outperform the FE model, they also need to look great and be in the same financial ball park. Puts all these partners in a sticky situation, doesn't it? 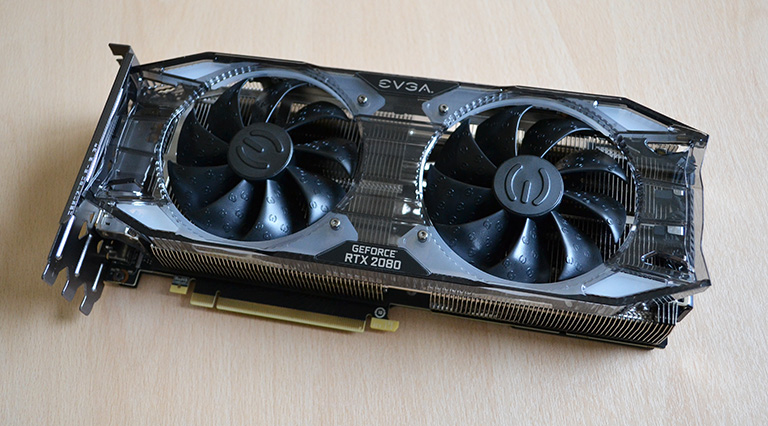 Such positioning headaches aren't bothering Nvidia stalwart EVGA. It has four GeForce RTX 2080 cards in its arsenal. Understanding the positioning requires some additional examination. The $750 XC Black Gaming uses the reference PCB but an all-new cooler on top, which we will talk about in a bit. Using a dual-slot form factor and measuring 269mm long, its boost clock is a relatively anaemic 1,740MHz. Spending an extra $50 brings the same-sized, same-cooled XC Gaming into view. The only meaningful difference is the engine clock is boosted to 1,800MHz, matching the Nvidia Founders Edition for speed and US price.

The third choice and card in for review today is the XC Ultra Gaming. Though the same width and height as the aforementioned duo, EVGA increases the heatsink bulk and extends the form factor to 2.75 slots. Heavy-duty cooling enables the card to up its core speed marginally, to a boost 1,815MHz, though you will have to pay the equivalent of $850 for the privilege.

Last but not least, pushing the boat out is the $900 FTW3 Ultra Gaming. Using a custom PCB that's bigger - 302mm long, 139mm high and the same 2.75 slots as the XC Ultra - EVGA is yet to finalise the core clock. We'd expect to see 1,850MHz at a minimum. It is the only card to feature dual BIOSes, too. Having differentiated on cooler and core speed, every EVGA RTX 2080 keeps memory speed at a standard 1,400MHz. 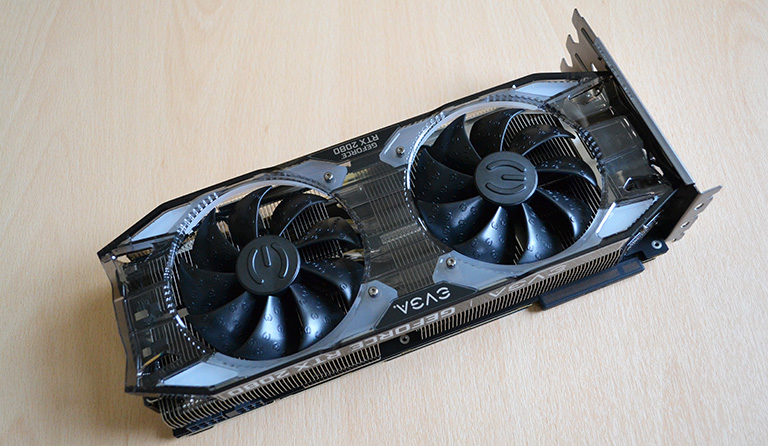 Coming back to the review card, the rather large XC Ultra, it's clear that EVGA is going with the bigger-is-better approach. Notice the milky-coloured plastic sections surrounding the fans? That's standard livery for the card, though you are able to customise to either red or black trim kits by registering your card with EVGA and getting them for free while stocks last - there are 2,000 of these kits available for the RTX 2080 Ti and RTX 2080.

Having a 2.75-slot form factor enables EVGA to use a taller heatsink-and-fan assembly than on the dual-slot models. The cooling is very substantial, most likely overkill for what is a 210W TDP card, and leaves the XC Ultra looking overtly brutish compared to the Founders Edition card.

The aluminium fins run about 80 per cent along the way of the PCB. The two heatsink sections are connected via six heatpipes - the central quartet are flattened - and the whole assembly sits on top of a near-PCB-wide plate that is in direct contact with the VRMs and memory chips underneath. It is of no surprise that this cooler is also used on the hotter-running Ti model. 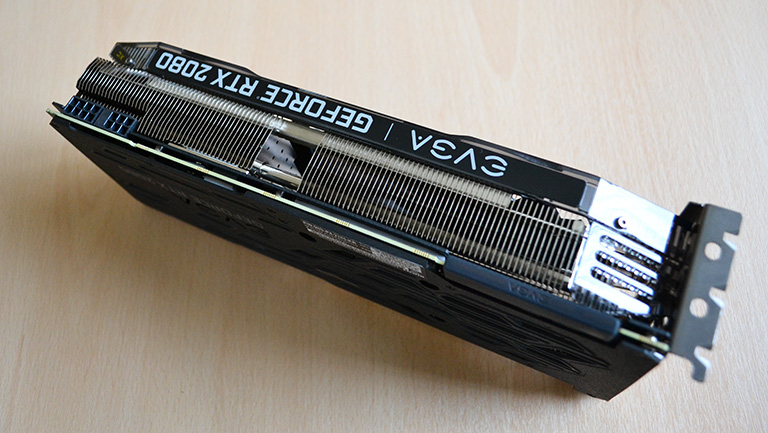 It's the first time EVGA uses hydro-dynamic bearing fans for, it claims, lower noise at load. As expected and unlike the FE card, the fans switch off at moderate load - the GPU needs to hit around 55°C before they bother spinning up, going by our tests. Overall build quality is robust, and it needs to be on a card weighing 1,261g, which is about the same as the FE.

Above is a better view of those numerous tall aluminium fins. The entire card's name is backlit with RGB LEDs controllable by a subsection in the EVGA Precision X1 software. You can alter the colour, obviously, but also control the LED brightness and, if using the breathing mode, define the speed of change.

It's a shame that not more of the card gets the RGB treatment, if you are into that kind of thing, because this sliver of lighting looks somewhat out of place on a GPU of this heft. Should you wish, the lighting can be turned off altogether, too. 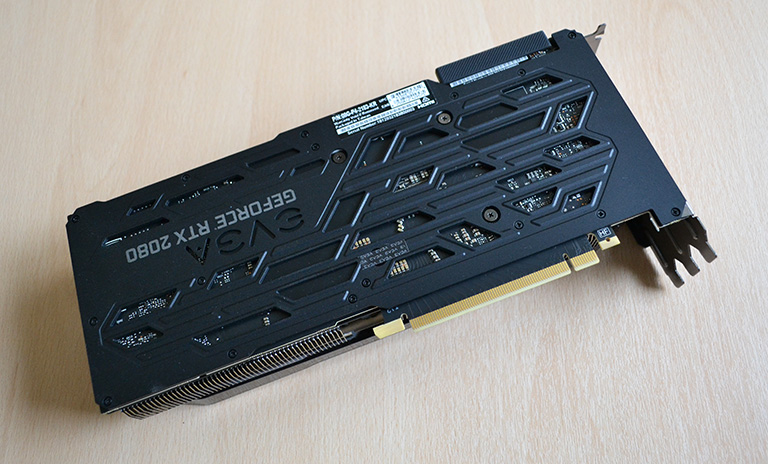 As the underlying PCB is reference insofar as it is largely a copy of the FE's, the XC Ultra uses standard 8+6-pin power delivery, so everything applicable to that card - power phases, TDP, etc. - is also valid here. What this really means is that EVGA will have a tough time differentiating its performance from the Nvidia's model.

Keeping such a big card rigid enough requires a custom frame on the back that feels plasticky compared to the thick metal present on Nvidia's reference card. Sensibly, there are thermal pads between it and some of the components on the rear. Nvidia's rather chunky NVLink is in clear evidence top-right, as well.

Though such observations are personal, the Founders Edition feels like more of a premium product thanks to its all-round aluminium coverage and attractive industrial design. It's horses for courses, we guess, and a couple of potential downsides of the FE are a lack of RGB bling, if that's your thing, and always-on fans. 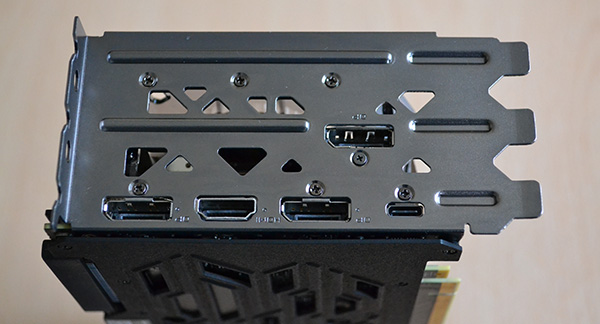 Over the pond the premium for this card is $50 over the Nvidia Founders Edition. Over here in the UK the price difference is at least £100 - £850 vs. £750 - so the question is how does EVGA justify it. Let's take a look at the benchmarks before making up our mind.