The release of AMD's Zen 3-powered Ryzen 5000 Series desktop processors is important as they represent, for the first time in well over a decade, CPUs with no obvious weaknesses compared to rival Intel Core. At least as good in gaming, better for multithreaded applications and using forward-looking PCIe 4.0 to boot, it's easy to recommend Ryzen for your next performance build.

Music to AMD's ears, no doubt, but while our launch-day article focused on the premium Ryzen 9 5950X and Ryzen 9 5900X, many readers are more interested in the other two 5000 Series chips arriving at more amenable price points. Enter the Ryzen 7 5800X and Ryzen 5 5600X.

If you haven't done so already, it's well worth investing time in reading the architecture that makes Zen 3 so good.

Getting straight to the nub of the matter, Ryzen 7 5800X uses a single CCD die housing the full complement of eight cores and 16 threads. Under the revised layout, each core has access to the full 32MB of L3 cache, helping push performance across the board. The CPU complex is tied to the IOD chip - housing the memory controllers, amongst other things - via Infinity Fabric. Like Zen 2, the two chips communicate at 32-byte read and 16-byte write, per clock cycle. This is why you will see half-speed writes on the memory analysis page.

AMD is aiming for high frequencies with this part. We know this because it retains a 105W TDP, which is the same as the 12- and 16-core models imbued with much greater core horsepower. AMD says it promises a worst-case 3.8GHz frequency and a maximum of 4.7GHz. The all-core speed, important for rendering, sits between the two, most likely at the higher end of the scale.

A couple further points. AMD does not bundle a cooler with this processor, unlike the previous-generation Ryzen 7 3800X, though in fairness, the later 3800XT also eschews in-the-box cooling. Secondly, this eight-core chip arrives at retail for £420, assuming you can find it in stock, whereas the older 3800XT is £350. Lastly, for now, Ryzen 5000 Series goodness is tied to 500 Series chipsets; anyone with a 400 Series board needs to wait until the new year. 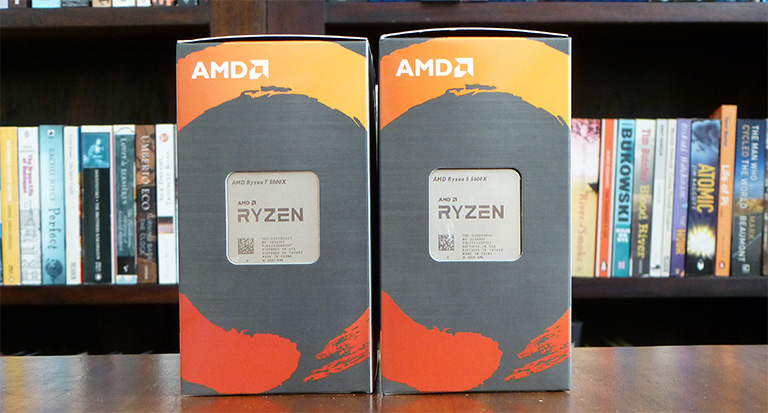 Making pricing matters trickier, the processor is the same price as the 8C16T Ryzen 7 3700X with which it shares the 65W TDP. Do you go for an older architecture with more cores, or for a newer one with more IPC? Or do you lay similar cash down on an 8C16T Core i7-10700? Decisions, decisions.

Investigating pricing in $50 bands shows how Ryzens stack up against Core equivalents. Truth be told, there's no bad chip on either side, and while Intel has had bad press of late, 10th Gen Core remains a solid proposition for anything other than a monster rendering build.

It's also worth knowing that Ryzen 5 5600X is not part of the AMD Far Cry 6 promotion and that, at the time of writing, stock remains scarce on the ground for both of these review 5000 Series chips.