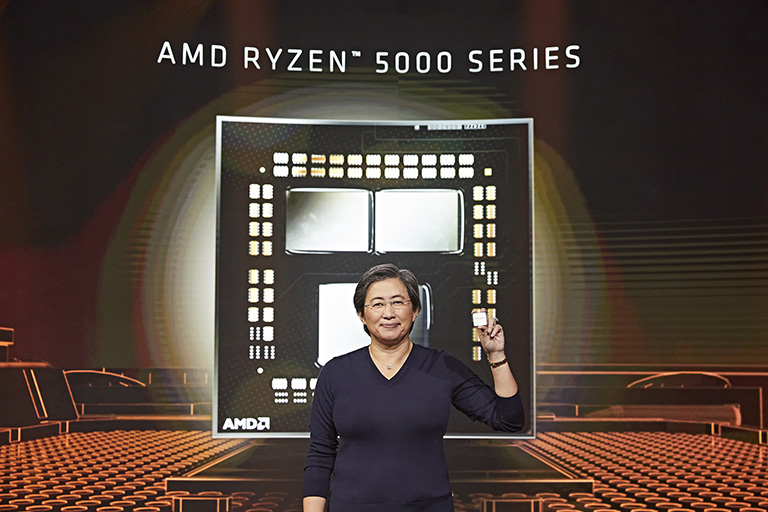 Most of AMD's recent resurgence can be directly attributed to the success of the Zen CPU microarchitecture that's now successfully ensconced in mobile, desktop and server processors.

Clean-sheet Zen arrived in March 2017, a second-generation design grabbed much of the low-hanging architecture fruit in April 2018, while third-gen heralded deeper architecture refinements and a doubling of mainstream cores in July 2019.

It is instructive to consider the improvements AMD's engineers have made in the move from capable Zen 2 to Zen 3. Such grounding provides context for understanding benchmark performance on subsequent pages. 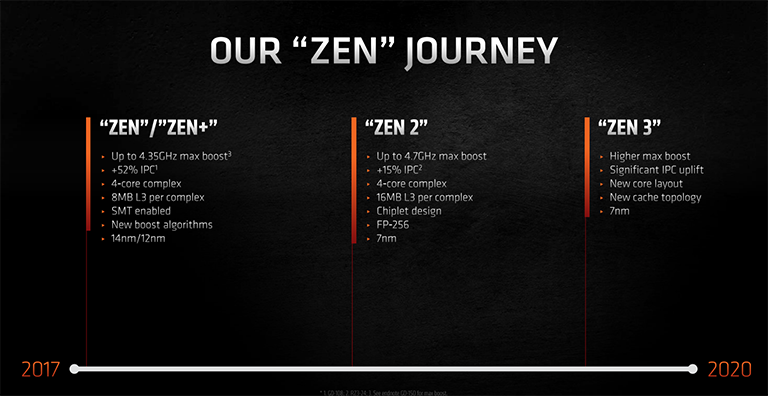 This AMD slide neatly summarising key improvements for Zen 3. Mixing architecture and models for a brief moment, it is important to temper overall expectations by appreciating that Zen 3 retains the same core-and-thread topology as Zen 2. You are not going to see a doubling of compute resources and improved architecture in one fell swoop. Zen 2 set the overall bar high; Zen 3 gives it a healthy bump upwards. This means the best mainstream processor continues to wield 16 cores and 32 threads. Ryzen Threadripper is the port of call for higher core counts.

With that out of the way, the aim of Zen 3, according to AMD, is to lift both instructions per clock (IPC) and frequency over Zen 2... without changing manufacturing process or adding socket power for the long-standing AM4 platform.

Through changes we'll detail below, AMD says it has achieved a 19 percent IPC uplift over Zen 2 based on a geomean of 25 common workloads. IPC is agnostic of frequency, meaning gains emanate from 'hard-nosed' architecture improvements alone.

Putting this into context, you may recall that Zen 2 achieved a 13 percent IPC uplift over Zen+ and 16 percent over original Zen. AMD promises more in a shorter timeframe.

Without fundamentally changing core architecture, increasing IPC - defined as the total amount of work done per clock cycle - from one generation to the next is a case of looking at how the present design can be made both more efficient and powerful. A tough ask when Zen 2 is already pretty robust, made even more difficult by AMD refusing to budge on TDPs.

Modern CPU architecture is split into three areas known as front-end, execution and, to a lesser extent, load-store. The front-end feeds the beast and any efficiencies gained here are magnified further down the pipe. Zen 3 does a few things better. The Tage branch predictor is faster at working out the optimal flow of instructions through the machine and better at recovering from mispredicts that stall the engine and require precious time to be flushed out. Think of a really good front-end as a clever management system that intelligently reduces queues, predicts roadblocks, and keeps traffic moving along at a high average pace. 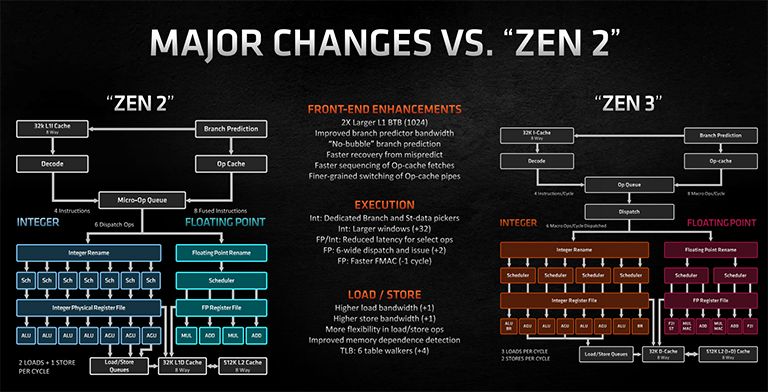 AMD says it has also optimised caches (they remain the same size) enabling faster switching and improved prefetching. Standard fare between generations. Improving the front-end pays real dividends if the bulk of the architecture, the execution engine, can handle more work efficiently. Zen 3 still employs six-ops-per-cycle throughput, but in the name of improving integer performance, this brown-coloured section does more than on Zen 2.

Though still keeping to the four ALUs and three AGUs of the previous design - considered the building blocks of CPU performance - Zen 3 gives these units considerably more bandwidth by beefing up the connected load/store units used to move data from memory and registers. It's arguably this feature that does most to turbocharge Zen 3 by enabling more instruction-level parallelism. Over to the right, the floating-point execution gains larger schedulers and more dispatch bandwidth (6 vs. 4) via two new store units.

Summing up, Zen 3 builds on its predecessor by increasing both architecture efficiency and usable internal bandwidth. Higher peak utilisation of the cores in modern workloads provides Zen 3 the capability to do more every cycle. Every application benefits from being run on Zen 3 over Zen 2, but just how the cleaner front-end, improved integer and floating-point execution, and additional load/store resource interact with one another determines the actual level of gain. It's certainly no coincidence, however, that Zen 3's performance-enhancing attributes play well with applications that focus on single-thread performance. 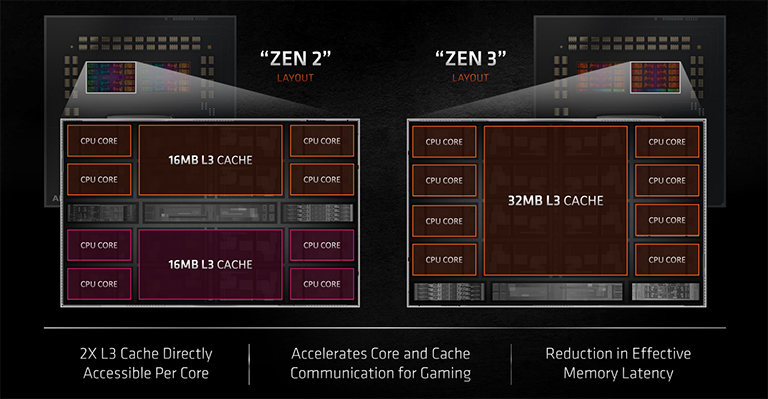 The above slide takes in an even higher-level overview of Zen 2 (left) and Zen 3 (right). Outside of microarchitecture, the way in which the execution engines interface with various strata of memory has also been a profitable source for picking off easy performance gains.

Looking at an eight-core block, Zen 2 uses two four-core CCXes that each have access to their internal L1/L2 cache and external pool of L3 memory. These CCXes are tied together to form an eight-core CCD. It's clear this is a less-than-optimal strategy, so Zen 3 gets rid of CCXes and replaces them with a monolithic CCD where each core has access to a full 32MB of L3 cache. Overall cache doesn't change, of course, but the way in which cores access them does.

The upshot from this approach is simple to predict. There's less potential core-to-core and core-to-cache latency. Makes sense as the CPU cores don't need to jump through extra layers of fabric for communication with cache that's not part of their regular pool.

In particular, this cleaner caching arrangement and gateway to a double-sized L3 pool is a definite boon to applications such as gaming, where a couple of threads dominate accesses and have hither-to been limited by relatively high latencies.

As before, the 7nm cores use Infinity Fabric to connect to a separate 12nm IOD block which contains the memory controller and a general I/O hub. This is why you will see three distinct chiplets on 12- and 16-core chips - two CCDs and a single IOD. Eight-core models ought to carry two. Do understand that on single-CCD models - eight cores and below - AMD retains the 32-byte read and 16-byte write, per clock cycle, along the Infinity Fabric conduit, leading to half-speed writes.

There's no mention of any baked-in support for accelerating AI tasks, unlike Intel, and it's clear AMD concerns are more on improving single-thread and gaming performance this generation.

AMD taps up foundry partner TSMC for the same 7nm process as used on Zen 2. The exact recipe is tweaked to offer a more amenable voltage/frequency curve where the processors stay resident at higher speeds for more of the time. You can also read that statement as AMD offering higher frequencies without requiring extra power, so let's see how the quartet of announced Ryzen 5000 Series processors line up against their incumbents.

The new processors are emboldened across the specs. Though obvious, AMD skips the 4000 Series desktop branding due to any potential conflicts with mobile parts bearing the same name. Ryzen 5000 Series is based solely on Zen 3 goodness.

One first aspect that ought to jump out is AMD's launching the 16C32T Ryzen 9 5950X champion chip at the same time as the 12/8/6-core models. That's in contrast to the staggered approach last time around, where the beefiest processor came later.

There's not too much to say here other than peak frequencies are a little higher than the equivalent Ryzen 3000 Series parts. It's also telling that, for now, AMD has dropped the T suffix, indicating there ought to be still-faster 5000 Series processors down the line.

Compared to similar chips in the arsenal, AMD tacks on an extra $50 for each processor, arguing the gains in IPC and frequency maintain Ryzen's bang-for-buck advantage. That's true enough, as you will see later, yet as is the case whenever one family is introduced, the older models' price generally drops. As a point of reference, the Ryzen 9 3900XT can be purchased for as little as $430, putting value pressure on faster Ryzen 9 5900X out of the gate.

That premium particularly hurts the Ryzen 5 5600X, as $50 represents a 20 percent jump on SRP, or more when any older model discounting is taken into account. Builders using these kinds of chips are naturally more sensitive to higher costs, but may be assuaged by its restrained 65W TDP. It's also the only 5000 Series chip to ship with a cooler in the box, though the bundled Wraith Stealth is a step down from the Wraith Spire v2 present in the Ryzen 5 3600XT package.

Understanding the real-world performance impact of frequency and IPC is not readily discernible from specs alone. Ryzen 9 5900X is claimed to be, for now, the 'world's fastest gaming processor' relegating the Core i9-10900K to erstwhile champ status when evaluated over 10 games at the CPU-sensitive FHD resolution. You'll see our own testing mirrors the projections.

Based on the existing AM4 form factor, Ryzen 5000 Series will work on 500-series chipsets (X570 and B550) through a BIOS update incorporating AGESA 1.0.8.0. AMD says it has been working with the major motherboard partners to ensure all prominent models have the appropriate BIOS support in time for launch. 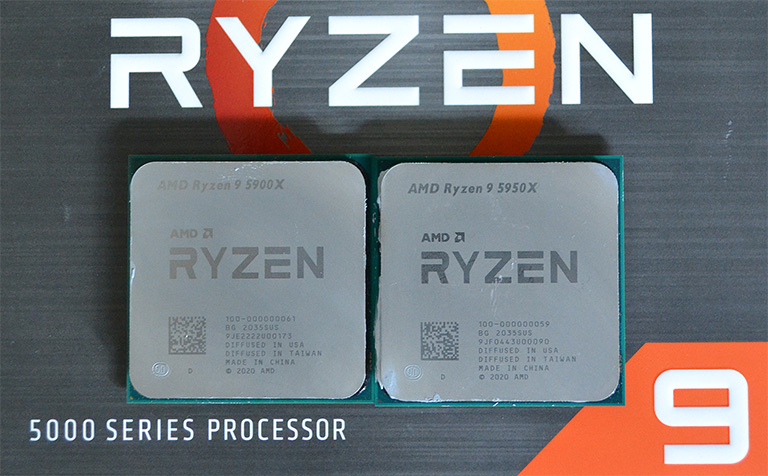 Those with older 400-series chipset-based motherboards have to wait longer, until at least January next year. AMD is clearly pushing users to the latest 500 Series chipsets. Makes sense, too, as they expose PCIe 4.0 support in its fullest form.

Improved IPC, more efficient external caching, and higher frequencies are the three major hallmarks of Zen 3 when presented in desktop Ryzen 5000 Series form. Our launch review focusses on the 16C32T Ryzen 9 5950X and 12C24T Ryzen 9 5900X, so let's hop to it.