When Corsair announced a new range of CPU coolers at CES earlier this month, we fully expected a few more additions to its thriving portfolio of all-in-ones, but the new air-cooled A500? Well, that came as a pleasant surprise.

It has been almost a decade since Corsair last dabbled with air CPU coolers - bonus points for those of you who still remember the A50 - however we feel it's important for the firm's fan base to be able to choose their preferred cooling method, and if you shy away from liquid, the A500 is marketed as "a truly high-end air cooler deserving of the Corsair name." 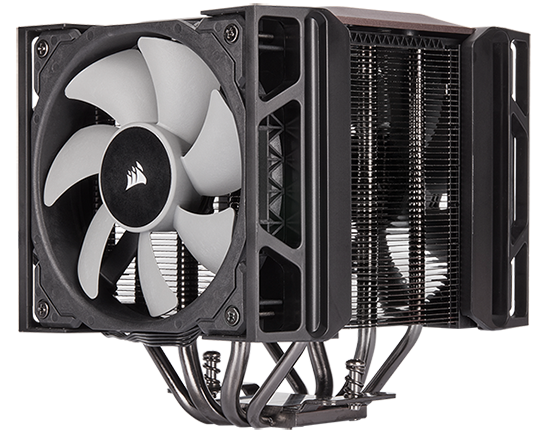 Aimed squarely at the enthusiast end of the market, the A500 comes to retail carrying a £90 price tag. That's £10 more than revered competitors such as the Noctua NH-D15 or Deepcool Assassin III, and almost £20 more than a tried-and-trusted be-quiet! Dark Rock Pro 4. Expectations, therefore, are through the roof.

First impressions are favourable. Corsair's packaging is secure and tidy, the product is backed by a five-year warranty as standard, and the bundle includes a spare tube of XTM50 thermal paste, a handy screwdriver and fixings for the majority of current Intel and AMD sockets. The only exception is AMD Ryzen Threadripper, and for the record, while Corsair reckons the A500 can cool CPUs with a TDP of up to 250W, it is keen to point out that "liquid cooling solutions provide the best user experience with Threadripper processors."

There's only so much you can do in terms of appearance when working with a giant heatsink and dual fans, yet in situ Corsair's A500 looks a tidy piece of kit. The removable, brushed-effect plastic lid is a neat topping, and to our astonishment, there are no LED lights. It is becoming increasingly rare to see high-end CPU coolers without RGB effects, yet in our opinion the A500 is all the better for it; there are no lighting cables to contend with, and you don't need any superfluous software.

Installation happens to be a doddle, too, with Corsair using a format familiar with many coolers in this category. On our Intel LGA1151 socket it's a classic case of fixing mounting brackets to a backplate using the supplied standoffs, then attaching the cooler via the two screws accessed by removing the top cover. The entire process takes no more than a few minutes, and for newcomers there's a video tutorial to walk you through the process. Thermal paste is pre-applied in a checkered pattern for supposedly optimised spreading, and there's enough in the spare tube to cover a handful of reinstalls. 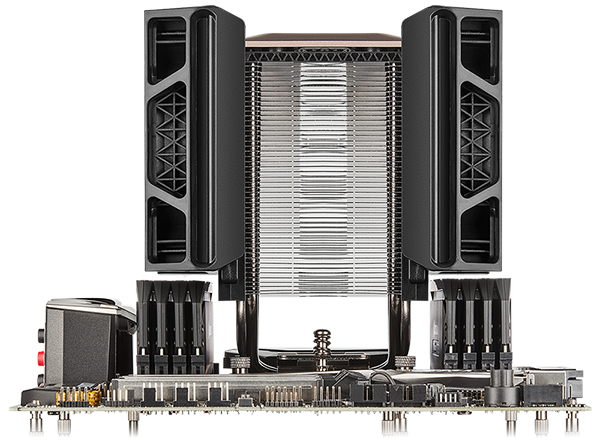 So far so good, and what we really like is Corsair's clever ratcheted rail system, whereby the fans can be raised or removed without having to faff with awkward and unsightly clips. The 12-step rails offer plenty of flexibility, and if your memory modules happen to be particularly tall, raising fan position requires just a simple pull. It is an effortless mechanism that works really well, and something that helps set the A500 apart from its immediate rivals. For those preferring to keep the fans at their default height, note that memory clearance is then limited to 45mm; we had to raise the fans just a fraction to make room for our G.Skill Trident Z sticks.

Is there anything we'd change? Well, while the ratcheted fan brackets help simplify installation, they do have their drawbacks. The sheer amount of black plastic lends the cooler a bulky aesthetic, and given that overall dimensions stand at 144mm x 169mm x 171mm, we're surprised to find that the bundled ML-Series fans are 120mm, as opposed to the 140mm we're used to seeing on coolers of this ilk. Each four-pin PWM blower supports speeds between 400 and 2,400rpm, but due to the mounting system, do be aware there's no option to upgrade to 140mm fans further down the line. 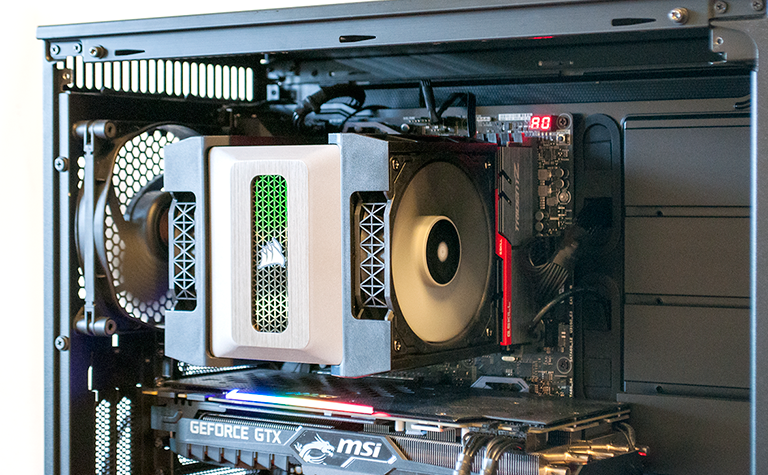 Ease of installation is high on the A500's list of plus points, and as you'd expect there's a splitter cable included to ensure both fans occupy only a single four-pin motherboard header. It's also worth pointing out that while the cooler is free of RGB LEDs, the mesh pattern on the lid does a decent job of reflecting other sources of light within a chassis.

There's no issue with regards to graphics card clearance in our test platform, however the big question mark that remains is performance. Corsair is using four direct-contact heatpipes in its aluminium stack - two 8mm and two 6mm - but can the A500 compete with the best in terms of both CPU temperature and noise? Only one way to find out.